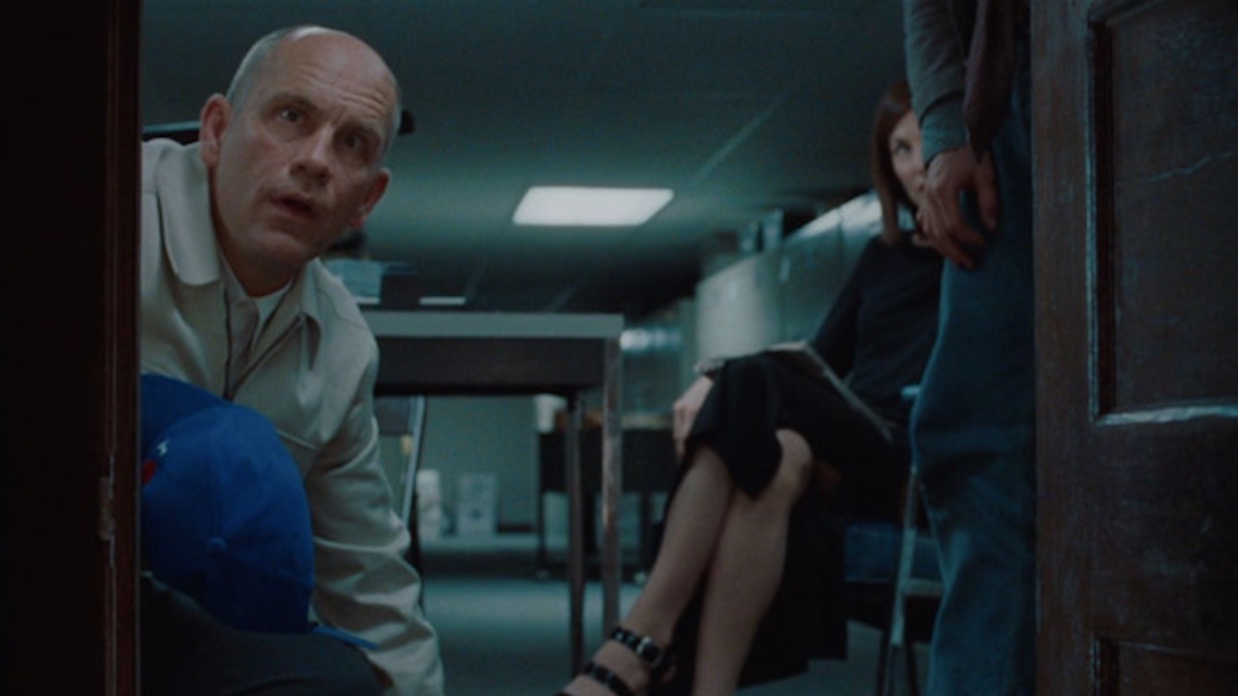 by Scott Macaulay
in Directors, Interviews
on Jul 7, 2019

In Spike Jonze’s future, you will be famous for 15 minutes. The catch? You will only be famous as John Malkovich. Confused? Don’t be. Being John Malkovich, Jonze’s devious debut feature, creates from our schizophrenic celebrity culture an original comedy that is as affecting as it is absurd. Scott Macaulay ponders the meaning of it all with Jonze and screenwriter Charlie Kaufman in an interview that originally appeared in our Fall, 1999 print edition.

There are auspicious debut films, and then there is Being John Malkovitch. Long a subject of film-geek gossip during its production due to its bizarre premise—a couple come across a “portal” which allows ordinary joes to live inside John Malkovich’s head for fifteen minutes at a stretch—and first-time director Spike Jonze’s hipster cred (his music videos for the likes of The Beastie Boys, Weezer and Bjork are mini-masterpieces), the finished film manages to be terrifically entertaining while subverting our expectations of just what a “Spike Jonze” movie might turn out to be. Aided by an utterly original screenplay by Charlie Kaufman, Jonze has eschewed celebrity satire and pop promo slickness for a matter-of-fact style that creates its own brand of cultural absurdism. But the film’s greatest achievement may be its wringing of real emotion from its Warholian conceit.

John Cusack stars as Craig Schwartz, a puppeteer who supports his craft by taking dead-end temp jobs. At one, located, hilariously, on floor seven-and-half, where employees walk stoop-shouldered due to the low ceilings, he meets Maxine, played with arch sexiness by Catherine Keener. A relationship only ensues when Craig uncovers the portal beneath the file cabinet. Soon, Craig, Maxine, and Lotte, Craig’s wife (a gloriously drab Cameron Diaz), are enacting the bizarrest love triangle of all through their increasingly frequent forays into Malkovich.

Blending philosophy with social critique in an almost offhand way, Jonze and Kaufman take their oddball premise and develop it into a perpetual motion machine of transferred desires, misplaced affections and cultural confusion. I sat down recently with Jonze and Kaufman to discuss their creative collaboration.

Filmmaker: So why John Malkovich? Why not make it Being Anthony Hopkins or Being Nick Nolte, or Being John Lithgow?

Kaufman: Malkovich just seemed right to me. He would be an interesting person to be that character. When I wrote it, I wasn’t working as a screenwriter, and I wasn’t thinking that he or anyone else would actually read it. I wasn’t thinking, can this be made? When I heard that [Malkovich] read it and thought it was funny, that was as big a thrill as I expected to have.

Filmmaker: Okay, so why puppetry?

Kaufman: I wanted the character to be an artist and be frustrated in his professional life—

Filmmaker: And puppetry is this great loser profession.

Filmmaker: Well, the puppetry in the movie is awfully good. You could have easily done bad puppetry and had the audience laughing at how pathetic it was. Instead, the puppet sequences are mind-boggling—they almost seem like animation.

Kaufman: I didn’t want to make a joke out of it, and Spike didn’t either. These puppeteers are very skilled people.

Jonze: [Phillip] Huber did most of it. He’s a full-time puppeteer, and his show is amazing, entirely done by strings. There are no rods, just strings and these puppets. He does an acrobatic act where this puppet swings on a high wire, and there’s another one that does a tight-rope walk, where he loses his balance and falls. He’s got a torch-singer puppet, a character he’s had for 30 years. He keeps building and rebuilding her, making her more and more elaborate.

Filmmaker: Spike, what was it like going from two or three-day video shoots to a feature? It’s a different energy than commercial work.

Jonze: That was hard. To make a video, you can start and finish in a month. But the movie business is much more challenging. To take a script and stay focused on it through the whole process…The shoot was 42 days. By the third week, we were so tired, and then by the fourth or fifth week we got our energy back. Physically, that part was hard, but creatively it was exciting. You’re feeding off of the script, which is really good.

Filmmaker: Do you think there’s a certain level of perfectionism that is harder to get on a film than a commercial?

Jonze: I’ve worked on videos and commercials where we had way bigger ideas than we had time or money. It’s still hard. It doesn’t matter how much you have—you never have as much money and time as you need. Even if a video is only three minutes, you might have 80 shots to do that day. Or you have four shots, but they are all really complicated.

Filmmaker: Lance Acord has shot many of your videos and Being John Malkovich, and, although I’ve only seen a workprint of the film, it seems like the visual style of the feature is very far from what you and Lance came up with on many of your videos, which are more pop-feeling and eye-catching. The movie has a darker look coupled with simple set-ups and framings.

Jonze: Yeah. We shot most of the scenes very simply. We didn’t have that much time to do them, and instead of breaking down each scene into ten setups, I wanted to spend my time getting performances from the actors. That was a conscious decision, but I thought it worked for the movie—not to make it big, flashy and overly into technique. Lance has actually done a lot of different stuff. We’ve done big commercials that are more polished, and then we did a video for Daft Punk that was natural light in New York City, all exteriors. Lance can confidently and quickly work with little equipment. And, also, he doesn’t care so much what his peers are going to think. Some DPs, they want to make things look a certain way so their peers will compliment them as opposed to making a film look a certain way because that’s what’s right for the film. Lance totally embraces what the idea of the film is.

Filmmaker: Wong Kar-Wai will take the biggest Asian female stars and then radically change their appearances. He’ll put them in wigs and glasses for the whole movie. Were you engaging in that sort of “meta-film” commentary with your casting of Cameron Diaz, who is plain and unrecognizable in your film?

Filmmaker: At what point did you talk to her about her look in the film, and how did you construct it?

Jonze: We talked about it from the beginning. I showed her pictures—I take a lot of pictures of people, just driving around the street, and I get wardrobe and character ideas from that. We wanted Craig and Lotte to be a struggling artist couple living in Brooklyn, and we wanted to take them seriously as characters, make them as real as possible. You know how couples end up looking alike after they’ve been together for a while? I wanted them to look a little similar, and that’s where the [frizzy] hair came from.

Filmmaker: Charlie, one could say that Being John Malkovich is about questioning the nature of identity. And another script of yours that I’ve read, Human Nature, which is about a man who was raised by wolves, seems to ask the old question of how man is ultimately different from animal. Both scripts seem to riff on philosophical issues and treat them with broad, bizarre humor. Do you start with these ideas when you write, or do you start with the characters?

Kaufman: I start to write without any particular game plan. In fact, the Malkovich part of this movie was not even what I was writing at first. The thing that I started with was a married man who fell in love with somebody else. That was the beginning. Everything else came later. I don’t start out by saying, “This is a movie about identity.” I just have certain things that I am anxious about, and they wind up in my script.

Filmmaker: How structured is your actual writing process?

Kaufman: I just start with an idea and then connect it to another idea, and then figure out who the characters are, and what would happen if this happens here and that happens there.

Jonze: That’s why Charlie’s scripts are fun to read. When I first read the script, it just kept going to different places, and that probably comes from Charlie not knowing where he’s going.

Filmmaker: The Hollywood version of this movie would end with the characters realizing that they have to be themselves.

Kaufman: Well, God forbid! I don’t want to subscribe to that, and I certainly don’t want to tell anybody what they have to be. I guess it is possible that people will think that’s what the movie’s about.

Filmmaker: That’s not where the movie leads you. That’s the Ron Bass version of your story.

Kaufman: I prefer that things are complex, so that when you leave the theater, there’s something to talk about, think about.

Filmmaker: You seem to have made a conscious decision not to make a music-driven movie, or not to incorporate the kinds of things people would expect a “music-video director” to bring to a movie. When you do music videos and commercials, you, Spike Jonze, are selling to the client a concept of “cool” or “hipness.” And now you’ve made a movie which, in its own way, is very hip, but doesn’t have the trappings of what mainstream culture thinks of as being hip today.

Jonze: I know what you are saying. I didn’t think to myself, “I don’t want a soundtrack record,” but I didn’t want to have to cut to pop songs. That’s a convention I didn’t think was right for the story.

Filmmaker: It all goes back to one’s relationship to irony. There’s a sort of ironic conceit to the movie’s concept, but it is not a very ironic movie.

Jonze: I hope not.

Filmmaker: And a lot of what people consider “hip” is actually deeply ironic. It does seem that amiss all of the crazy humor of your film, there are serious issues which are being worked out.