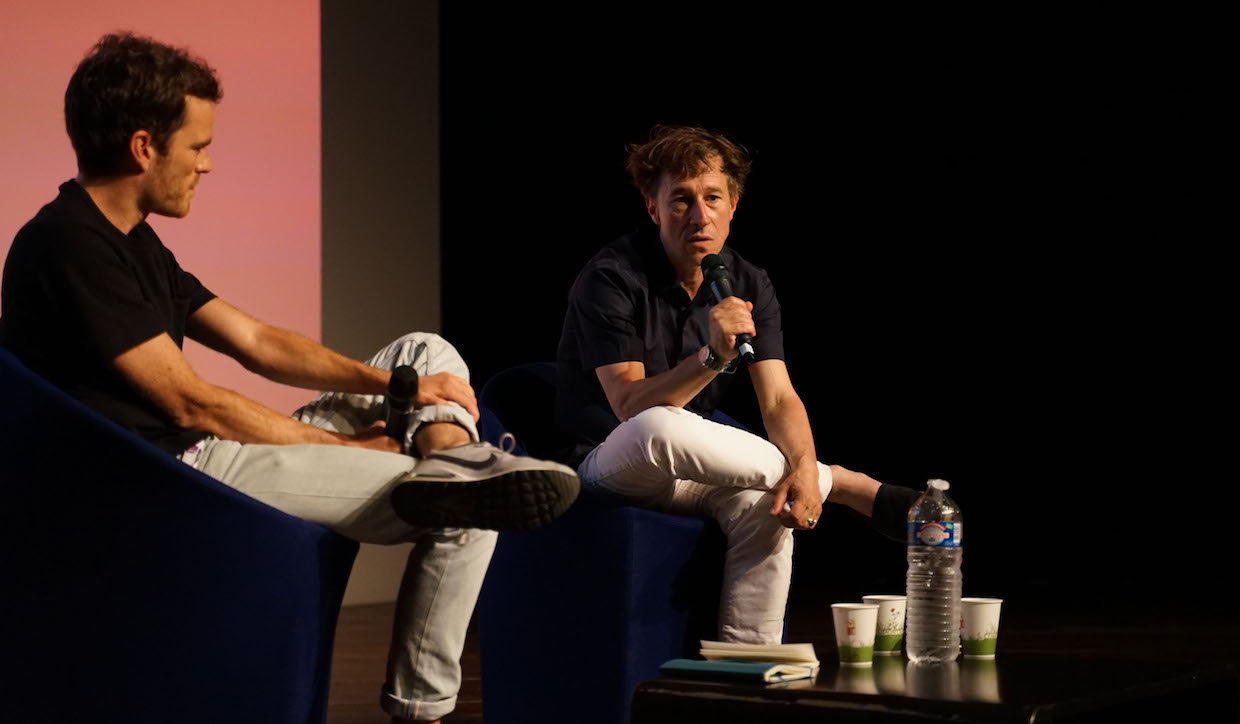 Bertrand Bonello, cinephile filmmaker, is not one to conceal his references. On War, with Mathieu Amalric in the lead as a director called Bertrand, quotes from Apocalypse Now at length, House of Tolerance transplants Hou Hsiao-Hsien’s Flowers of Shanghai to belle époque Paris and Nocturama concocts a beautiful synthesis of Carpenter and Romero. Yet, as the disparity of these citations indicates, Bonello’s shapeshifting, consistently surprising cinema makes it difficult to pinpoint what might have been his formative influences. Had I been pressed to try, I wouldn’t have come up with Pasolini, so it was a surprise to discover that his debut, the manifesto-like Qui je suis, is an adaptation of PPP’s autobiographical poem “Poeta delle ceneri.”

The Bonello retrospective at this year’s FIDMarseille included the extremely rare short, made in 1996 when the director was 28 years old and still primarily working as a session musician. As he owns the sole extant copy on a Betacam tape and only lends it out on the condition that he be there to introduce the screening, it made for an apt prelude to his festival masterclass. This stipulation seems motivated by a measure of embarrassment on Bonello’s part, at least with regard to the film’s formal worth. He contextualized it as a “very DIY” experiment shot on video and 16mm without a concrete plan beyond paying homage to Pasolini’s text, concluding that “even if the film isn’t very good, this language and these words are splendid, essential, fundamental.”

Across the film’s 41 minutes, the theater actor Laurent Sauvage reads the full 40-odd pages of “Poeta delle ceneri” in a feverish uninterrupted monologue. Bonello illustrates the text by intercutting between close-ups of Sauvage and segments filmed in Italy—the Friulian village of Casarsa where Pasolini spent parts of his youth and whose natural beauty inspired his early poetry; the grave of his brother Guido, killed at 19 while fighting as a partisan; the medieval tower near Viterbo he dreamt of buying (which he eventually did)—as well as clips from Pasolini’s films, historical footage of the Fascist and postwar eras, shots of Bonello and his friends, and intertitles bearing quotes from the poem.

It wasn’t necessary for Bonello to be quite that humble in his pre-screening introduction. While the short might lack the polish characteristic of his later work, as an essay film it is very successful in conveying the galvanizing power of Pasolini’s texts and films, that incandescent fusion of poetry and political fervor which has rendered him such an inspirational figure for four consecutive generations, especially among youths. There’s a stirring nakedness to Qui je suis that reflects the poem’s confessional tone and the unvarnished style of Pasolini’s filmmaking. When Sauvage recites a verse that posits cinema as a search for language and therefore a philosophical experience, the film cuts to a clip from The Gospel According to St. Matthew of Jesus bathed in light, his arms spread wide and face turned skyward. In their candor, such moments make palpable the passion that Pasolini’s words ignited in the budding filmmaker.

As Bonello described during the masterclass, he later became very rigorous in the preparation of his films, always following a process kick-started by an epiphany: “I have ideas every day, but suddenly I’ll be overcome with the realization that one specific idea, and no other, will be my next film. This is never a subject, or a story, or a character. It arises almost as a totality, and as a form. Not in the sense of how I will shoot it, but in the sense that, while another filmmaker might have the same idea, mine is coupled with a specific way of telling it.” He cited Zombi Child’s genesis as an example. Although he had long been familiar with the figure of Clairvius Narcisse, whose story frames the film’s central plot, it was only when he became cognizant of Narcisse’s fundamental solitude—as someone condemned to wander Haiti alone for 16 years, incapable of returning to his loved ones—that he felt compelled to make Zombi Child, with this solitude informing the trajectories of both narrative strands.

When the idea has crystallized, he takes a single sheet of paper, always A4—“I’m quite obsessed with A4 pages”—and begins to visualize the film by jotting down its most important elements. For Nocturama, “the page was split in two, just like the film, and I wrote down, ‘Interior/exterior; characters who walk/characters who wait; day/night…’” Once he can see it all there on the page, he writes the script. “I don’t do the whole thing of coming up with a synopsis, then a treatment, and so forth. I find that process too disembodied. I immediately start writing and I write very, very, very fast. Inevitably, my first draft is very, very, very bad, but I have to find the fundamental scenes—not fundamental for the plot, but for my desire to make the film. Later, every time I get lost, I return to these scenes. They’re there in the script’s first draft and they’re there in the tenth. Once I’ve found them, the rest is just work: elaborating these scenes, linking them together and building a structure around them.”

These fundamental scenes sometimes amount to a single image or a needle drop, such as the sex worker crying tears of sperm or the group dance to The Moody Blues’ “Nights in White Satin” in House of Tolerance. In fact, all the music is chosen during the scriptwriting stage. If Bonello feels that a scene needs original music, he’ll take a break from writing, go to his music studio and “start looking for the timber, the sound, the three notes, the texture. Then I go back and keep working on the scene, and then I’ll return to the studio, and back and forth like this. When the script is finished, it says very precisely, ‘This song starts at this point; it ends there…’” Adding new tracks during the edit would amount to illustration, rather than having the music function as an intrinsic component of the storytelling. Whenever other directors have invited him to score their films after the images were already shot, it didn’t work because he wasn’t able to find a way in.

Bonello recognized that this conception of a film as a holistic, closed-off entity often carries over on a narrative and thematic level in the form of a huis clos—On War’s cult, Nocturama’s shopping center, Zombi Child’s boarding school and, most obviously, the late 19th century brothel of House of Tolerance. That was also the rationale behind the latter’s closing shot, which relocates the film to the modern day and shows Clotilde, the sex worker played by Céline Sallette, working the streets in a dismal image that contrasts starkly with the hitherto exceedingly lush aesthetic. This finale proved very controversial—Thierry Frémaux, Cannes’ artistic director, asked Bonello to cut it, though the film still made it into the main competition after he refused. “A lot of people thought I was glorifying the brothels of the time, holding them up as an ideal against today’s prostitution, but it was actually much simpler than that. I felt I couldn’t end inside the brothel but needed a contrast. I wanted to burst this bubble I had created for two hours, to wake the viewer up, and that wake-up is the return to the present.”

By belonging to the world of the film, Clotilde is bound by its rules. As such, what Bonello finds so moving about the finale, which was one of the “fundamental scenes” that came to him very early, is that the character is condemned to be a sex worker forever. He elaborated on his penchant for creating autonomous worlds by drawing an analogy to the cinema as a physical space that temporarily cuts us off from reality, “a dark box that allows us to project ourselves into fantasies. At one point, my films become such boxes. Initially, the separation is merely geographical, then it becomes more and more psychological. The concept of the huis clos offers me the freedom to reorganize our world inside another world, to rethink the rules, be they political, social, romantic… And, very often, my films end with the realization that refusing to accept reality is a utopia.”