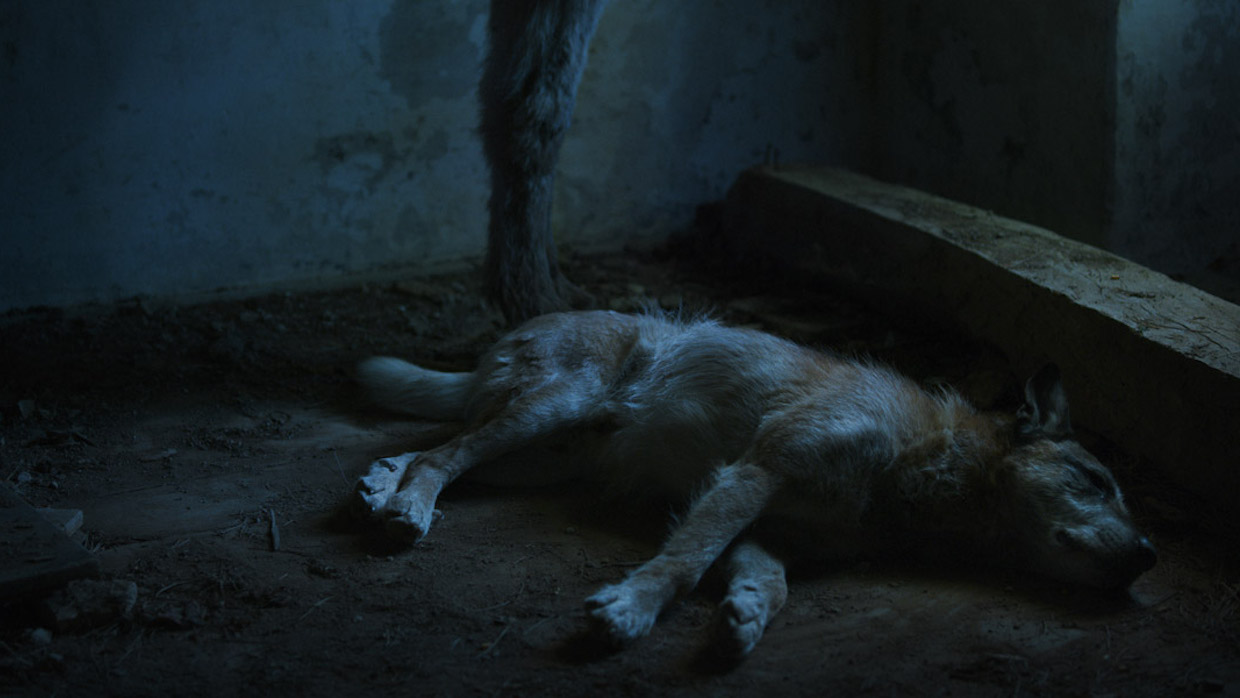 As Giovanni Marchini Camia notes in this valuable, context-providing review/interview of I Was at Home, But…,  Angela Schanelec’s fourth feature, 2001’s Passing Summer, was the first to give rise (in a Die Zeit review) to the term “Berlin School,” an imprecise but generally accepted designation for contemporaries including Christian Petzold, Maren Ade, Ulrich Köhler, Christoph Hochhäusler, Thomas Arslan et al. As Camia also notes, Schanelec’s relationship to this term is tense; her work is the most overtly severe, and it’s taken her longer to break through than her highest-profile peers. Internationally, Schanelec didn’t receive significant recognition until her ninth feature, 2016’s The Dreamed Path, until which her work was generally received with indifference and hostility: Variety‘s Derek Elley took a weird amount of persistent pleasure in repeatedly ripping on her work (“Imagine the worst excesses of ’70s German cinema crossed with Chantal Ackerman [sic],” “Germany’s poetess of emptiness”), as if he had identified the single most truly unbearable manifestation of arthouse pretension that doesn’t have a leg to stand on. If such persistence in returning to decimate marginalized work is weird, the general reaction isn’t inexplicable.

Relative to Dreamed Path‘s decades-plus sprawl, which skipped over variable chunks of years with almost zero markers beyond background period details and its protagonists’ aging appearances, I Was at Home is accessible: confined to a limited timeframe, establishing its main characters and their relationship to each other reasonably speedily if not linearly—writing those out in synoptic form almost feels like cheating. We see Astrid (Maren Eggert) running to school to console her son Philip (Jakob Lasalle), and only slowly piece together that he’s run away and come back; it takes even longer to discern that Astrid is two years out from the death of her theater director husband. There are three general threads: Astrid gingerly navigating daily life, in which the slightest event can trigger unexpected emotional ramifications; Philip at school, rehearsing a very Straubian production of Hamlet; a side plot that recurs at unexpected moments about one of his teachers, Lars (Franz Rogowski), in the endgame stages of a relationship that isn’t working out. The three strands echo each other, in ways both baked into the plot (the rhyming death of the father[s]) or more unexpected (a shot of Astrid and her children at the river, echoing Ophelia’s drowning)—it’s extremely pertinent that the Hamlet being performed is from a translation done by Schanelec and her own late theater director husband, Jürgen Gosch.

At a memorably hostile screening of Path, Schanelec advised viewers that “You don’t have to think. You can just watch”—meaning, among other things, that treating her work as a kind of beyond-Gaddis nightmare that has to be scrutinized closely to make all the puzzle pieces fit properly is not productive. From the get-go (a prologue of a dog chasing a rabbit, observed by an inevitably Bresson-evoking donkey), the images are extremely pleasurable and satisfying in and of themselves, with all kinds of details in the framing that can be scanned but without the ostentatiousness of tableaux filmmaking a la Tsai Ming-liang or Roy Andersson. An obvious, easy-to-describe example is a night sky shot, the camera staring up from a graveyard: tree branches frame off one blinking star, its pulsing punctuated by the happy accident of a silhouetted bird flying back and forth, presumably culled from letting the camera roll until something magical happened. Describing many such shots would be a Bordwellian task I’m not up for; ditto the extremely careful sound, presumably a Bressonian mix of foley and recorded, where shoelaces being untied or pants being pulled up take on intricately-mixed-electronica dimensions.

I keep bringing up Bresson, but that’s unavoidable. If Dreamed Path unfolded in a sometimes hilariously anti-naturalistic register, I Was at Home explores a sliding scale of screen performance. On one extreme end there’s the children’s Hamlet, on the other Eggert’s intensely lived-in, grief-stricken performance. In the middle, there’s the film’s showcase scene, a 10-minute walk-and-talk in which Astrid berates a visiting director (Dane Komljen) for (what she’s seen of) one of his films. The scene she’s flaying is one where a dancer interacts with a real terminally patient, and Astrid goes off, her reasoning straight from Bresson: “When an actor acts, he lies,” truth comes from the reality of the body rather than the imposition of character and dialogue, the confrontation is between falseness and truth, etc. The irony is obvious: that most artificial form, a painstakingly memorized and delivered monologue full of emotional subtext Eggert must convey at precise moments, is used in vigorous defense of the Bressonian mode Schanelec practices sporadically here and throughout The Dreamed Path. For her (as with, weirdly, Bertrand Bonello), the surest conduit to fusing the two modes is having actors/their characters respond to music (here, a charming dance performed by Astrid and children to M. Ward covering “Let’s Dance”), when the performance/emotional truth boundary is finally crossed and the two become one—bodies don’t lie, especially not dancing ones. Schanelec is engaging seriously with ideas about screen acting, refining her own rather than aping an important influence, and she doesn’t settle on one answer; comparing her to Bresson is not meant to be reductive or definitive.

There is a devastating scene of Astrid flipping out at her kids, a textbook harried-mom-loses-it scene that isn’t a setup for the usual emotional arc release of a reconciliation scene later—nothing here is going to lead to a “payoff.” But all this makes I Was at Home sound painful and/or theoretical, even though I’m sure the inevitable stream of walk-outs would disagree. I take considerable pleasure from Schanelec’s images and am similarly hypnotized—and sometimes extremely startled—by her sounds. The world she builds is often unexpectedly funny, proceeding from the correct principal that the best jokes are those that emerge where none was expected—a recurring plotline about buying a malfunctioning bicycle indulges the opportunities for physical comedy the unwieldy object provides, and the moment it’s dropped by Eggert with great venom got a rare actual laugh out of me. I abstractly admire filmmakers like Schanelec, who work from a rigorous and personal conception of film that has zero time for market niceties or unexamined storytelling norms, but I also enjoy watching it in a way that’s much more visceral than cerebral.

Bertrand Bonello’s international breakthrough came on his fourth feature, 2011’s House of Tolerance; I haven’t made my way backwards through what preceeded. A very different kind of cineaste, Bonello composes his own, excellent John Carpenter-ish (sorta/kinda) scores and doesn’t disguise his reference points. The first half of Zombi Child parallel edits long sequences from 1962 Haiti and contemporary Paris. In the former, one Clairvius (Mackenson Bijou) dies, is brought back to life as an enslaved zombie worker (aren’t we all under capitalism, har har); in the present, Mélissa (Wislanda Louimat) attends a super-luxe-y private school where all fellow students are the daughters, granddaughters or grand-granddaughters of those who had the Legion of Honor or similar honorific conferred. The dialectic between colonial past and only-superficially-resolved present is pretty clear, and I enjoyed the rhythmic back and forth—as with I Was at Home, there are more exquisitely rendered outdoor nights, with shades of gray extremely close to Twin Peaks: The Return‘s darkest passages, for the Haiti bits. (It’s important to see movies in good projection conditions! Links don’t meaningfully cut it!) At the private school, Bonello goes to the locker room twice, inevitably enfolding a chaster slo-mo Carrie homage along the way, but the dialogue is blunt in its themes. A professor delivers a long introductory lecture on France as a state both defined by being revolutionary and its failure to live up to same, getting deep into accurate if highly theoretical weeds (meanwhile, back in the Haiti plotline, the subaltern literally cannot speak).

Like Schanelec, Bonello enjoys musical numbers of a kind as well—“Nights in White Satin” in Tolerance, Yves Saint-Laurent first meeting his dream model on the dance floor to CCR’s version of “I Put a Spell on You,” a karaoke rendition of “My Way” in Nocturama—and a similar highlight here is Mélissa, sitting, listening and occasionally dancing to this. When the parallel storylines stop converging, Bonello goes for full fever dream finale, but it seemed mostly theoretical (and, honestly, conceptually half-baked). I’d unpack it further, but I lack the reading background to try or the urge to fake it through internet research—Bonello is definitely engaging with historical particulars, but the bizarre final title cards about how many zombies suggest a “for further information, Google this” path I’m choosing not to follow.

Takashi Miike has lived long enough to be accorded (at least in press releases) the label “legendary auteur,” which is kind of funny—with him, aging into automatic respectability didn’t seem guaranteed. Miike started churning out films at an infamously prolific rate in 1991, long before his international breakthrough, 1999’s Audition. His reputation established, finer video stores made as much of the back catalogue available as Region-0-possible while distributors played supplementary catch-up with the present. I quickly got the idea: his baseline efforts are definitely cult movies, in the sense of containing outrageous segments that play well out of context sandwiched by a lot of other, less exciting material. This proved true more often than not regardless of the ostensible genre, so I’ve gotten into the habit of checking in once every three years or so, which seems about right for the rate of return. Recent-ish efforts I’ve checked out (Thirteen Samurai, Hara-kiri, Yakuza Apocalypse) demonstrated a preference for filming as much as possible on large soundstages, presumably to make things easier—otherwise, the mix of genres and subjects remains too heterogenous to get a read on Miike’s true driving predilections.

The yakuza genre is one Miike’s revisited a lot (including most of the plot line that lead to the legitimately startling and fantastic final face-off closing 1999’s Dead or Alive), although really it’s just the starting point for First Love. Not really a yakuza movie (even if the dialogue does cite Ken Takakura), First Love sets into motion an extremely complicated tangle of plot threads, with the ultimate goal of converging all parties—a yakuza gang, a Chinese triad, two innocents drawn into the melee, police, a one-armed assassin et al.—into a hardware store (the soundstage component, I presume) for a climactic extended one-set take on Die Hard territory. Where some of Miike’s more feverish work can be legitimately surreal, First Love traffics in a more familiar flavor of “dude, that was awesome”: guns being tossed aside in favor of combat with samurai swords, outlandish head severing etc. Proficient at casually elegant widescreen composition as Miike is, First Love is, for all its mayhem, fairly relaxed. Miike doesn’t sweat the big action setpieces, filming each individual fight or encounter competently but without building any larger rhythm or momentum, filling out the margins with typically eccentric, sometimes extremely funny/not on-task moments of characterization. At the end, an impossible car stunt is rendered as manga-esque drawing, which is both a moment primed to provoke squeals of “coooool” and a cost-effective measure—Miike knows precisely what he’s doing, and the results are low-key fun.