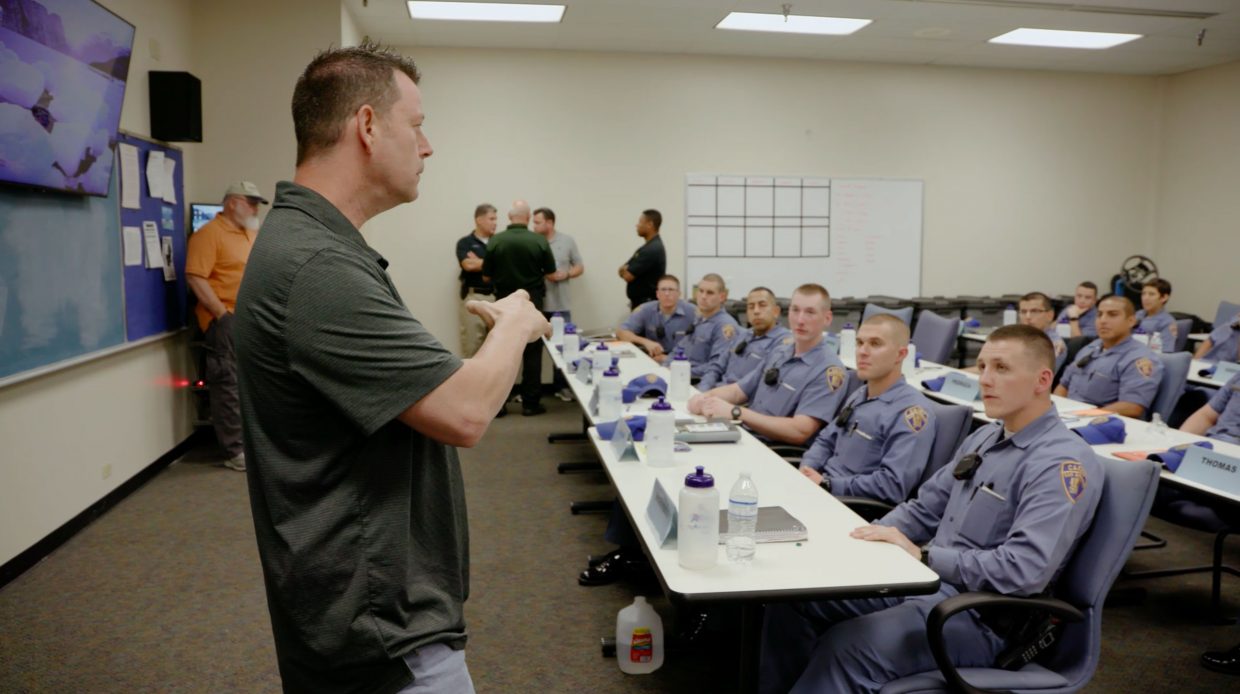 by Lauren Wissot
in Directors, Interviews
on Nov 19, 2019

Winner of the Special Jury Prize at this year’s SXSW, Jennifer McShane’s Ernie & Joe: Crisis Cops is an eye-opening look at the game-changing San Antonio Police Department’s Mental Health Unit through the daily activities of two of its humble leaders. It’s also a master class in policing done right.

At first glance the partners-in-fighting-crime protagonists of the film’s title seem straight from Cops central casting — hetero white macho males, one a military vet. But McShane swiftly disabuses us of any preconceived notions we might have with her very first, quite shocking scene, one in which the unassuming heroes respond to a call to escort a distressed schizophrenic man from a government building. Rather than go in with guns blazing the crisis cops do the exact opposite — casually chat with the man while calmly hanging back, ask him what’s wrong rather than telling him what he must do. In short order the two plain-clothed strangers have managed to firmly gain the hallucinating guy’s trust — enough that he just simply walks out the door with them. No handcuffs, let alone tasers, required.

For Ernie and Joe are he-man poster boys for the radical idea that empathy is not only compatible, but necessary, when it comes to law enforcement. (Or at least radical to me. Racial profiling is indeed very real, and because of this a lot of us who only know police officers through cellphone video images have admittedly developed blue profiling in response.) McShane (Mothers of Bedford, A Leap of Faith) found the time to fill us in on her doc, and its place in the larger criminal reform conversation, prior to the film’s November 19th HBO debut.

Filmmaker: So how did you discover this story? Were Ernie and Joe always going to be your main characters?

McShane: I learned about the work happening in San Antonio in a great piece in The Atlantic written by Anne Snyder, a friend. In that article the Mental Health Unit of the San Antonio Police Department was featured. I flew out a few months later and rode along with Ernie and Joe without a camera to better understand the work and them as individuals.

I knew pretty quickly that they would be incredible characters to help me tell this complicated story. Ernie and Joe are two members of a 15-person mental health unit (10 at the time I was filming), but there is no way to tell a character-driven story with that many characters. Focusing on one set of partners made sense. Plus they were comfortable on camera and had great banter with each other.

Filmmaker: What limits were placed on the filming, both from the department itself and from Ernie and Joe personally? I assume there are certain things you wouldn’t be allowed to portray for safety reasons, like the locations of Ernie’s and Joe’s homes. Did anyone ask to approve the final cut?

McShane: No one ever asked to see a final cut, and I have to say access was excellent. I was welcome in their homes, though, yes, I blurred their addresses for safety and privacy reasons. But that was it.

Filmmaker: Though Ernie and Joe are masterful at deescalating conflict there are inevitably going to be dangerous situations when it comes to policing. Were there moments when they asked you to put down the camera in order to avoid increased risk to those in front of and/or behind the lens?

McShane: It was very important to me that our presence not disturb the rapport that Ernie, Joe and other mental health officers develop on these tense calls. I was always aware of those issues, and consistently kept our camera at a respectful and safe distance.

Filmmaker: How did you go about getting permission from the people in crisis that appear in the film? Were there times when you just decided not to ask and not to show?

McShane: It was a case by case situation. I was not interested in getting releases from someone if they were unwell, or not stable enough to sign or understand. So in many cases I blurred faces, and some I decided not to show.

There is one dramatic scene on a bridge, and in that case I obtained dash-cam footage. The city would only release it to the person involved (which I fully support). I spoke to the woman and explained why I wanted to use it. To my amazement she strongly encouraged me to use it because she felt more people need to understand someone in her situation. She then allowed me to continue following her and was fully aware and able to participate.

Filmmaker: It struck me as I was watching the doc that though Texas is a tough-on-crime state it’s also home to rising-star, progressive policymakers like Beto O’Rourke and Julián Castro, who is from San Antonio and served as the city’s mayor. Did you get the sense that Castro and/or likeminded politicians were forcing reforms like the Mental Health Unit on to a recalcitrant SAPD, or was the department fully onboard with such a novel program?

McShane: Police Chief McManus and the SAPD have been building this mental health unit and expanding their training for years. The reason I believe it works at all is that they understand that this involves more than training police officers. It requires true collaboration between civic stakeholders, something sadly lacking in many cities.

The city has plenty of work left to do, but at least it is looking forward and trying to plan strategically. One thing that particularly impressed me were the roundtable meetings held every month in which law enforcement, hospitals both private and public, mental health community organizations and others sit together to discuss what is working and what isn’t.

This program grew out of San Antonio’s problem with very overcrowded jails. When officials acknowledged that many of those behind bars were suffering with mental health challenges the discussion was reframed and a 24-hour treatment center was built rather than a new jail. My sense is this grew out of pragmatic collaboration rather than anything being forced top-down. The program was already underway before Julián Castro became mayor. My understanding is that he was supportive, but was not at the forefront.