Leading up to the Oscars on Feb. 24, we will be highlighting the nominated films that have appeared in the magazine or on the Website in the last year. Scott Macaulay interviewed No End in Sight director Charles Ferguson for the Summer ’07 issue. No End in Sight is nominated for Best Documentary. 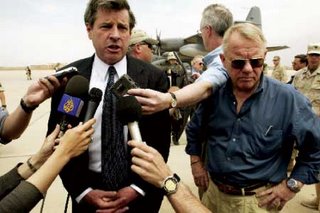 In the current debate over the Iraq war, Charles Ferguson’s debut documentary, No End in Sight, takes what is perhaps the most troubling position of all: the war could have gone right. Largely sidestepping questions about the justness of the war and focusing on the few months leading up to and immediately following the invasion, Ferguson pinpoints the mistakes that laid the groundwork for the current conflict. And while it’s commonplace to view Iraq’s violent civil strife as being just as inevitable as the discovery of WMDs was once believed to have been, Ferguson assembles a convincing group of talking heads — including General Jay Garner and Deputy Secretary of State Richard Armitage — who assert otherwise and lay blame accordingly. click here to read full story