“Should You Give the Person a Hug, or Should You Continue Filming?”: Benjamin Ree on His Art World Crime Doc The Painter and the Thief 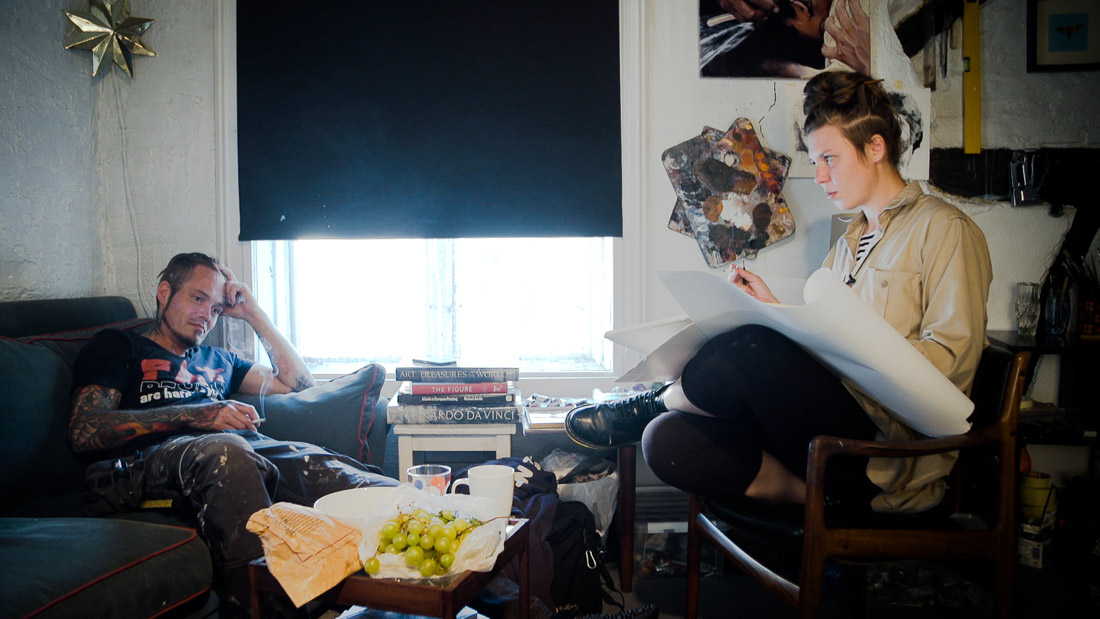 The Painter and the Thief

by Lauren Wissot
in Directors, Interviews, Sundance
on May 23, 2020

The following interview with director Benjamin Ree about his documentary The Painter and the Thief was published during the 2020 Sundance Film Festival. It’s being rerun now to coincide with the virtual cinema and VOD release of the film from NEON.

Spectacularly cinematic and employing a risk-taking structure that keeps the viewer as off-balance as the film’s emotionally fragile protagonists, The Painter and the Thief is the second feature-length doc from Norwegian director Benjamin Ree. (Ree’s prior film Magnus, a coming-of-age tale about the chess prodigy Magnus Carlsen, premiered at the Tribeca Film Festival in 2016.)

The film follows the stranger-than-fiction story of Barbora Kysilkova and Karl-Bertil Nordland, the former a Czech naturalist painter living in Oslo, the latter a Norwegian ex-con struggling with drug addiction. Their worlds collide when Nordland and an accomplice steal two of Kysilkova’s artworks from a local gallery, resulting in the men’s fast apprehension but not the recovery of the paintings.

Instead of leaving things to the authorities, however, the curious artist approaches Nordland at his court hearing. While he gives up no information as to the whereabouts of the missing pictures, he does agree to her request to paint his portrait. And sit for her he does. Over many years, many portraits, and many twists and turns in their separate but ultimately intertwining lives.

To find out more about Ree’s unconventional approach to a highly unusual story Filmmaker caught up with the director a few days before the film’s Sundance (World Documentary Competition) debut on January 23rd.

Filmmaker: So how did you come to make a documentary about Barbora and Bertil? Did you know Barbora prior to the theft?

Ree: I did research on art robberies, and that’s how I learned about the story. It was on the front page of the biggest newspapers in Norway. A friend of Barbora had documented her before the actual robbery, so we did have footage from the very beginning.

It took a little time to get filming access to Barbora and Bertil. I think I began filming them after the two of them had met four times. I am very happy about being able to film them so early in the process, though. I think that shows in the film — as you really see how their special relationship evolves from the beginning.

Filmmaker: What were the biggest challenges in following these often emotionally precarious protagonists over so many years? Did you ever worry that the camera might do more harm than good?

Ree: The biggest challenge was to watch people suffering emotionally and to film that. I think that’s a huge dilemma for a documentary filmmaker. Should you give the person a hug, or should you continue filming? Most of the time I continued filming, before I gave a hug towards the end. The reason I did this was that we had a common understanding that it was important for us (Karl-Bertil, Barbora and me) to document the uncensored, rough reality they were facing.

Filmmaker: The film is not only strikingly cinematic but unusually structured. How did you decide on the overall aesthetic?

Ree: I came up with the idea early in the editing process. I thought a lot about wanting to show Bertil as the complex and intelligent guy that he is. I couldn’t achieve that without seeing the world from his point of view.

I got the inspiration from a therapeutic, practical exercise where you are challenged to see the world from your own and another person’s perspective, and you change this many times during the exercise. This therapy (perceptual perception) has made a huge impression on me. So I tried to apply that to the film. The same with the voiceovers — they were very inspired by how people talk in psychoanalysis, with the stream of consciousness. So I tried to “interview” them in this way and hope they’d feel free to speak in an open and introspective way.

I was also very inspired by the silent films Man with a Movie Camera and The Phantom Carriage — how they dared to find a form and structure that worked well with the theme and story. And this they’d done already in the 1920s. That was very inspiring.

Filmmaker: Considering how artistic this film is, I was surprised to learn that you actually began your career with the BBC and Reuters. So how does your journalism background inform — or not inform — your film work?

Ree: I have learned a lot about people, politics and the world from working as a journalist, but being a filmmaker is so different. In journalism I try to answer all the questions in a news story, which is so different from the feature doc filmmaking I do, where my focus is to ask questions rather than answering them.

Filmmaking for me is to try to ask questions that are intellectually stimulating and emotionally engaging in a cinematic way by observing human behavior. Since my background was from journalism I had to learn film language and relearn what I thought about storytelling. This I did when I made my first feature Magnus. That was my film school in a way. There I understood that I could transfer the interviews to a universal, nonverbal cinematic language. But I also have to add that I have made films since I was 11, so I have had a huge film interest since I was a child.

Filmmaker: Though your films screen internationally, your first feature Magnus is, like your latest, a Norwegian tale. Do you prefer to tell local stories? Is it just easier to get financing?

Ree: I like to tell stories from Norway. It’s here that I know the people and read the news. But if I get to tell a story abroad I would be happy to do that as well. But it’s so much easier to film someone when you live in the same city as them. If something happens you can just go there and shoot. That’s what I did with The Painter and the Thief. Something dramatic happened all the time, and I could just leave my home and run to the place with a camera. That has been helpful, capturing these decisive moments in Barbora and Bertil’s life.