“Documenting the Scene on Camera is Sort of Like a Dance With the Subjects”: DP Kristoffer Kumar on The Painter and the Thief 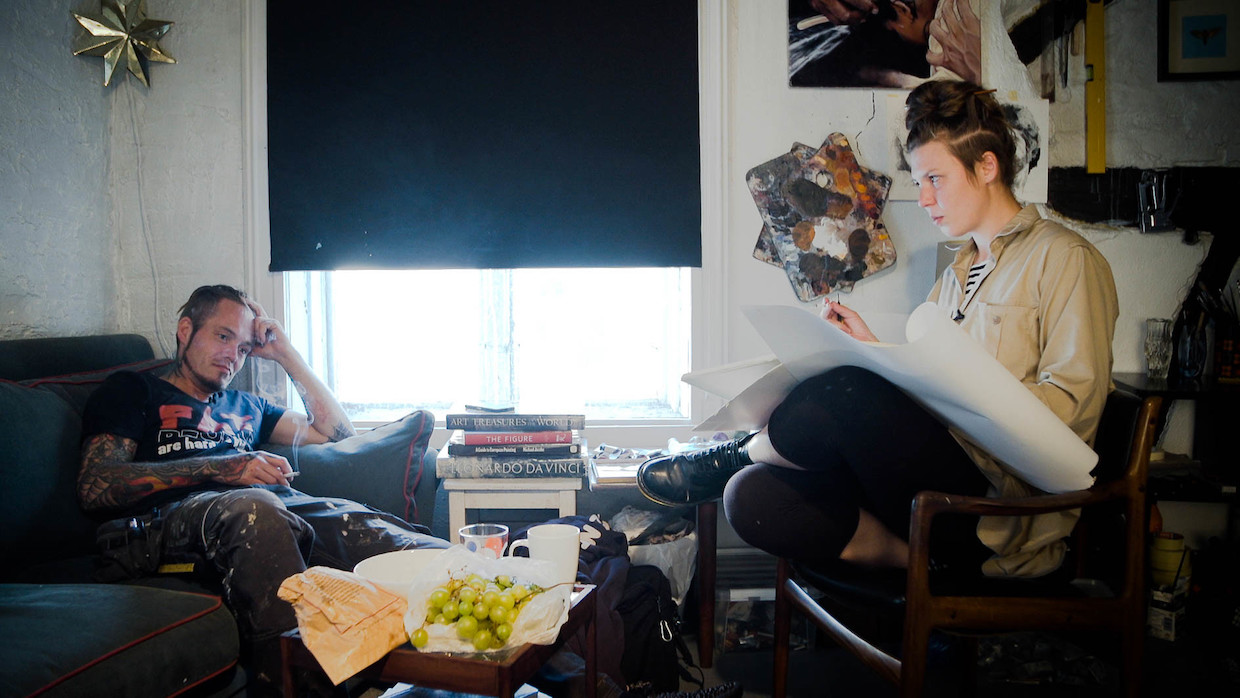 by Filmmaker Staff
in Interviews, Sundance, Sundance Responses
on Jan 23, 2020

The Painter and the Thief is a documentary that investigates the legitimacy of conventional labels: criminal and victim, vagrant and artist, unstable and rational. It follows Czech painter Barbora Kysilkova, who had a naturalistic work of hers heisted from an Oslo art gallery, as well as Karl-Bertil Nordland, the man convicted for stealing it. Mysteriously, the painting was never recovered, but Kysilkova had a proposition for the man who made her work vanish—could she paint his portrait? What follows is a story about human connection and its infinite possibilities. DP Kristoffer Kumar, who has collaborated with Ree extensively, talks about the often difficult process of visually communicating tangible moments of intimacy, chaos, rage and hopelessness.

Filmmaker: How and why did you wind up being the cinematographer of your film? What were the factors and attributes that led to you being hired for this job?

Kumar: Benjamin Ree and I have been working together since he shot the pilot for his first feature documentary film about Magnus Carlsen, the Norwegian World Chess Champion. Since then we’ve worked together on both feature documentary films and editorial projects. We are a dynamic team that knows each other well. Benjamin directs with a clear understanding of how to shoot the film, being an experienced cinematographer himself.

Kumar: Nothing beats reality. From the first day of shooting the subjects, we realized that we’d never know how the days would end up and where they would lead us. To give the viewer the same feeling of intimacy as we felt with the subjects, we used light, portable equipment to be as flexible as possible.

Some scenes in the film portray a person in physical and mental chaos. To give the audience as intimate a viewing experience as possible, we’ve used a handheld camera, giving the viewer the feeling of being in the situation. There are also scenes that show our subjects when they are mentally and physically at peace. These scenes were recorded with observing shots on a tripod communicating the calmness of the subject’s state.

Kumar: We both started filmmaking as video journalists fifteen years ago, and taking inspiration from and working inside dramatic situations with a camera. For this project we have also been influenced by the Norwegian film Oslo, August 31st which uses a brilliant storytelling technique of first and third person point of view by switching between a handheld camera and tripod. We also found inspiration from the repetitive prison scenes in Sam Peckinpah’s The Getaway.

Kumar: The biggest challenge has been to try to predefine if the scenes represent calm or chaos, and from there decide how to shoot them. The production has given us plenty of surprises along the way, which has forced us to rethink our shooting.

Kumar: Painting as an activity is quite harmonious, even when it’s inspired by chaos. A lot of the film was shot handheld and on the go, and because of that, our choice fell on the Sony FS5 which is a strong camera easily adaptable for any situation. We took inspiration from our subject’s state of mind when determining how to shoot the film visually.

An example of this is that certain scenes with art thief Karl Bertil are shot in the streets of Oslo with a run and gun 24-105 Canon L lens, simply to keep up with him. For other scenes, for example when he’s in prison, with a quiet and contemplative state of mind were shot on a tripod using Carl Zeiss’ lenses with high bokeh effect. For us this adaptable setup has been crucial for having the flexibility to film in diverse situations-in the open public, in institutions and other locations.

Kumar: Our main idea has been to keep the locations as close to reality as possible and because of that a lot of the film is shot in low light with some grain to keep it authentic. On locations that were simply too dark, we brought LED lamps to make the room easier to document on camera.

Kumar: Sometimes situations happen out of the blue. The scene I’ll never forget is when Bertil, the art thief visits Barbora, the painter, and sees his portrait for the first time. When he sees the painting, during a period of low self-esteem, he realizes that Barbora’s image of him is as a strong, intelligent, beautiful man. This makes him very emotional, and he starts crying and seeks comfort from his new friend.

Documenting the scene on camera is sort of like a dance with the subjects, letting myself be drawn into their feelings without taking space in the room. By trying to analyze their feelings, I decided when to zoom in to a closer image of Bertil’s face, when to take a step back, and when to physically go closer as they hug for several minutes. It was a really remarkable situation.

Kumar: Looks-wise this is a classic documentary with a raw look. The colors blue and orange as well as the contrast have been enhanced in the grading, and it has a small touch of grain added to it.