Sundance 2020 Dispatch 5: Shirley, The Mountains are a Dream That Calls to Me, małni – towards the ocean, towards the shore 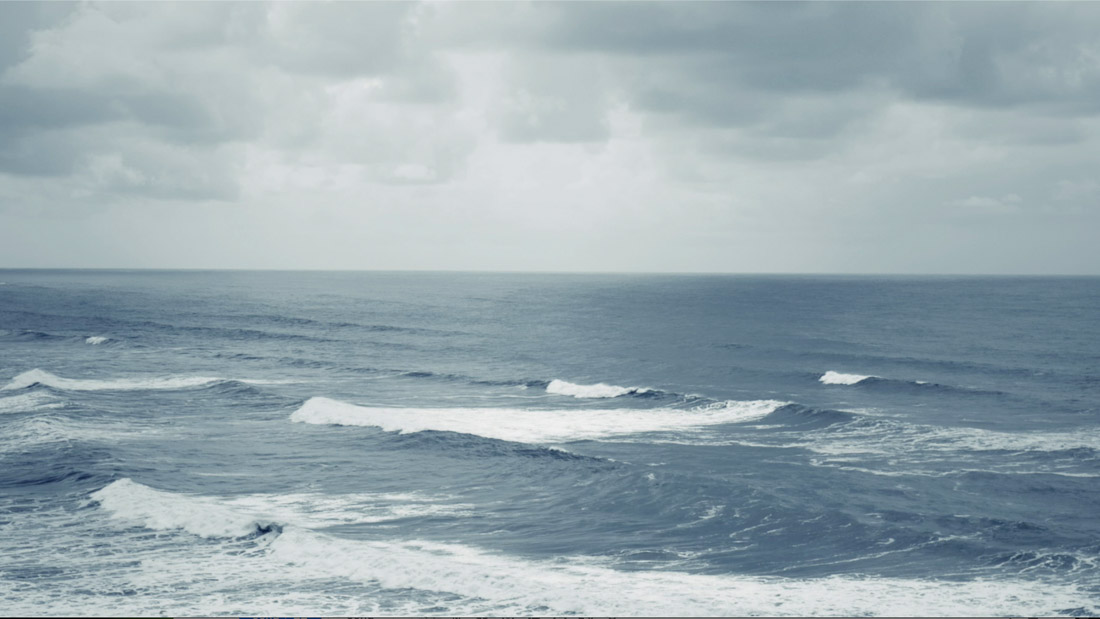 In one of those freak festival viewing coincidences that don’t really mean anything, Sunday started with two movies in a row opening with the sound of a reiki bowl. The higher profile one, Shirley, marks multiple firsts for Josephine Decker: first directed from someone else’s screenplay (by Sarah Gubbins, adapted from Susan Scarf Merrell’s novel), first period piece and—most crucially to my mind—first without DP Ashley Connor. The subject is Shirley Jackson; I’ve read two of her short stories (I’m not proud of that) and would be curious to hear how this plays for knowledgeable admirers. Adaptation or no, visually this is recognizably Decker’s work from the opening shot, that reiki ringing over an out-of-focus close-up traversing a patchy outline that could be anything—only as the pan continues left to right to a recognizable human head do we get oriented. While Shirley does, for a change, contain some static shots from time to time, it largely deploys her customarily radically handheld camerawork, which makes Claire Denis look positively staid, combined with equally destabilizing editing to create a constantly distressed subjectivity. And, like Decker’s previous narrative features, Shirley concerns a woman who may be “mad” in either the sense of being genuinely mentally ill, of being driven to mental distress by a society that’s toxic for women, or (more likely) a little from both columns.

Sometime in the late ’50s/early ’60s, Fred (Logan Lerman) and Rose (Odessa Young) arrive at their new residence, part of the former’s pursuit of academic tenure. They’re greeted by some of the most terrifying words known to man: “Welcome to Bennington.” The firmly agoraphobic Shirley Jackson (Elisabeth Moss) and husband Stanley (Michael Stuhlbarg) are their hosts, at least temporarily, but what’s supposed to be a stay of a few days until they can find a place of their own is extended indefinitely: the Jacksons’ housekeeper has left, and Stanley could use some housekeeping help around the house. Shirley doesn’t see the need for a housekeeper (“A clean house is evidence of mental inferiority”) but Stanley gets his way, as one suspects he often does–they have an open relationship, although his wife doesn’t seem thrilled. In short order, per Decker’s previous work, both madness and horniness (seemingly extremely close to each other on the spectrum of human emotions) prove infectious, with Rose sucked into Shirley’s world as the latter struggles to write a novel. Meanwhile, Stanley’s own extracurricular pursuits seem to rub off on Fred, who’s coming home late. Oh, and Rose is pregnant, and Shirley hopes it’s a boy—”The world is too cruel for girls”—which, presumably, is why she keeps deliberately dropping symbolic eggs on the floor.

I know more than enough about academia to have deliberately rejected that as a career path, so I’m not the target audience for a drama that hinges, in part, upon professorial infighting: Stanley swears to Shirley that David will make tenure track only over his dead body, which is actually about right considering the milieu but not that interesting to me. Sexually insecure Rose is haunted by visions of a local girl who disappeared, presumably under foul play circumstances, and sillier dreams of Bennington girls in bobby socks and saddle shoes acting vaguely Bacchanalian on the campus quad. While I enjoyed some of the waspish dialogue, I found myself having a listlessly checked-out reaction I’ve never had to Decker’s previous work, which whatever its flaws always was restlessly finding its way towards to a new visual language—here, the results, though absolutely recognizable as in keeping with her previous work, don’t feel as startling. This is a question of technical execution rather than of diluting a radical aesthetic: Connor’s images conjured up connotations of horror’s visual language, with extraordinary points of light emerging from disturbing darkness. DP Sturla Brandth Grøvlen Grøvlen can mimic her woozy close-ups of heads against out-of-focus backdrops, but the color scheme is flat and washed-out, more functional than exploratory side. On the performance side, Moss has given a lot of big performances lately in Alex Ross Perry’s films, but her Shirley, per script dictate, is more of a standard-issue tortured writer, prone to crumpling up sheets of paper and trashing them in frustration and lashing out when the work won’t come; Stuhlbarg, customarily an enjoyably eccentric performer, plays his line-readings mostly straight, and the two young ones they’re pitted against have even less to work with.

The other reiki movie, The Mountains are a Dream That Call to Me, was more my speed, traditional slow cinema in the Nepalese mountains. Interestingly, Cedric Cheung-Lau’s first feature, a much more tranquil affair overall, begins with a much louder reiki bell sound that continues for more time, digitally decaying as it dies down—it definitely gets your alarmed attention, and is repeated twice to signal act breaks. As with Shirley, the opening shot is defamiziliaring: a telephoto lens panning up a Nepalese mountain slope, so heavily flattened that it looks like a manageable small body, the camera making its way all the way up to the night moon illuminating it. What follows is more apprentice work than fully formed, but there are indications that Cheung-Lau has it in him to progress much further. The slender story intersects Tukten (Sanjaya Lama), a mountain guide, with Hannah (Alice Cummins), an elderly Australian backpacker recking on her own. They hike together part of the way and separate; Tukten occasionally runs into fellow guides while trying to figure out whether or not to head to Kathmandu en route to a chef job in Dubai. That’s about it plotwise, aside from occasional glimpses of a very non-threatening Yeti—a tall figure covered in leaves that turns slowly but never makes a sound or menaces anyone.

Gus Van Sant’s “Trilogy of Death” and the ongoing adventures of Kelly Reichardt aside, there’s not a ton of American slow cinema. Recently there was Christopher Makoto Yogi’s August at Akiko’s, which stole with admirable shamelessness from Apichatpong Weerasethakul’s Uncle Boonmee Who Can Remember His Past Lives (taking, along with the general vibe, a cave location for its similarly spiritual finale), and I’d be very surprised if Cheung-Lau didn’t have the same reference point—a shot of a blue-lit yak in a night forest is a virtual copy of Boonmee‘s opening. Imitation is a fine starting point, but it’s important to bring something new to the table and Cheung-Lau does a few times. The moment I knew I was in good hands was their first meeting. on the trail, with Tukten on the left and Hannah at right, the camera panning back and forth between the two—an unexpected movement, but seemingly arbitrary until they part ways in those directions, with form and dramatic content synthesizing. Not everything was so original, but my pulse slowed pleasurably nonetheless—it was a pleasant waystation between more typical Sundance fare.

Sky Hopinka is one of the highest-profile emerging experimental filmmakers of the last decade; his feature debut, małni—towards the ocean, towards the shore, loosely profiles two of his friends, Sweetwater Sahme and Jordan Mercier, extending his recurring interests in new directions. Hopinka’s work contemplates indigenous Native American identity, specifically the Ho-Chunk people and the Chinuk Wawa language. Here, both Portland-residing subjects discuss their relationship to their Native identities: when they speak English, they’re subtitled in Chinuk, and when they speak Chinuk they’re subtitled in English. The results are incredibly gorgeous. As someone who’s not a Nature person and only in been in the Pacific Northwest once, I’ve never particularly gotten the appeal of life in a perpetually rainy climate, but Hopinka’s striking approach to rendering its colors got my complete attention. Red and orange foliage are rendered so brightly and beautifully that even the colors of a Shell gas station logo come out drop-dead stunning; for the first time, I really understood the appeal of living in an environment that can routinely register as benignly lysergic.

Playing firmly to my aesthetic wheelhouse, there are long sequences, beautifully kinetic (in a kind of Gerry vein) of Mercier walking through the woods, the camera following behind with almost-Steadicam smoothness, or similarly flowing phantom camera views of roads shot from the back of a moving car. Embracing longer shots than in his previous work and the challenges of maintaining rigor (and framing precision) while shooting with unpredictable elements in real time, Hopinka pulls off two long stunners: a Native dance conducted in a gym, the camera bobbing and weaving to find continually surprising faces within the organically increasing flow of people, and a final shot tracking Mercier and a friend that brings us, indeed, towards the ocean, through a rock wall, sunlight disappearing as the camera threads its way through a hole in that wall, the world plunging into artificial night before reaching the other side. I’m not qualified to comment on the film’s interrogation/affirmation of identity, but it’s the kind of purely stunning work, with heightened attention to how color works, I was in sore need of.