“My Editorial Philosophy is ‘Every Frame Matters'”: Editor Matt Friedman on Palm Springs 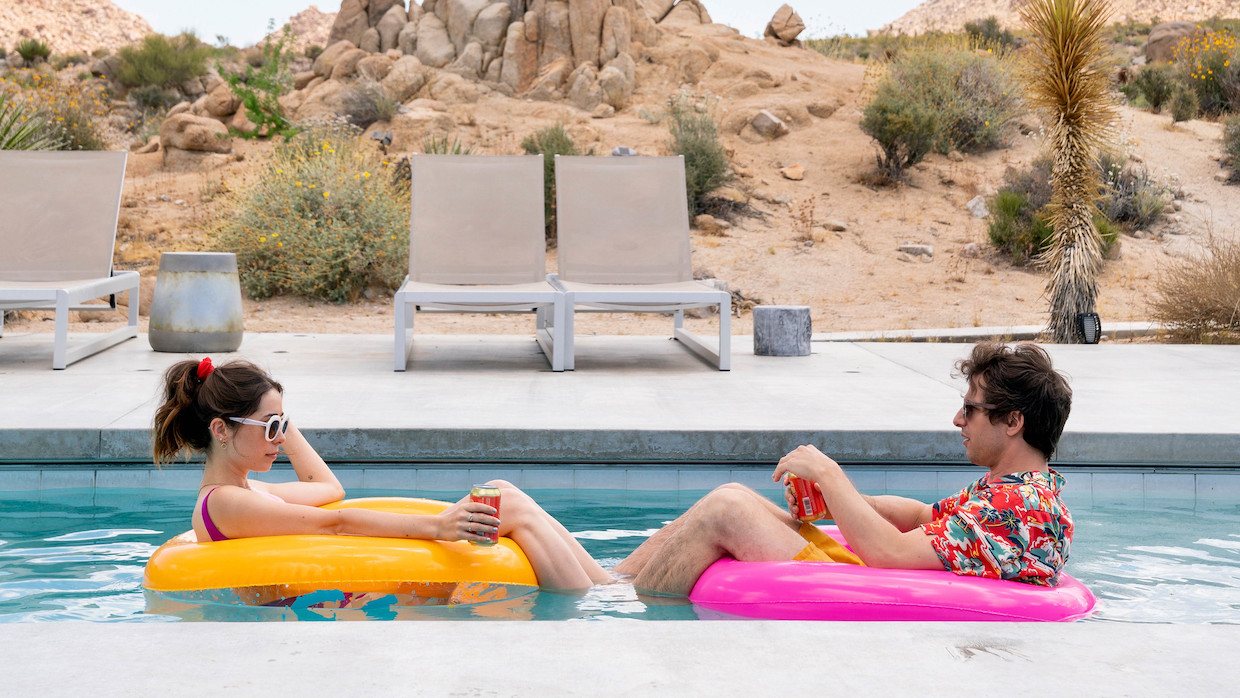 Max Barbakow’s feature debut, Palm Springs, centers around a destination wedding and a reluctant maid of honor, Sarah (Cristin Milioti), whose younger sister is the bride to be. She finds a fellow nihilist, Nyles (Andy Samberg), who is being strung along as the date of one of the bridesmaids. Their bond grows stronger as the events surrounding the wedding become increasingly more surreal. Editor Matt Friedman talks about his part in the process of making Palm Springs, from preserving the strength of the script to the necessity of VFX for small budget indie films.

Friedman: I cut another movie that one of the producers made, and he liked my work, so he introduced me to director Max Barbakow and Andy Samberg (who is also a producer on the film). We all got along great, and I loved their vision and their idea of the movie’s “voice,” so I was really excited when they brought me on board.

Friedman: My goal with every film is always the same: to tell the most compelling, funny, moving version of the director’s vision possible. It is very much a collaboration—I may challenge the director from time to time, and there is a lot of playing devil’s advocate, and invariably there is the painful process of removing things that could have been great but just didn’t work for whatever reason. There’s also the process of removing things that did in fact work and are maybe even good moments, but don’t quite fit in to the bigger story. Sometimes even really great scenes have to be removed because they just get in the way. But that’s always my very simple goal.

One of the things we all agreed on about the script was that it was smart. We definitely didn’t want to mess that up. And it was funny, but we wanted to make sure that the humor never felt forced or “gaggy,” because that would undercut the smartness of the rest of the script. Beyond that, my editorial philosophy is “every frame matters.” If there is something in the film that is not actively telling the story, I want to get it out. This might be a scene, or a single line of dialog, or even a pause between two lines of dialog. I follow that logic down to the single frame, for every frame in the movie. If I’ve done my job as an editor, there is not a single frame in the finished film that hasn’t been placed there with intention.

Friedman: It’s funny, I never knew how to answer this question until I started teaching at AFI. (Coincidentally, both Max and writer Andy Siara came through AFI as well.) I’ve been teaching there ten years now, and it’s been an amazing opportunity because it forced me to put into words why I was doing things that I had always done instinctually. One of the biggest editorial techniques I use isn’t editing at all—it’s discussion. I talk about every moment in the film with the director to make sure I’m clear on what story they are trying to tell in that specific moment. Then I work to achieve that intention. If I didn’t have those conversations, then the film would have two different voices working in slightly different directions, and the result would feel a little unfocused. I’ve taken over a number of films in the past where I replaced the first editor because they did not have those discussions. The filmmakers might not have realized that the lack of communication was the problem. They just knew that the movie wasn’t working as well as it should be. But that is almost always a contributing factor, if not the main reason.

Friedman: I started my career as an assistant editor. In fact, I was convinced to turn down a job offer editing industrial videos in DC to move to Hollywood, by a film editor named Emma Hickox, who is Anne Coates’ daughter. I interned for Emma on a film she was cutting in Atlanta and we got along great. She went on to hire me on three or four films after that. But the things she taught me as I was assisting her were foundational to who I am as an editor today. After that, I assisted Peter Teschner, who cut all of Betty Thomas’ early films. Peter would give me scenes to cut on those, and was kind enough to let me work directly with Betty on her notes. Betty saw what I could do, and when she got a small film called John Tucker Must Die, Peter was on something else so she asked me to cut it.

From there I did a handful of broad studio comedies. They were all amazingly fun to work on, but I wanted to try my hand at more character-driven dramatic stuff, so I stepped into the independent world. There was less money at stake on those films, so they were willing to risk hiring a studio comedy editor to do a genre that was outside their wheelhouse. My work on Lulu Wang’s The Farewell was exactly the result I was hoping for when I made that move. It went beyond my expectations, actually.

Friedman: I use Avid Media Composer exclusively. I tried Premiere a while back, and have cut on Final Cut in the distant past, but there are two features that Media Composer has that I simply can’t live without. First is the trim mode. When you edit with a philosophy that “every frame matters,” a trim mode that is as fluid as a potter’s wheel is absolutely essential. No one does that like Media Composer. (At least, not yet!) The other feature I can’t live without is ScriptSync. It replicates the lined script inside Media Composer. Every individual take has a line on the script though, and you can double click the intersection of any take with any line of dialog and Media Composer will instantly load that take cued to that specific line of dialog in the player window. It’s an extremely powerful tool that allows you to move at lightning speed, so you have the latitude to try crazy ideas that you otherwise might not have had the time to try. I’m always open to trying new technologies, but I need these two tools to do my job well. And helping to tell a good story is the most important thing on my plate.

Friedman: The script and performances were truly so good that there was no “hard scene to edit.” The work was very meticulous, and doing a good edit takes a lot of skill and experience, but I would not use the word “hard” to describe any of the scenes in this movie.

There was, however, a portion of the process that was hard and required some figuring out. Like most independent films, we didn’t have enough days on the mixing stage, so we had to get technically creative. I loaded the 5.1 stems of the dialog, bgs, FX, and music into Avid as six mono tracks each, and actually did some mixing directly in Avid Media Composer. The sound people figured out a way to transfer that mix metadata back into the ProTools mix session by laying it on top of their previous mix data. So, we mixed on the stage, took a break and I mixed in the Avid, then went back to the stage to do more mixing and incorporate/check/fine tune the changes I made in the Avid. I hope I never have to do that again, but we all came together to think around corners and get the movie to where it needed to be.

Friedman: You know, it always surprises people, but there are a ton more visual effects in movies like this than they realize. When you’re dealing with lower budgets films, you have to move faster when you’re shooting. You have fewer days of production than you would on the studio version of the film. That invariably results in needing “clean up” VFX. For instance, there are a lot of split screens that you never see in order to re-time performances. Dynamic speed changes to fix issues because there wasn’t time to shoot another take to get the timing just right. We had quite a bit of visual effects work in Palm Springs. Some of them you are meant to see, but for every time you see a cool visual effect in the film, there are two other times where you won’t even know the shot was an effect.