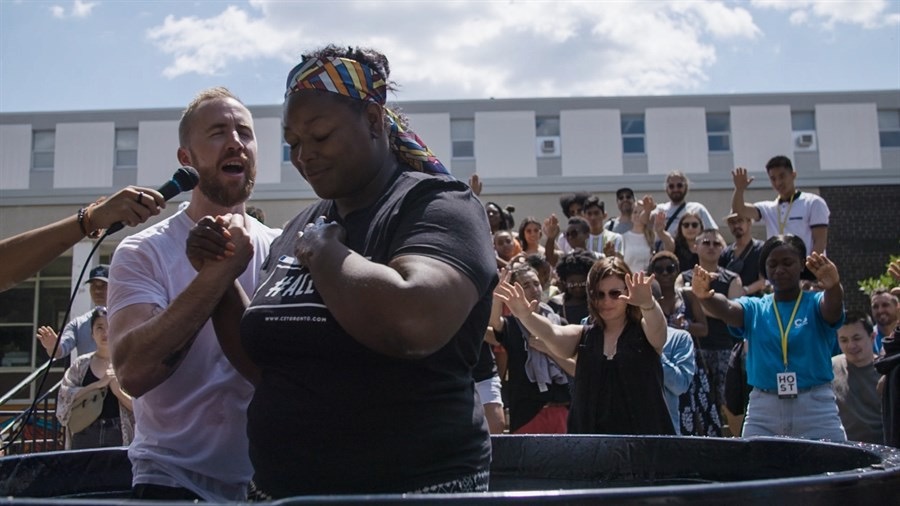 Hot Docs was one of the first of the Spring, 2020 film festivals to forge ahead through the pandemic chaos and reemerge on the online side as a more streamlined event. North America’s largest doc fest took the hybrid approach of postponing public screenings while providing a Hot Docs at Home streaming option to those social distancing in Canada. It also transferred its conference and market to the digital realm. Hot Docs also expanded its industry running dates to a whopping full month (April 30-May 31) of online accessibility, uploading everything from the “Why Art Matters in a Time of Crisis” keynote address by Kenyan filmmaker Sam Soko (director of the Sundance-premiering doc Softie), to live streamed panel discussions like “Surviving and Thriving in the Age of COVID,” to micro-meetings and “Close Up With…” sessions. Add to this the Hot Docs Hangouts (informal Zoom networking events) and a significant number of the Hot Docs 2020 official selections available for guests to stream through The Doc Shop, and one could almost forget that sheltering in place was supposed to be a trying thing.

And business did indeed get done, including hundreds of one-on-one pitch meetings during Hot Docs Deal Maker and the Distribution Rendezvous. But beyond the impressive quantity, what quality was found through these laptop connections and transactions? To find out the answer to this question and more, Filmmaker reached out to a handful of Hot Docs participating movers and shakers and doc-makers to give us the clear-eyed scoop. (Read Part Two, “The Decision Makers,” here.)

Asia Dér and Sári Haragonics, co-directors of Her Mothers (which follows a lesbian couple as they struggle to adopt a Roma child in Viktor Orbán’s increasingly anti-immigrant, homophobic Hungary); Liz Marshall, director of Meat the Future (about the “clean meat” revolution and the Berkeley startup hoping to save the planet by growing meat from animal cells); Ali Weinstein, director of #BLESSED (about the evangelical millennial-focused church C3) and producer of There’s No Place Like This Place, Anyplace (which explores the impact of luxury apartments replacing an iconic discount store in one gentrifying Toronto neighborhood).

Filmmaker: So what are the top pros and cons of participating in industry meetings online?

Weinstein: While it’s been disappointing overall not to have in-person meetings, I’ve actually been finding that the meetings I’m having with distributors and sales agents over Zoom (as part of the Distribution Rendezvous) have been better than at the IRL festival!

Normally we’d be crammed into one big room full of people trying to talk over the noise. It always feels like a high-pressure, speed dating event. But over Zoom I’m finding that everyone has been relaxed and talkative, and I’m learning more about each distributors’ work than ever before. Of course we’re still missing the fun of meeting and then seeing each other at a movie or a party later and getting to bond more over a drink. But I’d say that the Zoom meetings have been the one surprising perk of the online festival, at least for me.

Marshall: The industry side of the Hot Docs Film Festival has been efficient and well catered, specifically the Distribution Rendezvous, the one-on-one meetings via Zoom with various international distributors who expressed interest in my film. It’s been glitch-free, so to speak. The downside, though, is releasing a film right now without the experience of human-to-human interaction. Whether it is introducing your film to audiences or participating in Q&As, I miss the visceral, emotional immediacy of being with colleagues and audiences during this hard-earned phase of a film’s life.

Filmmaker: What is the biggest change(s) you would make to ensure the most productive virtual experience in the future? (Or is this even the future?)

Dér and Haragonics: As this is our first feature we were very inexperienced about what comes after the film is finished. What we learned is that it is not enough to make the best film possible — you need a very creative and strong team around the film to enable a good afterlife. And that’s even more true for these pandemic times, when the online noise is very strong. It’s a tsunami of online screenings, masterclasses and free yoga classes all around you! This needs to be addressed. While the importance of an online presence is greater than ever, it’s also harder than ever to stand out, to even get that chance to reach an audience.

Weinstein: It is hard to imagine a world in which festivals are back to normal in a year with packed cinemas, so it does feel like virtual festivals may be a thing for a while. I think that with so much of the world happening online right now, it can be hard to figure out how to distinguish yourself from the clutter of everything that just moved to Zoom.

Also, I’ve noticed that the public seemed confused about when Hot Docs was happening because the industry side occurred prior to the public-facing side, and everything now is online for the first time. So if we’re embarking on a year of everything going online, I feel like one of the things festivals have to think about — even more than before — is communication and design to get their message across to the public (and industry for that matter) about how things are being done differently now.

Marshall: The future is unknown, but we will gather in-person again for screenings, Q&As, panels and receptions. Nothing compares to sharing one’s work with a real breathing, packed room of curious minds and hearts. This pandemic-style virtual rollout of films is imaginative — using reliable tools to cater an experience for audiences. It’s still too early to know what model is most effective, but no matter what, technology is saving us all through this experience.

I am in awe of how adaptive and resourceful we are. Of course I also long for what is missing. Indicators suggest though that the convenience and normality of long distance travel will never be the same. For example, from 2013-2015 I traveled the world with my documentary The Ghosts In Our Machine. When I think of what the release trajectory will look like for Meat the Future it will be mostly virtual, I assume, with some in-person engagements along the way.

Filmmaker: Has the pandemic changed your thoughts on any future productions?

Dér and Haragonics: There are many articles about VOD platforms getting stronger, while the effect of festivals gets weaker these days. We definitely have to keep this in mind when planning our next film’s distribution strategies — especially in Hungary where VOD is more or less the only platform documentaries can live on.

While there are lots of benefits to this phenomenon, because you can find and reach your audience easier, our hearts still bleed for the big screen. Cinemas can give a unique experience to the audience. It is still so magical, so we don’t want to give up the hope that our films will have a theatrical release in the future as well.

Marshall: Yes, the projects I have in development are being shaped by this new world. I’ve been conceiving and thinking through the nuts and bolts of production methodology and new concepts that reflect the reality of COVID, of social distancing, and of all of its ramifications. It is shaping a new consciousness and perspective.

Filmmaker: Any further thoughts on the overall Hot Docs digital edition itself?

Weinstein: I’ve had mixed feelings about taking part in an online festival, and I think for each individual film there are pros and cons to premiering your film that way. But I’m really happy that Hot Docs decided to go online to allow the films to get out there. Hot Docs has such an amazing reputation in the city, and there are so many people from all different walks of life who come together to stand in rush lines in the rain and watch films together. It’s a really communal experience.

I think it will be interesting to see how many people engage in the online version of the public-facing festival. I’m optimistic that people will buy tickets and want to see what was selected this year from their homes, but we all know it won’t be the same. For one of the films I worked on at Hot Docs this year (There’s No Place Like This Place, Anyplace), we’re going to try to arrange a Zoom panel and Q&A independent of the festival. Having a community conversation was one of the things we were most looking forward to, and we wouldn’t want to lose the opportunity to do that.

Marshall: I’m just so grateful and happy to be part of it. And since Meat the Future is a Special Presentation film I also hope those in Ontario will check it out.

Dér and Haragonics: We are constantly in conversation with colleagues who are in the same shoes as us with these very different premieres. What makes us as filmmakers really sad is that there is no connection and feedback with a theater audience. And it seems to us that Hot Docs understands this need very well.

We did have a fun online Q&A with Shane Smith, Hot Docs Director of Programming. Also, one bright side of this online edition is that our two subjects from the film were able to join in the conversation – which is something we otherwise couldn’t have done at the premiere because we wouldn’t have been able to afford to bring them to Toronto. That conversation was a really beautiful experience.