“Muslim American Stories Can be Messy, Complicated and Beautiful All at the Same Time”: Zeshawn Ali on his Hot Docs Debut Two Gods 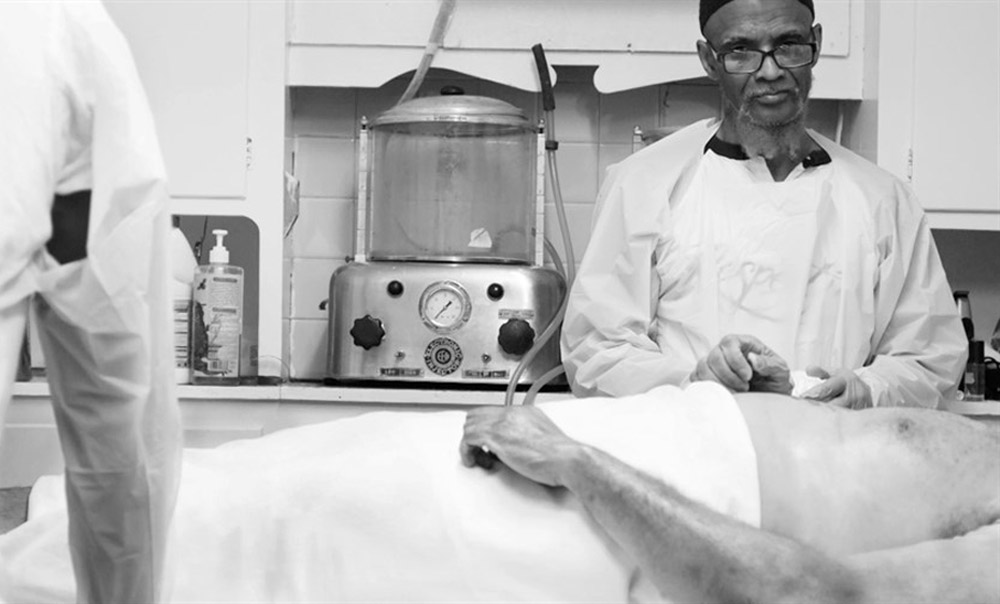 by Lauren Wissot
in Directors, Interviews
on May 28, 2020

Making its world premiere at this year’s virtual Hot Docs on May 28 and running through June 6, Two Gods (which had also been selected for the canceled Full Frame fest) follows one unlikely trio. Hanif is a devout Muslim, and an African-American man fully committed to his work as a casket maker and ritual body washer in his Newark, New Jersey community. He’s also unwaveringly dedicated to the two neighborhood kids he’s taken under his wing, 12-year-old Furquan and 17-year-old Naz, the former dealing with an unsafe home life, the latter with unsafe streets. But as the story unfolds — in sumptuous black and white images — several startling questions emerge. Is it the mentor saving his protégés or vice-versa? And what happens when, inevitably, a precarious three-legged stool comes apart?

To learn more about this auspicious debut Filmmaker turned to the doc’s first-time feature director Zeshawn Ali, who along with his brother Aman, the film’s producer, has crafted a poetic meditation on life, death and the struggle to survive in between.

Filmmaker: So how did you first encounter Hanif (and Naz and Furquan, the two kids he mentors)?

Ali: We were first introduced to Rashad, the owner of the casket shop, and had started filming at the casket shop thinking we’d make a short film on the work that was done there. Rashad then invited us to a washing. It was there that we met Hanif and learned about his experiences, and what drew him to washing and casket building. Hanif also worked at the casket shop with Rashad, so the transition to filming with him was fairly seamless.

All of the introductions came really naturally the more we spent time with Hanif. One of the first days we were filming with Hanif in the casket shop, Furquan, who lived down the street at the time, poked his head in and began helping Hanif build a casket, which is actually the scene you see in the film of Furquan building a casket for the first time. We first met Naz during the scene in the film where Hanif and Furquan go to a cookout. We were really drawn to how open he was, especially for a kid his age (he was 16 at the time).

Filmmaker: Though this is your first feature your producer and brother Aman is fairly well known, particularly for having co-created the social media hit 30 Mosques in 30 Days. Did this help with securing financing?

Ali: I think it certainly showed that there was a history of making creative work portraying nuanced stories of Muslim Americans that really resonated with an audience. And it showed that the audience was willing to engage in a meaningful dialogue around that work.

For a first-time filmmaker a big variable is often, can you make something that will impact audiences? My brother’s past work with the 30 Mosques series definitely spoke to that, so I think it appealed to funders (especially in the early stages of development). Once we secured the first couple of grants and received the first institutional support on the documentary side, we were able to build momentum to get the rest of our funding.

Filmmaker: You note in your director’s statement that “Two Gods explores the juxtaposition of grief and the rituals of death with the vibrancy of coming of age. The film is a tonal balance between those two worlds, and our choice to shoot in black and white was to show how they’re so delicately interconnected.” So can you discuss this aspect of the cinematography — and the thinking behind it — a bit more?

Ali: The goal of this film visually was always to showcase the intimacy of those two spaces: grief and coming of age. What the black and white does is allow the intimacy to feel grounded in the human experiences of our characters. When there’s no color you’re left with the textural details of the world that carry a weight: the drops of water on a windshield, a hand bathing someone during the ritual washing, the sawdust flying from the wood of a casket. I think those moments take on all of these intertwined meanings when you’re exploring themes of faith, redemption, loss, and coming of age. The way the film was shot, and the use of black and white, were all a part of that goal of making something that enhanced the intimacy of the viewing experience.

Filmmaker: One of your characters discloses domestic abuse at home, which made me wonder how you dealt with that revelation. I assume that you have to stop being an observer at that point and insert yourself more fully into the story.

Ali: That was one of the hardest moments during the filming process. A lot of times there are these unspoken “rules” when it comes to making a documentary film, and always needing to be only an observer or a fly on the wall. But when something like that happens you just throw all of that out the window. You need to make sure this person is okay, especially when that person is a child. After a certain point you have to put the camera down and just be present for this kid you have grown to care so much about. I think in terms of how we ultimately portrayed it in the film, it was important that it was told through an empathetic lens. We just wanted to ensure it was told in a way that was respectful, compassionate and honest.

Filmmaker: I read that you lost both your father and grandmother during the making of this doc, which must have been incredibly overwhelming. So how did these major life changes — both for you and your producer, of course — affect the film and/or the filmmaking process itself?

Ali: Over the course of making this film we spent so much time with Hanif at the casket shop and at washings, so we were constantly surrounded by death. But to suddenly be confronted by it on such a personal level was so surreal and difficult. We lost our father right in the middle of making this film, and then a few months later we lost our grandmother. We went from filming washings and funerals to needing to wash and bury two of the most important people in our lives.

When you encounter unexpected grief like that it feels like your life falls apart in that moment. You have to then delicately piece it back together again. But when you do, you’re able to carry this newfound perspective and meaning to the way you live your life going forwards. That perspective not only allowed me to connect with the film and our subjects on a deeper level, but that journey of navigating loss became this unspoken thread in the editorial process — this need to give space to breathe, to linger, and drift in and out of focus. Grief is something that carries you through moments until you find clarity — through faith, through connections with the people around you, and through the things you carry from the person you’ve lost.

Filmmaker: So what were some of the influences behind the film? And what types of Muslim American portrayals were you consciously and firmly avoiding?

Ali: Visually, I was definitely inspired by a lot of black and white photography: Carrie Mae Weems, Danny Lyon and Gordon Parks, just to name a few. I was also inspired by documentary films like Bombay Beach and Hale County This Morning, This Evening — films that feel lyrical and poetic.

I think I’m largely inspired by work that explores the softness of human nature — the layers that make us vulnerable and complicated. I think that also plays into a lot of the goals with this film, in terms of the type of Muslim American story we wanted to tell — and what we wanted to avoid. The Muslim American narrative has been so fixed through a political lens. We wanted to avoid telling a story that had anything to do with the headlines or politics. We instead wanted to make a film that explored the messiness of life, and the beauty of humans who just happened to be Muslim.

It was also important that the story was told through an artistic lens. Our narratives, especially within the documentary space, have lacked nuance and artistry. The tools that we’re using — the cinematography, music and sound — are all ways to push the expectations of what we think of when we think of a “Muslim film.” I think in particular it was important to tell a Muslim American story that wasn’t rooted in an immigrant narrative, and one that was intersectional. This allowed us to touch upon the important themes of race and class in addition to faith. Religion doesn’t exist in a vacuum, and the multiple identities we may hold – and the obstacles we may face as a result – is what defines our journey with our faith. We hope this film shows that Muslim American stories can be messy, complicated and beautiful all at the same time.