“This Movie is a Cry for Help from the Members of Congress to the American People”: Daniel DiMauro and Morgan Pehme on Their HBO doc The Swamp 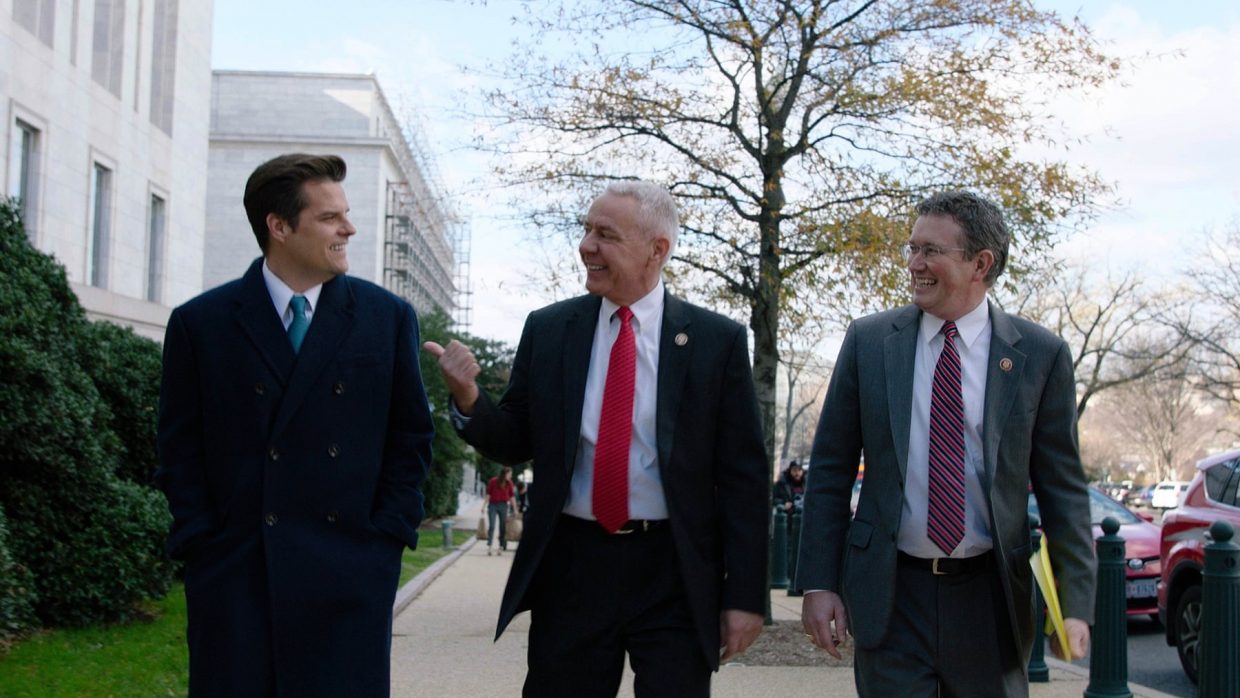 by Lauren Wissot
in Directors, Interviews
on Aug 4, 2020

To call HBO’s The Swamp a thrilling character-based portrait of three conservative white guys might seem oxymoronic, but in the capable hands and open minds of co-directors Daniel DiMauro and Morgan Pehme (Get Me Roger Stone) it’s a completely apt description. The doc is an unexpected, up-close look at the daily D.C. lives of a trio of House members who few subscribers to HBO would ever conceive of voting for: far right-wingers Matt Gaetz (R-FL 1st District), Thomas Massie (R-KY 4th District), and Ken Buck (R-CO 4th District). In other words, it’s exactly the caricature-busting film that progressives (like myself) really need to see.

With startling access, the filmmakers follow along as these Republican rebels fight — and usually fail — to “drain the swamp” through mundane bipartisan legislation that never makes the 24/7 news cycle but should. Gaetz and leftie Ro Khanna teaming up? Massie and liberal Barbara Lee? Yup, it happened while we were all trapped in the Trump twitter feed. DiMauro and Pehme are flies on the restaurant wall when Gaetz sits down with his friend Katie Hill — who he later defended in a tweet as her own Democratic leadership forced her to resign from the House in scandal — for advice on whether to forgo PAC money. The duo even capture pro-coal Massie charging his electric car! And all this as the Fox News heroes try to keep their heads above water in a “swamp” that includes “whoring” for dollars, performing impeachment outrage for the cameras (i.e., for Trump), and worrying that the slightest bucking of the MAGA line will result in a president-ordered primary challenge.

To break the system or fix the broken system? That has long been the question. To shine some light on this infuriating paradox and more, Filmmaker reached out to the patient co-directors prior to the doc’s August 4th debut on HBO.

Filmmaker: So how did this doc come about? Did you approach HBO or vice versa?

DiMauro and Pehme: Our producer Matt Whitworth found a few conservative Republican members of Congress who were open to letting cameras into their D.C. offices so that the American people could see for themselves how dysfunctional and corrupt our system really is. To be frank, we didn’t think they’d really go through with participating in our documentary because they had a lot more to lose by blowing the whistle on Congress’s dirty secrets than they had to gain from the exposure — which, in itself, posed potential dangers to their careers because they couldn’t control what we captured on film.

But, to the members’ credit, they took the risk. And from the very first day we filmed with them, we felt strongly that we were on to something that would be valuable for Americans to watch. We heard members of Congress speaking with a candor you never hear from them on cable news. It was like our camera was a confessional and the members were eager to get off their chests all of the indignities that the corruption of the system subjects them to on a daily basis. Fortunately for us, when we showed HBO that early footage they were onboard to make the film.

Filmmaker: Neither of you are strangers to how our political system really works (or doesn’t), having co-directed 2017’s Get Me Roger Stone, not to mention the Slumlord Millionaire episode of Gibney’s Dirty Money series. So how do your — I’m guessing politically liberal-leaning — backgrounds help or hurt when gaining access to subjects?

DiMauro and Pehme: We think the positive response that Get Me Roger Stone received from viewers and critics across the political spectrum gave us a great deal of credibility to make the case to the members that, despite our very different worldview from theirs, we would be fair in our portrayal of them.

Our desire as documentarians is not to preach to the choir but to make films that people with different perspectives from our own will be willing to engage with — and, hopefully, open their minds to considering the merits of what we’re trying to convey. Yes, we’re liberals, but we don’t have a partisan agenda we’re trying to perpetrate. We believe that our responsibility is to defend the principles of good governance, to call out corruption regardless of which party is behind it, and to fight for our government to justly and equitably serve the interests of the American people, not the moneyed special interests that have perverted our system for their benefit.

Filmmaker: How did you choose your characters? Were there folks you reached out to who declined to participate?

DiMauro and Pehme: Every journalist who has ever covered politics knows that the candid discussions you have with elected officials off-the-record are worlds apart from how they speak when they know they’re being recorded.

For our characters we sought out members of Congress who would be willing to speak on camera pretty much the same as they do in private. We were also looking for whistleblowers who would expose the practices everybody who works in Washington knows are corrupt, but that nobody talks about in public — either because they’re afraid of the consequences to their careers or because they’ve just come to accept them as the way things work.

There were many other members we interviewed for this film who didn’t make the final cut, and mostly that was because they insisted on regurgitating a bunch of spin we knew for a fact wasn’t true. The American people hear enough of that bullshit. We figured we’d spare them having to endure more of it watching our film.

Filmmaker: How did you negotiate boundaries with your subjects? Matt Gaetz, who pretty much exists on social media, seems to have provided almost unlimited access, whereas Ken Buck, the oldest of your three protagonists, appears much more calculated in front of the lens.

DiMauro and Pehme: We never agree to pre-conditions with our interview subjects. Either you’re willing to participate in the film on our terms or you’re not in it. It’s that simple.

Of course, when it comes to following subjects in the cinéma vérité style we employ throughout this film, how intimately our subjects let you into their lives, and the degree to which they invite you behind closed doors, [that] is up to them. Over the year-plus we filmed with our subjects, we worked hard to develop our relationships with them so they would allow us increasingly greater access. We feel the final film reflects how deeply we were able to burrow into their experience.

Filmmaker: Thomas Massie, the Republican from Kentucky, provides some of the most surprising scenes in the film. It’s still hard for me to wrap my head around the notion of a pro-coal, climate-change skeptic who drives an electric car and lives on a solar-powered farm. So what most upended your own preconceived notions?

DiMauro and Pehme: We hope that this entire movie upends people’s preconceived notions about the way Congress functions and the battle lines drawn between the parties. From the outset of our filming we were surprised to find out that all three of the Republican members we were following were adamant about bringing an end to the perpetual wars that have done so much damage to America and the world since 2001. We’d assumed that the warmongering ways of George W. Bush and Dick Cheney were still orthodoxy among conservatives, but we watched our members actually putting on the line their political capital (and with Massie, his career) to build coalitions to try to bring the wars to an end. This despite the intense blowback from hawks like Liz Cheney, the third highest-ranking Republican in the House of Representatives, who also happens to be Dick’s daughter.

But what surprised us above all is how frustrated members on both sides of the aisle are by the stranglehold that big donors, lobbyists, and special interests have on Congress — and how this fundamentally corrupt system incapacitates the institution’s ability to function as it was intended by the Founders in the Constitution. We’re so used to Democrats pointing the finger at Republicans, and vice versa, to blame the other party for why our country is so screwed up. But when you talk candidly with rank-and-file members they don’t grouse above all about partisanship — they lament their powerlessness. In a lot of ways, this movie is a cry for help from the members of Congress to the American people. They’re asking us to use the power of our voices and our vote to break down a system that’s been so corrupted by money at every turn that there’s no way out of the labyrinth from the inside.

Filmmaker: So what’s been the reaction from your protagonists — and DC insiders in general — to the film so far? Are you preparing for a backlash now that the doc is airing nationwide?

DiMauro and Pehme: We won’t speculate about what people’s reaction will be, but we have been glad to hear that people are buzzing about our film in the halls of Congress, and that a number of powerful individuals seem to be bracing for its impact.

We intended for this film to challenge the leadership of both parties and the status quo they protect. That’s because we so strongly believe in our film’s fundamental message: if we don’t root out the corruption that has infested Congress, it will never be able to take the bold steps necessary to tackle the many, massive, urgent challenges facing our nation, no matter which party is in the majority. We really hope The Swamp is a call to action for all Americans — Democrats, Republicans, and independents alike — to band together to drain it, because we are running out of time to do so.