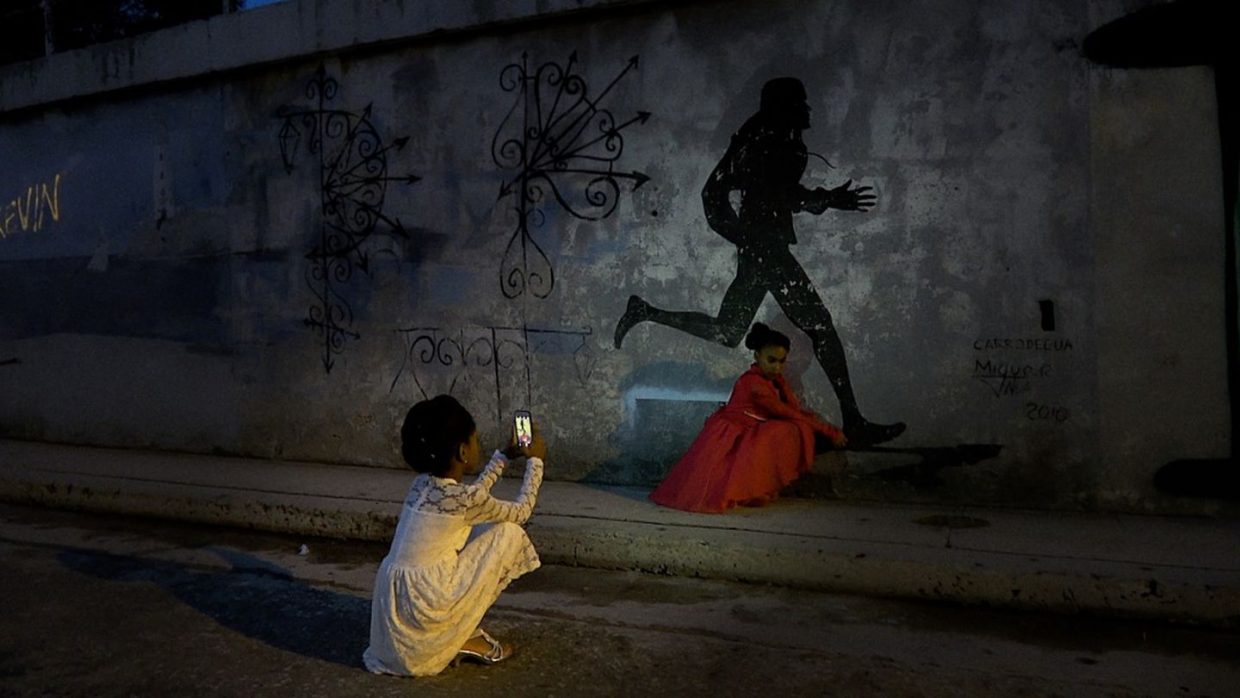 by Lauren Wissot
in Directors, Interviews
on Aug 28, 2020

“What kind of future does tourism portend?” wonders a Cuban character rhetorically in Epicentro, the latest work of cinematic nonfiction from Oscar-nominated filmmaker Hubert Sauper (Darwin’s Nightmare, We Come as Friends). “None! It is only devouring the future,” the Havana man declares. Indeed, it devours the “past and the culture,” rendering everything “superficial.” But then comes the real multimillion-dollar question, “How much does cinema resemble tourism?”

Winner of the Grand Jury Prize for World Cinema Documentary at this year’s Sundance, Epicentro — an allusion to the northern Caribbean island’s place at the epicenter of the Americas, both geographically and politically — is a visually intoxicating and profoundly insightful exploration/interrogation of Spanish colonialism, US imperialism, and cinema as myth-making propaganda tool. And all set against the stunning backdrop of today’s Cuba, a “paradise” of ’50s nostalgia, where American sightseers — or “human beings in their worst possible form” as one character puts it — snap photos of kiddie locals as if at a human zoo. (No wonder so many indigenous folks historically viewed photography as soul stealing.)

Just prior to the film’s August 28th virtual launch through Kino Marquee, Filmmaker caught up with Sauper — a globetrotting master of sociopolitical doc-making who was born in the Austrian Alps and raised amongst a population that had lived (and served) in Nazi Germany — to discuss his astonishingly grand take on a territorially tiny, globally significant nation.

Filmmaker: So how did this project originate? Did the desire to interrogate American imperialism, along with cinema itself, lead you to shoot in Cuba, or vice versa?

Sauper: The original idea for Epicentro was not set in Cuba, and was not even about American imperialism. It was a reflection on how we (Europeans) created a strange concept called “Utopia,” taken from a book written by Thomas More in 1516, just after Europeans “discovered” another world. This other new world was, and still is, the canvas of so many projections and fantasies. In five centuries it has transformed into countless branches of thinking, including the American Dream as well as the “ideal insular world” of the Cuban Revolution.

So it seems the exact words of Thomas More were materialized, five centuries later, in the manifesto of Fidel Castro and Che Guevara — the island of justice, peace, free of personal possessions, free of gods and emperors. Therefore very early in the research, Cuba imposed itself as my “Epicentro” for three wonderful years of my life. As so often happens, if one searches for a certain thread of questions many more doors open than one had expected.

It’s an odd idea of course to narrow down the “birth” of the USA as a world empire (by reconstructing the faked naval battles) in a bathtub in NY, and through the USA’s most powerful tool of communication, the moving image. When I “discovered” this oddity, it was one of these “wow” experiences, which I tried to translate into an Epicentro (again, a movie). Of course this is all a playful and somewhat poetic way of reflecting on history. Yet it is “real” history — as real as the very technical, statistical, and “factually true” interpretations of academics.

The USS Maine in reality exploded in the dark, with very few witnesses. Most of them died there and then. But the fake explosion in a bathtub was, and still is, the “reality” of millions of Americans witnessing it on a flickering screen. Events are in retrospect “real” once they are in a collective memory. Cinema is maybe the most history-changing and history-making invention ever.

And cinema is prophecy — it creates truth. Just an example that I highlighted a little bit in Epicentro: The Apollo 11 mission to the moon happened in 1969. But it was imagined and “realized” in a film in 1902 by the great “realisateur de cinema francais,” Georges Méliès. Just look at all the images in a row. In Voyage to the Moon, Méliès shoots the “projectile” into the sky, the spaceship lands on the moon, the scientists open the gate, they make their first step on the moon, and then watch the earth rise. The explorers eventually fly back to the world and land, with the help of a parachute, in the ocean. Even the big parade to celebrate the brave men from space was all pre-envisioned. Sixty-six years later all this imagery reappeared in blueprint, but this time for real, done by NASA. Both Thomas More and Méliès, and anyone who writes or makes images, is “creating future.”

Filmmaker: There’s a wonderful quote you gave in the press notes: “As a nonfiction filmmaker, my task is not to ‘show reality as it is.’ That makes no sense, it does not exist. I create a world – a movie – which consists of real people in their real environment, as themselves.” So can you discuss how you went about creating that world in Havana?

Sauper: Havana is one of the most incredible energetic places on the planet, where almost any shot a camera catches is automatically amazing. It is lively, it is young. It is old decadent Europe and Africa. It is revolutionary and communist fantasy, and also fits the “Make America Great Again” bullshit. Havana is a strange window onto the past but also onto the future. All at once.

Of course this beautiful city is falling prey to a million tourists who want to catch just that. Old American cars and young Caribbean ladies are a “cocktail” that makes, with a shot of rum, some elderly US citizens often fall into a state of trance.

Filmmaker: In addition to being an Oscar-nominated filmmaker you’ve also been a visiting professor at over a dozen universities around the globe. So besides earning money, why teach? Does it allow you to find international subjects for your films? Shape future documentarians?

Sauper: To be honest, teaching is not a lucrative activity, and even less so is making “films d’auteur” like I do. It is important as an “auteur” to figure out one’s own brain, at least somehow, and teaching and communicating to young intellectuals or filmmakers is a great exercise for one’s own work. Just like sitting in a French train and answering these questions! You oblige me to somehow get loose thoughts a bit more organized so they can be shared. And, yes, every thought shapes the following one. And the next. And therefore all the rest of life as it seems.

Filmmaker: How did the idea of incorporating both The Great Dictator and Oona Chaplin into the film come about? The movie-watching scene at the end with her and the children is so incredibly powerful.

Sauper: Cinema is much more an experience, a life experience, than it is a discourse. We see The Great Dictator through the eyes of the children who, at this point in the film, we have gotten to know and love. We “experience the experience,” which is doubly powerful. At the time of the screening I sat with my camera under the screen and filmed the other way. I wanted to watch Oona looking at her amazing grandfather. I watched the children looking at a comical emperor in black and white.

As for Oona, we’d known each other for awhile, but I had not planned to have her come and make Epicentro shine. But when the kids, early in the film, see Chaplin “appear” like pure magic through a fast-forward scene they filmed of themselves, I knew I had to show this to Oona. She was working in LA with James Cameron at this point. But once she saw Leonelis and Annielis in a clip I sent her on WhatsApp, that was it. Oona was in love with these brilliant kids even before having met them. It was really a “lucky strike.” I’m so grateful to her for having given all her beauty, talent and intelligence. The times with “my kids” and Oona in Havana were an out-of-this-world experience, which I tried to translate into flickering images.

Filmmaker: You premiered this film at Sundance, where it won the Grand Jury Prize for World Cinema Documentary, which made me wonder how the movie was received by the general public. As someone who has long explored the violent consequences of imperialism, do you find a stark difference in how audiences respond to your films depending on whether the viewers are members of a colonized country or one that’s historically been the colonizer?

Sauper: Epicentro was still “young.” At Sundance it was cheered by crowds of educated and cinephile audiences. And as the film is somewhat “about” America’s imperial soul and auto-narrative, it resonated with the viewers even more.

I was glad nobody had the sense of being “taught a lesson” by a non-American. A film of this sort is an exchange of questions. So it is a great pleasure to see how my films are read in an intelligent, complex way, and that it is very much understood as a piece of art, too. Even though “art” to some people in North America is an elitist, somewhat arrogant term when it comes to movies.

Just last week Epicentro opened in France, in real cinemas on big screens — in 80 cinemas! The press is great and very much so the reactions of audiences. Yet most Europeans have never heard “Remember the Maine” before and know relatively little about when and how and why the USA became the world empire it is today.

So the European audiences see other things. Just as each one of us sees her or his own film anyway. I also premiered Epicentro in Havana, with my “young prophets” in the first row (screaming with joy to see themselves “bigger than life”). It was a celebration without comparison.

This morning I got a text message from a writer friend, Caroline Lamarche. She reminded me of something I had not rationally incorporated into thoughts about my own film. She said that the scenes of the tourists “plowing into old Havana” with their big photo cameras reminded her of the “human zoos” in Europe, in which the Congolese were “displayed” in London and Brussels and Paris to be seen by the public. It’s a terrifying and very accurate observation. These human zoos were, by the way, invented during the exact period of time when the USS Maine blew up. And it was also the time when Europe “shared the cake of Africa.” These were dark days on our planet — which finally led in 1914 to the first of the ugly big wars.