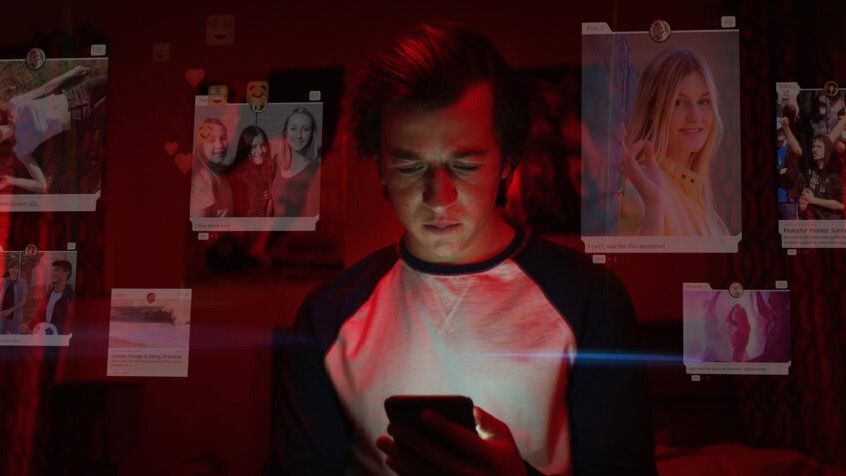 by Lauren Wissot
in Directors, Interviews
on Sep 9, 2020

From Arab Spring uprisings to Russian disinformation campaigns, social media platforms have swung from heralded saviors to all-purpose bogeymen with breakneck speed. So how did we get here? And can online life even be fixed? Was it all the inevitable result of a worldwide collective bargain with the Big Tech devil? (Nothing in life is free, and that goes double in Silicon Valley.)

With Jeff Orlowski’s The Social Dilemma, which premiered at Sundance — as did the director’s 2017 doc Chasing Coral and 2012’s Chasing Ice — these consequential questions and more get addressed through a most unusual format. The film showcases straightforward interviews with deep tech thinkers, such as professor and author Shoshana Zuboff, and scientist/musician/writer Jaron Lanier (who coined the term virtual reality) — as well as with the insider resistance. Most notably featured are former Google design ethicist Tristan Harris, Facebook “Like” button co-creator Justin Rosenstein, and former Facebook Director of Monetization Tim Kendall (just three of the small coterie of elite white guys responsible for the algorithms that run — ruin? — our daily lives).

And then there’s the fictional drama threaded through, scenes starring a tech-addicted nuclear family whose every move is predetermined, Truman Show-like, by a trio of geeky puppet masters on the other side of their screens. (Which proves an unexpectedly powerful filmmaking choice. I now hear notification pings and immediately visualize a desperate Trekkie whining for attention. Go back to the ComicCon you came from, smartphone man!)

A few days before The Social Dilemma’s September 9th Netflix release, Filmmaker reached out to Orlowski to find out about the project, including weaving a narrative into a doc, and how human experience is the new fossil fuel.

Filmmaker: This doc originated with a chat you had a few years back with a college friend in Silicon Valley. That friend happens to be Tristan Harris, a former design ethicist at Google and now the president and co-founder of the Center for Humane Technology, who is featured prominently in the film. So what convinced you that you could ultimately turn a series of conversations into cinematic form?

Orlowski: To be honest, we weren’t sure for awhile. Based on the conversations with Tristan, we knew this was a huge and underreported issue, and that he and his team had a very unique perspective that I hadn’t heard before.

We started doing a lot more research and talked to more insiders from within Silicon Valley. We became convinced that there was something to be made. We started lining up interviews with some key experts and just had faith that this was an important story and that we could turn it into something.

Filmmaker: How did you choose which experts to include, though? Are there folks you interviewed who ended up on the cutting room floor — or anyone you reached out to who declined to participate?

Orlowski: We really focused on finding as many people from within the industry as possible. People who had worked at Google, Facebook, Twitter, YouTube and elsewhere, and who had left the companies. They were more comfortable speaking out and voicing the criticisms that we weren’t hearing from any employees, nor from the companies’ PR representatives.

We thought that the people who designed the code or built the business model were some of the most credible authorities we could have to speak to the consequences. There were many others that we reached out too as well, some of whom did anonymous interviews, and others that we unfortunately couldn’t fit into the film.

Filmmaker: The film is unusually structured, to say the least. In addition to straightforward interviews, you have this parallel storyline of a fictional family navigating tech addiction. And layered on top of that you’ve got the Truman Show element with the three guys in the algorithm control room who are determining the son character’s behavior. So how did you come up with this tricky concept? Were you always sure you’d be able to pull it off?

Orlowski: Ha! No, I don’t think we were sure until the film was done! After speaking with all the experts we started to envision a way to bring the algorithms to life. We often referenced Inside Out, and wanted to do that for the phone.

We had this concept, and it was a huge challenge to get the narrative story to interweave with the documentary story. And as we kept filming more interviews and editing the doc, it changed the structure that the narrative would hang on. We really wanted them to be complementary, and wanted to leverage the narrative elements to help bring to life what we were learning from the experts.

At one stage, when we had a full script for the narrative portions, we got a local artist to storyboard the whole narrative film, and we edited the boards into the documentary. Some of our post team recorded voiceover for the narrative scenes, describing what would happen. So we were able to watch a rough cut of the film, interweaving the interviews with the scripted story, and we were able to make changes to the script based on those cuts. Ultimately, we shot the narrative portions in November of 2019 and had them all in the film, along with a huge number of VFX shots, just in time for Sundance two months later.

Filmmaker: I also noticed the poster for Chasing Ice in the son’s bedroom, which made me wonder if you see a through-line tracing back to your prior films.

Orlowski: Absolutely. These films all look at the consequences of the impact that extractive industries are having on the world. An industry that at one point seemed full of optimism and opportunity, until years later, we see the devastating consequences. One is mining the planet for profit, the other is mining human experience for profit. I think it may be hard for some of my friends in the tech industry to hear this comparison to the fossil fuel industry, but that’s how I see this issue.

And in both instances we, human beings, created the problem. Which means we have the responsibility to fix it.

Filmmaker: A lot has changed since the doc premiered at Sundance — most notably we’re in the midst of a global pandemic, which has spawned a slew of coronavirus misinformation and disinformation online. So has the film itself, or your release plan, changed at all in accordance with recent catastrophic developments?

Orlowski: We were planning on making some small edits to the film after Sundance, but then Covid hit and changed our plans completely. We worked fast to get a new scene into the film to reflect the latest news and misinformation that was surfacing about the virus before we locked picture in April. We had originally planned to screen at many film festivals around the world, but as with so many films the pandemic shifted those plans.