“Make a Documentary of What’s Happening in Front of You”: DP Phedon Papamichael on Shooting Aaron Sorkin’s Courtroom Drama, The Trial of the Chicago 7 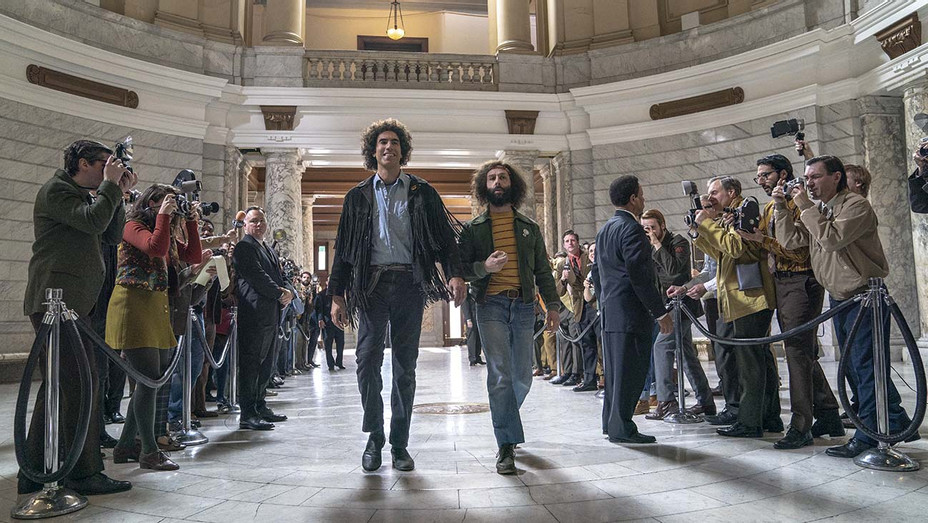 The Trial of the Chicago 7

by Daniel Eagan
in Cinematographers, Interviews
on Oct 16, 2020

Aaron Sorkin, Netflix, Phedon Papamichael, The Trial of the Chicago 7

After violence disrupted the 1968 Democratic National Convention in Chicago, eight defendants were arrested for conspiracy to incite a riot — an event dramatized in Aaron Sorkin’s new The Trial of the Chicago 7. They included the countercultural figures Abbie Hoffman (played in the film by Sasha Baron Cohen), Jerry Rubin (Jeremy Strong) and Tom Hayden (Eddie Redmayne). In The Trial of the Chicago 7, writer and director Sorkin recreates the chaos surrounding the six-month trial, mingling day-to-day testimony with flashbacks of protestors and police preparing for demonstrations in places like Grant Park. In addition to following the defendants, Sorkin explores the strategies of prosecutor Richard Schultz (Joseph Gordon-Levitt), defense attorney William Kunstler (Mark Rylance), and Judge Julius Hoffman (Frank Langella).

Cinematographer Phedon Papamichael shot most of The Trial of the Chicago 7 in Patterson, New Jersey, where the production team built a courtroom in an abandoned schoolhouse. The crew also shot in Chicago for the Grant Park demonstrations, incorporating footage from Haskell Wexler’s Medium Cool. Papamichael’s previous feature was Ford v Ferrari. He is currently producing and directing Light Falls in Greece, where he spoke with Filmmaker via Skype.

Filmmaker: You were filming Trial of the Chicago 7 during present-day demonstrations.

Papamichael: Obviously we could see the parallels when we started to film, but since then the movie’s become even more relevant. It’s crazy, especially considering that the script was written 13 years ago.

Filmmaker: When we spoke last you were wondering how to tackle a 170-page script.

Papamichael: Yeah, it’s a lot of talking. Courtroom dramas are tricky. Basically it’s a box, and everyone’s always in the same seats. People are against walls. The judge has no background really.

One of the big challenges was establishing consistent lighting in the courtroom, where about 60 percent of the story takes place. Also, the script is nonlinear. The timelines overlap, jump forward, jump back. We have these vignettes outside the courtroom, they could be only three or five seconds long. And we don’t necessarily return to the scene or spot we left. A statement will trigger a flashback, but we may not return to the same character.

I wanted to establish different moods in the courtroom, both psychologically in terms of the characters and to show the passage of time. With certain witnesses, like the undercover cop, I went moodier, like an overcast day. The opening day in court is sunnier, because the defendants are optimistic. And then for the final verdict, I play a hard beam of sun on Eddie Redmayne as Tom Hayden when he starts reading the names of Vietnam War casualties. I wanted him to glow in a sort of heroic, angelic light.

Although we were shooting in a location, I treated it like a stage. I built a huge lightbox outside the two bay windows, literally boxed in the whole thing and created lighting setups that could function as indirect light and also source light. I kept having to switch among setups because we had to block-shoot scenes.

Papamichael: No, partly because there were actor availability issues, partly because we didn’t have the budget for extras. For instance, Michael Keaton [who plays former Attorney General Ramsey Clark] was only available for one day in the courtroom. Some scenes are three or four lines, and then some are sixteen pages. I’d light for the 16 pages and then switch over into sun mode for a cop in the stand who has one line. I couldn’t turn around to finish the first scene because I didn’t have the extras. There were times when I had to shoot six or seven scenes in one direction, and then recreate the lighting later to do the reversals.

So I made up a spreadsheet for courtroom days that weren’t specifically scripted, and then assigned a lighting pattern for each day.

It was a logistical nightmare, especially because Aaron only wanted the camera on the person who’s talking. Editorial options were not a huge factor for him. When he sits at the monitor, he’ll close his eyes and just listen to the words and go, “Cut. Great. Got it, moving on.” He didn’t want to do a lot of takes because he was worried about actors starting to try things that weren’t scripted.

Filmmaker: How involved were you in blocking the scenes?

Filmmaker: But you don’t shoot it that way, you frame to reflect the dialogue. Coming in close on Mark Rylance when he makes a point, for example.

Papamichael: That’s something I developed with [James] Mangold, those little push-ins. I’m always on a slider, so I can make subtle moves. I never just move the camera. I don’t rotate around, I don’t do fancy moves that are not motivated. The timing and speed of these little push-ins or pull-outs, or a rotation where I’m on a profile and I swing around and reveal somebody else — those are my specialty.

I used anamorphic widescreen 2.40 ratio with the Alexa LF, a combo I discovered on Ford v Ferrari and liked a lot. Aaron was always asking for “long lenses,” but I prefer to be physically close with the camera. You can create an intimate close-up but still keep the surroundings alive in it.

Especially for a courtroom drama, I want more than just frontal close-ups, I always want to involve the other players. At least get a sense of them reacting. We’re typically a bit low, and to avoid making it too cutty we have “dirty” close-ups when we’re on the floor, and clean close-ups of the judge because he’s removed from everyone. I tried not to shoot flat. I always tried to rake and get angles, at least get a flag, a stenographer, get the judge with the witness, or the judge with the witness and the jury, or the prosecutor with the defendants.

Filmmaker: Early on you have a two-minute shot introducing the main figures in the courtroom.

Papamichael: The other really interesting shot is the last one. It looks like a Technocrane, it starts on Schultz as he stands while Hayden is reading the names. We pull out slowly, pan around to the sketch artists, the defendants, move to the back of the courtroom, and then we appear to crane up to end in a very wide shot.

I couldn’t fit a crane in there. Because we weren’t on a stage, I couldn’t pull the walls and ceiling. Instead we built a wooden ramp, blocked it from view early in the shot with the crowd, then cleared the crowd while my Steadicam operator is walking up the ramp backwards. A very low-tech way to get the image Aaron wanted.

Filmmaker: How did you approach the demonstration scenes in Chicago, where you’re intermingling archival footage and new material?

Papamichael: We shot the bridge crossing and the Grant Park demonstration in like three days. There were no shot designs, they weren’t shot as sequences. It was more, make it work for three seconds. Make it work for ten seconds. It’s almost like a commercial, you have to shoot it with that in mind. You can’t create some sweeping crane move because it won’t hold to the rhythm and pace of his writing.

Aaron had some key visual elements that were very crucial to him. Once we got those beats, I was always trying to get extras. It was great that we were in the original location, but I wasn’t trying to match the original footage. We shot handheld with the LF and Minis. For the riot scenes I sent my two operators into the crowd and told them, “Make a documentary of what’s happening in front of you.” I wanted to recreate that energy, but with anamorphic lenses. When we put it together, we even changed some of Haskell’s footage from Medium Cool from 16mm color to black-and-white.

Filmmaker: Did you finish postproduction before the pandemic hit?

Papamichael: I got caught in Europe, I was doing a commercial in Sweden when our kids’ school shut down. So we ended up visiting my mom in Greece. We came with a small bag, then Europe went into lockdown. School became Zoom schooling, so we figured we might as well stay. Of course we didn’t expect to stay for five months. The stores were all closed. The kids outgrew their shoes.

I was going to fly to the US, but that option went away when I couldn’t return to Europe. My colorist Skip Kimball could be the only person in the room anyway. I worked from London with Skip on Nebraska, so we started exploring similar remote strategies. I worked on Screenbox from a boutique coloring shop in Athens where I do commercials.

At that point Netflix bought it, so we were really focusing on HD. We didn’t need matching projectors. The only problem was we didn’t have exact monitors. We referenced and calibrated, but I was never in the position where I was comparing apples to apples. I saw the trailer when it came out and thought it looks good. It looks dark, the way I wanted.

Filmmaker: You shot this thinking it would be a theatrical release.

Papamichael: I always shoot for the big screen, I haven’t done anything that was just going to be streaming. Paramount was going to release this theatrically. Actually it was supposed to open the New York Film Festival. I know it’s had some limited theatrical screenings. Netflix had an order for film prints, not just DCPs, but I had no hand in that.

It might seem disappointing that there’s no broad theatrical run, but in order to get it to people before the elections, I think Netflix was probably the better platform. More people will see it.

Filmmaker: Are you comfortable going back to a set?

Papamichael: I’m currently directing and shooting a movie in Greece. We all get tested multiple times, every morning you get your temperature taken. If you check out okay you get a wrist band. It seems workable, knock on wood. I’m halfway through the movie now.

I started shooting again in September, doing commercials. In Greece we did a huge Perrier job with Cary Fukunaga directing. He brought his Bond stunt team from England, horses and horse riders from Budapest, models from Brazil, hundreds of extras. We got through it. It was hot, a lot of tight spaces, but I’m fine with it. I think it’s a risk that seems not too outrageous. With the correct procedures I think we can start making movies again.