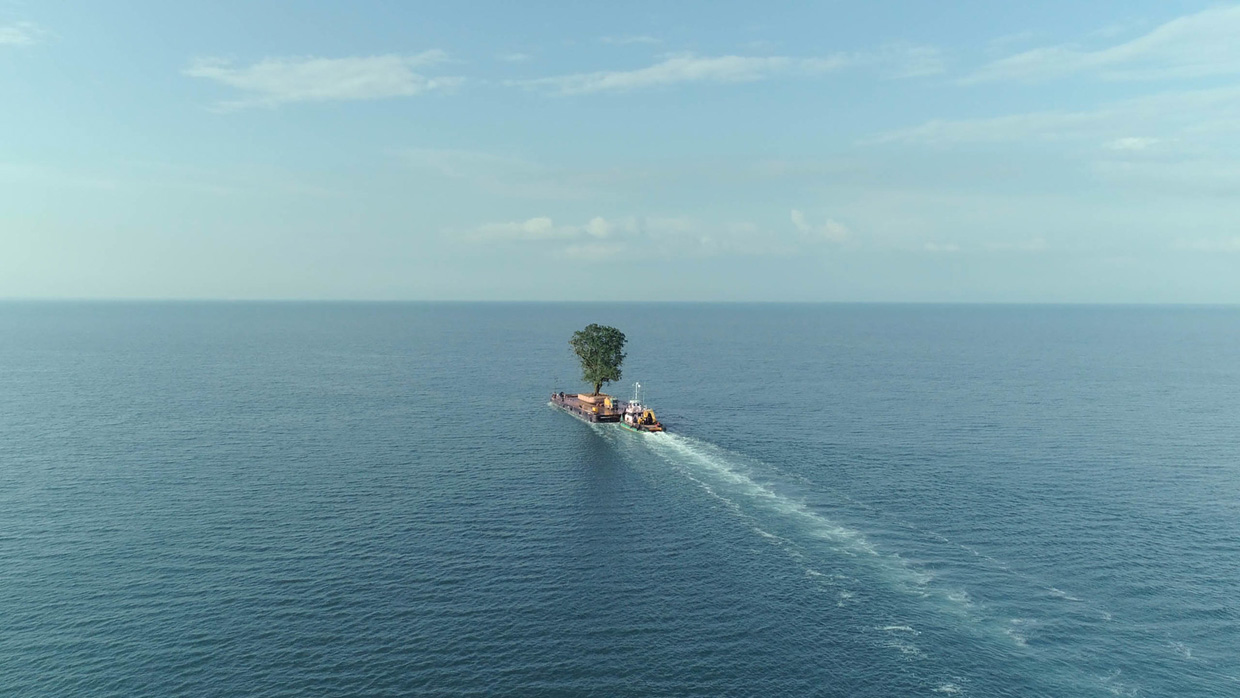 I generally strive to be a well-informed viewer; in the case of Amalia Ulman’s El Planeta, however, I was perhaps better served by going in uncharacteristically ignorant. I didn’t really know anything about Ulman besides the fact that she’s a performance/video/web-artist, so I wasn’t picking up on any of her debut feature’s connections to the personas developed on Instagram, galleries et al.. Instead, Ulman’s debut feature, shot in the town of Gijón, where she grew up, registered as exactly the type of movie I like, a droll comedy formally descended from Éric Rohmer. Rohmer’s legacy doesn’t just lie in delicately shaded characterization or incredible freshness of performance; his willingness to trade lower budgets for greater control created, out of necessity, a whole aesthetic world that doubles as very pleasing on its own. His treatment of urban landscapes is especially key: consider e.g. 1972’s Love in the Afternoon (after a lifetime of hearing it referred to as Chloe in the Afternoon, I’m still struggling to remember its finally rightly-translated title). Paris cafe interiors are enlivened by street scenes glimpsed through their massive, clear windows, a low-budget way of grounding an interior scene against an endlessly intriguing, semi-controllably spontaenous larger world. Hong Sang-soo often pulls the same trick—which is part of why Rohmer comes up so often in reference to his work—but sometimes he’ll place characters in a restaurant with a tiny or no window for the opposite, much more claustrophobic effect.

Acting opposite her own mother Ale, Amalia Ulman does it both ways in El Planeta. The stone-broke pair live in a tiny apartment, trying to treat their poverty as much like a joke as they can. Ulman (daughter) worries about her weight (“If I keep eating carbs I’ll have a poor person’s body”) while trying to get her career going; a prospective styling gig for a Christina Aguilera magazine cover will not cover the cost of international plane fare. (As her would-be commissioning editor explains: “The bigger the name, the less money is involved. It’s good exposure.” Anyone who’s struggled through a freelance hustle for years will get chills.) The plot’s episodic, mostly revolving around Ulman’s game efforts to simultaneously navigate first dates and the professional world while making sure destitution never cracks her facade in either realm. Economic tension only explicitly bubbles to the surface twice: once during a monologue Ulman’s mother delivers on the phone, which doesn’t quite land, and during a mother-daughter fight, which absolutely does.

Beyond the very lived-in central relationship, Planeta’s very funny both in dialogue and rhythms, the kind of film in which a character can wear a backpack for 10 minutes before turning their back to the camera to show what’s actually on the back, which turns out to funny both for what’s there and the rhythm of the reveal. Likewise, in the cramped mother-daughter apartment, pleasure’s equally derived from the banter and the Hong-esque way the camera deftly pans down and back up for tiny moments of emphasis within a master shot—spatial navigations no less elegant for their impoverished necessity. And the film is, in its modest way, quite lovely to look at, in nicely graded black-and-white. In the press kit, Ulman explains that “we had a very tight budget, but I still wanted to make a beautiful picture. Light conditions aren’t very good in Gijón and shooting in color would have been both challenging and expensive.” That reasoning places her work alongside Philippe Garrel, who’s noted that shooting color is twice as expensive, requiring makeup, colorful set dressing et al.—even more good company to be in. I’d be (very pleasantly!) surprised if I saw a better film during this year’s Sundance.

The title of Luzzu, Alex Camilleri’s feature directorial debut, may initially be confusing but that’s cleared up very fast: A “luzzu” is a traditional Maltese fishing vessel, a fact quickly divined by the number of times the title is said. (I wanted to turn, Film Twitter style, to a viewing companion, point and say “That’s the luzzu” each and every time, but nobody was around.) This particular luzzu belongs to Jesmark (Jesmark Scicluna), who inherited it from his father, which is also immediately established in the opening dialogue between Jesmark and his cousin/fishing partner David (David Scicluna). “Your dad used to break his back on this luzzu,” David says. “I know,” Jesmark surlily responds—and now so do we, the audience. This luzzu needs to have one of its pieces replaced to be seaworthy again—the cultural inheritance Jesmark received is sinking, just like the traditional Maltese fishing trade, decimated by changing EU regulations. Luzzu trades in similarly torturous metaphors throughout, like this response when Jesmark tells a colleague he’s never left Malta: “A fish stays in the bowl, never grows.”

Jesmark and wife Michela (Michela Farrugia) have an infant who isn’t growing fast enough—they need to come up with thousands of Euros for his care, and the artisanal fishing Jesmark’s doing isn’t an economically viable path. Tensions between husband and wife prompt Jesmark to compromise his principles to work for a fish trader dealing in off-season goods, who bribes politicians with boxes of freshly-packed catch. At various moments, Luzzu briefly seems like it might turn into a commercial fishing thriller about esoteric forms of seafood fraud. Hearing a potential employer is short on scallops, Jesmark cuts a leftover fish into circular domes to sell off—no one will ever know the difference, he says—but that’s an unexpected moment in a movie determined to avoid any. The aesthetic sensibility is verite, defined here as aggressively graceless handheld in the name of faux-verisimilitude, but the script’s been homogenized down to a series of predictable beats and the resulting over-familiarity entirely cancels out any atmospheric gains. Toward’s film end, the pediatrician tells Jesmark and Michela that he should talk to the baby to get its mind moving. “Oh no,” I thought, “that’s the prompt for a climactic voiceover monologue that will once again spell out the luzzu metaphor.” Sure enough, a few minutes later Jesmark cradles the child/plot point and begins spelling it out. A boat is made of many parts (yes, it is), but if you replace every single part…is it still the same boat? What’s the point of workshopping dialogue with non-performers to nail their argot and daily routine if it’s all flattened out to this texture? I did, however, enjoy the following exchange between Jesmark and a boat inspector and am willing to believe it came from real life: “All vessels require regular inspections.” “So do my balls.”

Salomé Jashi’s Taming the Garden takes its time clarifying the context for its opening stretches. In the Georgian countryside, massive trees are being removed from the earth, roots intact, and transported elsewhere. Assorted conversations eventually clarify that an arboreally obsessed millionaire (former prime minister Bidzina Ivanishvili) is paying for the relocation of all these trees for his own private garden, to generally mixed response from the citizens. Some cry on seeing trees they’ve lived next to and loved their whole lives being removed; others are less sentimental, since these removals will allow for much-needed roads to be built. (In one of those inadvertent gifts ESL subtitles offer, one man’s criticism of his fellow citizens who are against this project, which presumably is something like “They’ve been stupid their whole lives,” is rendered as the rather beautiful “Being stupid is for the whole life.” Right on.) There are some half-dozen shots here that are strange and uncanny: massive trees being transported through the night, backlit and swaying as viewed from the ground, or captured in daylight from an even more disorienting position near their waving tops. The music cues are a cut above average, with a zippy 16th-century chanson by Clément Janequin soundtracking the final reveal of the wholly constituted garden: gleaming, new and bathed in sprinkler mist, it’s almost CG-looking despite its evident reality. But, well-composed though its frames uniformly are, much of Jashi’s film lies flat: the stage is set, but rarely does anything interesting manifest within its borders.