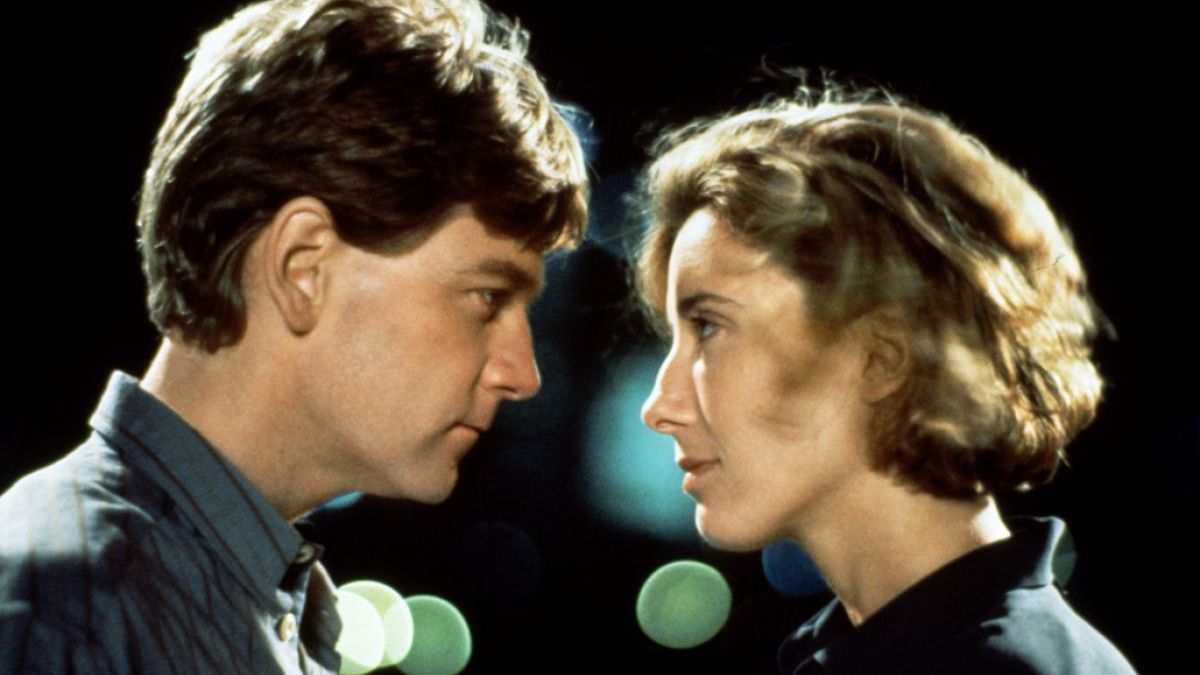 Kenneth Branagh was only 29 when he wrote, directed, and starred in his debut feature, a rousing adaptation of Shakespeare’s Henry V that garnered massive critical acclaim upon its release in 1989. As a result, the young filmmaker was offered every costume drama and literary adaptation on the studios’ development slates, but he turned them all down in favor of an original screenplay by future Queen’s Gambit auteur Scott Frank that had been kicking around for years. Dead Again was Frank’s throwback to the gothic melodramas and film noir pictures of the 1930s and ’40s, a gloriously theatrical combination of detective story and supernatural thriller that was a perfect match for Branagh’s brash exuberance. Branagh stars as a private eye hired to determine the identity of an amnesiac woman (Emma Thompson); as he works on his case and inevitably falls in love with her, he begins to realize that they may be connected via past lives – and that he might have even murdered her decades earlier. Deviating from the script’s plan, in which different actors were to play the couples in the two time periods, Branagh casts himself and Thompson as both couples, presenting the period material in a Mr. Arkadin-inflected black-and-white and going for broke with a sense of high style in every scene. Branagh’s precociousness led him to be compared (both favorably and unfavorably) to Arkadin helmer Orson Welles in the wake of Henry V’s success, and he leans into the affinity here; Welles once remarked that a film set was the best electric train set a boy ever had, and Branagh clearly feels the same way – you can sense his unadulterated joy at being handed the reins of a well-resourced genre picture in every heightened visual and aural flourish. Dead Again is newly available on Blu-ray from Imprint with several extras that really dig into its making and meaning: there are two great commentary tracks (one by Branagh, one by Frank and producer Lindsay Doran), and a superb visual essay by filmmaker Ian Mantgani that places Dead Again in context with both the classic suspense films to which it pays tribute and the other mid-range studio releases of its own era.

Another elegant and witty thriller, the 1936 comic mystery After the Thin Man, is also new to Blu-ray with a flawless transfer from Warner Archive. Director W.S. Van Dyke, screenwriters Frances Goodrich and Albert Hackett, and stars William Powell and Myrna Loy had all struck gold with the original The Thin Man two years earlier, and their reunion to continue the story of married sleuths Nick and Nora Charles resulted in one of those rare sequels that both retains the charm of the original and expands and improves upon it. Having established Nick and Nora as cinema’s most happily married and painfully charming couple in the first movie, the creators of After the Thin Man take full advantage of the freedom that comes with not having to worry about winning the audience over; the movie is even more effervescent and relaxed than its enchanting predecessor, and more visually sumptuous thanks to a greatly increased budget. Over 85 years after it began, the Thin Man series still represents something relatively uncommon in Hollywood cinema as a smart and romantic portrayal of a couple not falling in or out of love but simply existing in a state of blissful compatibility; I can’t think of many relationships like the one made so diverting and enviable by Powell and Loy in these movies. Fans of fast badinage and cheerful musical numbers will find plenty to enjoy here, with the added bonuses of some great San Francisco location work and a young James Stewart in an extremely enjoyable supporting role. As is frequently the case with Warner Archive titles, the disc includes irresistible extras from the studio vault, including a comic short starring Robert Benchley (“How to be a Detective”), a radio program with Powell and Loy, and a classic cartoon (“The Early Bird and the Worm”).

After the Thin Man is one of two gorgeous new pressings of vintage studio fare this week; the other is Paramount’s Blu-ray of the Danny Kaye musical comedy The Court Jester, which showcases a stunning new 6K scan of the picture’s original VistaVision negative. In his informative interview on the disc, Leonard Maltin notes that no expense was spared in the making of this film, and it shows – The Court Jester is a feast for the eyes, exquisitely mounted in grand classical style with every color imaginable jumping off the screen via meticulous costume and production design. The film was written, produced, and directed by Norman Panama and Melvin Frank, who had started as a team in radio writing for Bob Hope. When Hope needed a couple scribes for one of his movies, Panama and Frank broke into screenwriting with the hilarious My Favorite Blonde and went on to collaborate on a number of the comedian’s best pictures (most notably Monsieur Beaucaire) before eventually co-writing the Bing Crosby-Danny Kaye smash White Christmas (1954). The Court Jester was nowhere near the success in its time that White Christmas was, but it represents the zenith of Kaye’s onscreen career: as a rebel going undercover as a jester in the court of an illegitimate king, he sings, dances, jokes, and is equally winning as both a comic buffoon and romantic lead. Panama and Frank’s script is a dazzling feat of structural gymnastics, as they combine numerous mistaken identities with criss-crossing palace intrigues and comedic action set pieces, jamming the movie with incident but somehow keeping all the balls in the air in a manner that makes it all seem effortless. Fast and funny, sweet and sardonic, and expertly crafted on every level with a supporting cast that’s allowed to be every bit as dynamic as Kaye, it’s a supremely engineered entertainment machine that I’ve never seen look or sound as good as it does here.