“Shooting at Magic Hour Can be Very Nerve-racking”: DP Dariusz Wolski on News of the World 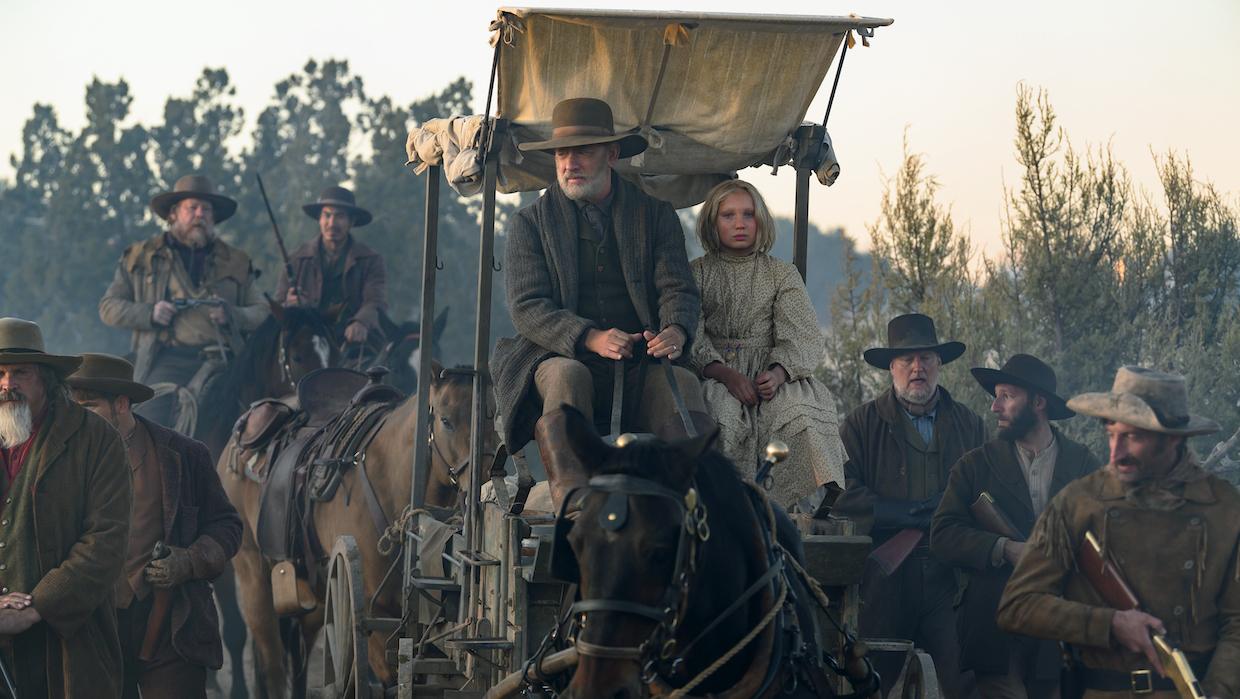 Tom Hanks and Helena Zengel in News of the World

by Matt Mulcahey
in Cinematographers, Columns, Interviews
on Mar 16, 2021

Repeat business: It’s a hallmark in the long career of Dariusz Wolski. If the Polish-born cinematographer shoots one movie for you, there’s a decent chance he’ll be back for another. He’s lensed two movies for Tim Burton, Tony Scott and Alex Proyas; four alongside Gore Verbinski; and six for Ridley Scott.

Wolski picked up the Oscar nod yesterday for News of the World, a post-Civil War tale of a traveling entertainer (Tom Hanks) tasked with transporting a young girl (Helena Zengel) across Texas to her only living family.

The film is currently available on VOD and hits physical media on March 23rd.

Filmmaker: While doing the press rounds for News of the World, Paul Greengrass has talked a lot about his childhood love of Westerns. Growing up in Poland in the 1960s, were American Westerns something you were interested in or even had access to?

Wolski: Paul and I are pretty much the same generation, so Westerns had a very strong impact on us both growing up. Because we were in Poland behind the Iron Curtain, when I had the chance to see a Western it was very, very special.

Filmmaker: Were theaters playing contemporary Westerns like Leone and Peckinpah, or was it revivals of Hawks and Ford?

Wolski: It was old classics. I remember seeing Rio Bravo, High Noon and The Searchers, the big movies that played in American theaters. They were a very big influence on me. So were some of the great westerns from the 1970s, which were slightly overlooked like Little Big Man, which had a little bit more accurate historical perspective.

There was actually a very funny thing that happened when I was young. We had these big billboards for the movie theaters in Poland, and there was this great image of James Dean with a cowboy hat [advertising George Stevens’ Giant]. I thought, “This is going to be a great Western!” I was like 12 or something. Then I saw the movie and was like, “They’re just talking all the time. How boring is that?” Then, of course, later it became one of my favorite movies ever. But I just remember that disappointment after seeing Giant for the first time. (laughs)

Wolski: Yeah, on top of it. I was a 12-year-old, expecting a big shootout and the bad guys coming in on horses and Native Americans attacking a stagecoach. Then I was like, “What the hell is this?” And they had cars in Giant. I couldn’t understand it at all.

Filmmaker: Were there any particular films outside of The Searchers that Paul wanted you to revisit for News of the World?

Wolski: Paul actually mentioned something really, really out there when I talked to him originally. When we first talked about the style of the film and how much of it would be handheld, Paul mentioned this movie by Pier Paolo Pasolini called The Gospel According to St. Matthew. It’s a black and white film from the early ’60sshot handheld—not as a style, but probably because they didn’t have any money. It has these beautiful compositions in this very sparse Italian landscape. He threw that film at me completely out of the blue and I kind of said, “Hm, that’s interesting.” So, that was our starting point.

I like to call News of the World a movie about restraint. We didn’t want to use cranes and helicopters and camera cars. We wanted to keep things basic and try to find great compositions within the locations. There’s so many ways to skin a cat, but I think we found the right way to tell this story. It was funny, though, during prep in order for me to communicate with Paul – because he wasn’t there yet – I bought a tiny drone and started shooting locations and sending the footage to him so he could start thinking about how he wanted to stage things. His first response was, “I just don’t like to have the camera from that perspective.” And I said, “No, I get it. I just wanted to give you a sense of the space.” But then when we started shooting the movie he said, “I think maybe we should have some helicopter shots.” (laughs) We had a great relationship. Just teasing each other, throwing out ideas. There was definitely a mutual respect.

Filmmaker: Tell me about the camera and lenses you used for News of the World.

Wolski: I used the Alexa Mini LF, which I was very curious about. It had just come out so it was a little nerve-racking to get it on time. I think Tom Hanks’s and Paul Greengrass’s names helped a little bit in getting the cameras. (laughs) But we did get them last minute. It’s smaller than an Alexa 65 but larger than the normal Mini, so you have a little shallower depth of field. For lenses, I used short Angenieux zooms and Panavision 65 vintage primes, especially for nights to have [a faster] stop. The Panavision 65s are very fast and I like that they are not perfect. They’re pretty, but not perfect. That’s what I always look for.

Filmmaker: In the story, Hanks travels hundreds of miles across Texas, but in actuality you shot three of his stops in one place—the Bonanza Creek Movie Ranch in New Mexico.

Wolski: Yeah, we created Dallas, Red River and Wichita Falls there. We changed the entrances, redressed it and tried to avoid shooting the same angles. Dallas was busier and was more carriages and horses, whereas Red River was more cows and tents. The last town that [Hanks] goes to is San Antonio, which is pretty much fully CG except the facade and then the interior of the church. There was really just one big wide shot of the city, so there was no reason to build it.

Filmmaker: Hanks performs readings from newspapers for crowds in those cities. How did you differentiate each performance?

Wolski: Well, the locations themselves did some of that work. The first reading was in a barn at night. The second one was in a church, so that gives you a different look. The third one in Dallas was in kind of a town hall. There’s actually a funny story behind the Dallas location. It was the bar set at Bonanza Creek, but Paul was adamant that he didn’t want a bar scene in the movie, because that is in almost every Western. But that bar set was such a great space. Someone had the idea to just get rid of the bar and Paul said, “Oh yeah, that’s great.” It was such a simple thing—we just moved the bar out of the space. (laughs)

For the lighting, we were going to try to do as much as possible with real kerosene lamps, but had some restrictions because of safety concerns from Universal. So, basically around Tom, we used real kerosene lamps as our main source to light him, then had to come up with a way to electrify the ones in the background at the last minute. We used very simple, very low exposure top light for ambience.

Filmmaker: Did you use LEDs in those electric faux-lamps?

Wolski: No, actually we used old tungsten bulbs that were dimmed down and flickering. No matter how good the computer program, there’s no algorithm that can match a real flame. It was kind of an old fashioned thing. We had a lot of guys up nights putting that stuff together, because some of those lights from the prop houses had huge bulbs inside them from the 1950s and we don’t need that much light these days. So, we had to rewire them.

Filmmaker: There’s some really beautiful dawn and dusk shots in the film, and some are full dialogue scenes. How were you able to keep that magic hour look consistent?

Wolski: I had a different approach for different scenes. The first dusk scene we shot, I tried to push it as late as possible, then we had to reshoot it because Paul wasn’t happy with dialogue. That was tricky because if it’s cloudy, dusk is different than when it isn’t. We had to digitally help with the skies a little bit to make it match.

For the rest of our dusk scenes, we started a little bit earlier in the day and you pray that Paul ends up printing one of the later takes. For another one of those [dusk] scenes I actually did the big wide shot at magic hour and for the rest of [the tighter coverage], I lit it to create a bit of blue ambience and everything else was done with a real flame. In that case, we had time for them to do a lot of acting, but sometimes we had to scramble.

Filmmaker: The most expansive night exterior you had to deal with was in Erath County, where Hanks is coerced by a wealthy buffalo hunter into reading his propagandist newspaper to his workers. How did you approach lighting that space?

Wolski: When Tom is reading in the square, it was simple because we had a lot of real bonfires, then I added some lights in the shot that were digitally replaced by bonfires [in post] to give me more depth. Maybe it comes from working with Ridley Scott and using multiple cameras all the time, but I basically try to light the space, then you can put the camera wherever you want. I mean, put the camera in the place where it looks good too. (laughs)

Filmmaker: For action scenes, Ridley Scott might have a half-dozen cameras out there working. Was it a pleasant break to not have to worry about so many angles for News of the World?

Wolski: Well, for the big speeches we were still using three cameras, because you don’t want to burn Tom out. A lot of those scenes were way longer [than what ended up in the final cut of the film]. If you’re rolling multiple cameras, when you’re happy with a take, you’re done. Then you use those cameras for reverses and reactions and stuff. Otherwise we would still be shooting this movie. (laughs)