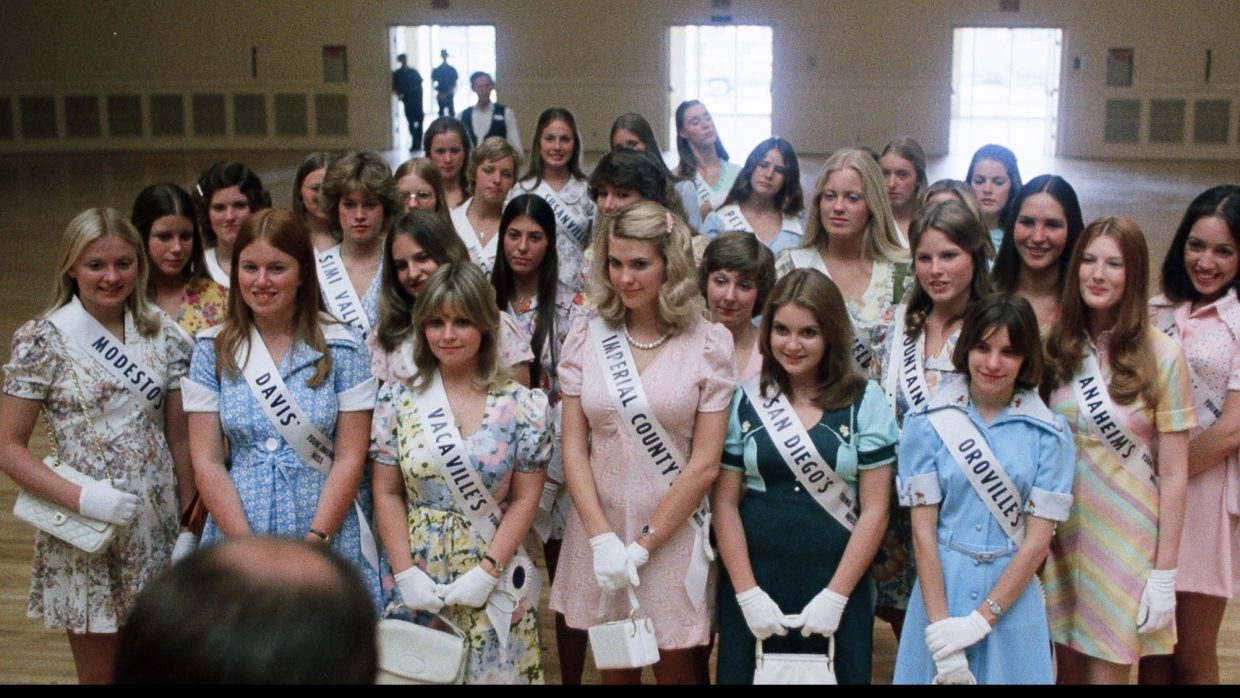 I’ve written here before about my fondness for director Michael Ritchie, particularly his streak in the 1970s when he made one great movie after another about the dark side of the American competitive spirit. Most of his best films – Downhill Racer (1969), The Candidate (1972), The Bad News Bears (1976) – are wry meditations on what it really means to win (and lose) in a culture where winning is valued above all else; one of the most memorable moments in all of his work comes at the conclusion of The Candidate, when Robert Redford’s senatorial candidate wins his election but loses his soul and blankly asks, “What do we do now?” Three years after that masterpiece, Ritchie made the equally fine Smile, a hilarious and poignant satire that makes its Blu-ray debut on the Fun City label. A movie that smoothly veers back and forth between generous empathy and ruthless cynicism, Smile follows a group of teen beauty contestants (among them Melanie Griffith, Annette O’Toole, and Colleen Camp) as they compete for the approval of judges led by car salesman Big Bob Freelander (Bruce Dern in one of his greatest performances). Ritchie and screenwriter Jerry Belson deftly juggle dozens of characters and subplots, following the contestants, judges, townspeople, and production crew behind the pageant; the tapestry that results is a layered examination of competition from an astonishing array of perspectives. Ultimately Smile is, like The Bad News Bears, one of Ritchie’s great movies about winning by losing; his winners tend to be broken men and women by the time they’ve achieved their goals, while his losers maintain their dignity and sense of purpose. Smile is not only a beautifully written, directed, and acted movie but an impeccably photographed one by the great Conrad Hall, and Fun City’s new 2K scan represents the best home video presentation the film has ever gotten. Throw in a lively commentary track by actor Pat Healy and curator Jim Healy, a delightful new interview with Dern, and liner notes by film historian Mike McPadden, and you’ve got an essential package for any self-respecting aficionado of the New Hollywood.

Another great ensemble comedy, Fast Times at Ridgemont High (1982) gets an upgrade from Criterion this month with a new transfer and a collection of excellent extras. Like Ritchie and Belson, Heckerling and screenwriter Cameron Crowe (both making their feature debuts on Fast Times) have a unique gift for humanist comedy with an edge; their love for their characters is infectious in every frame, and every character gives the sense of having an independent life outside of the movie. This is true not only of the leads played by Jennifer Jason Leigh, Phoebe Cates, Judge Reinhold and Sean Penn, but also of the characters who have only a few lines of dialogue and a few minutes of screen time – of course, it helps when you fill out your supporting cast with actors like Forest Whitaker, Anthony Edwards, and Nicolas Cage. When it came out in 1982, Fast Times was marketed as just another teen sex comedy in the Porky’s/Last American Virgin mold, but it was always far more than that and has only improved with age; wise, witty, and exuberant, it stands alongside American Graffiti and Dazed and Confused as a richly observed coming of age classic. Criterion’s new release restores Fast Times to Heckerling’s preferred cut before her scuffles with the MPAA (really just a matter of an additional shot or two, but still nice to have available after all this time) and includes some outstanding supplements: a 45-minute AFI lecture by Heckerling from 1982; a new conversation between Heckerling, Crowe, and Fast Times enthusiast Olivia Wilde; and the commercial television version of Fast Times, which contains footage not seen in the theatrical release. In a nice bit of serendipity, Kino Lorber has given Crowe’s Fast Times follow-up The Wild Life (1984) its Blu-ray debut; while the film lacks Heckerling’s delicate tonal control, like its predecessor it boasts a strong cast of then rising young stars (Eric Stoltz, Lea Thompson, Chris Penn), and it contains enough of Crowe’s offbeat insights into young adult life to be worth a look.

My final recommendation this week is Kino’s second boxed set devoted to the films of actress Carole Lombard – titled, appropriately enough, Carole Lombard Collection II – which provides an opportunity not only to dig into the work of this singular movie star, but also to study the work of three relatively underrated directors. One of those directors, Mitchell Leisen, is having a bit of a resurgence at the moment thanks to a beautifully curated selection of his output on the Criterion Channel, and the recognition is long overdue; an exceptional visual stylist with a sensitive eye toward performance, Leisen helmed some of the most eccentric and satisfying romances of his era. This is certainly true of Hands Across the Table, a 1935 comedy in which Lombard stars opposite a young Fred MacMurray, both playing gold diggers who make the mistake of falling for each other. It’s a standard rom-com premise, but in Leisen’s hands it becomes something truly odd and original as he shifts the audience’s sympathies in surprising ways and injects as much calculation and misanthropy into the central romance as it can possibly bear without collapsing under the discordant notes. Lombard’s performance, meanwhile, is a total stunner – she never seems to be straining for humor, yet she’s riotously funny; never forces her glamor, but is gorgeous; and creates a character that is somehow both ethereal and completely relatable. These traits are on full display in the other two movies in the Kino box, William K. Howard’s The Princess Comes Across (1936) and Walter Lang’s Love Before Breakfast (1936); all three films showcase Lombard at her effervescent best, and all three are instances of reliable Hollywood pros at the top of their form behind the camera. The performances and visual styles and a whole lot more are all covered in depth on excellent commentary tracks accompanying the films: filmmakers Allan Arkush and Daniel Kremer on Hands Across the Table and The Princess Comes Across; and film historians Alexandra Heller-Nicholas and Joshua Nelson on Love Before Breakfast. All four of these well-informed film lovers have a wealth of knowledge to share, and they do so with clarity, erudition, and enthusiasm.