“We Have to Get a 65-Piece Orchestra with Strings”: Eugene Ashe on Sylvie’s Love 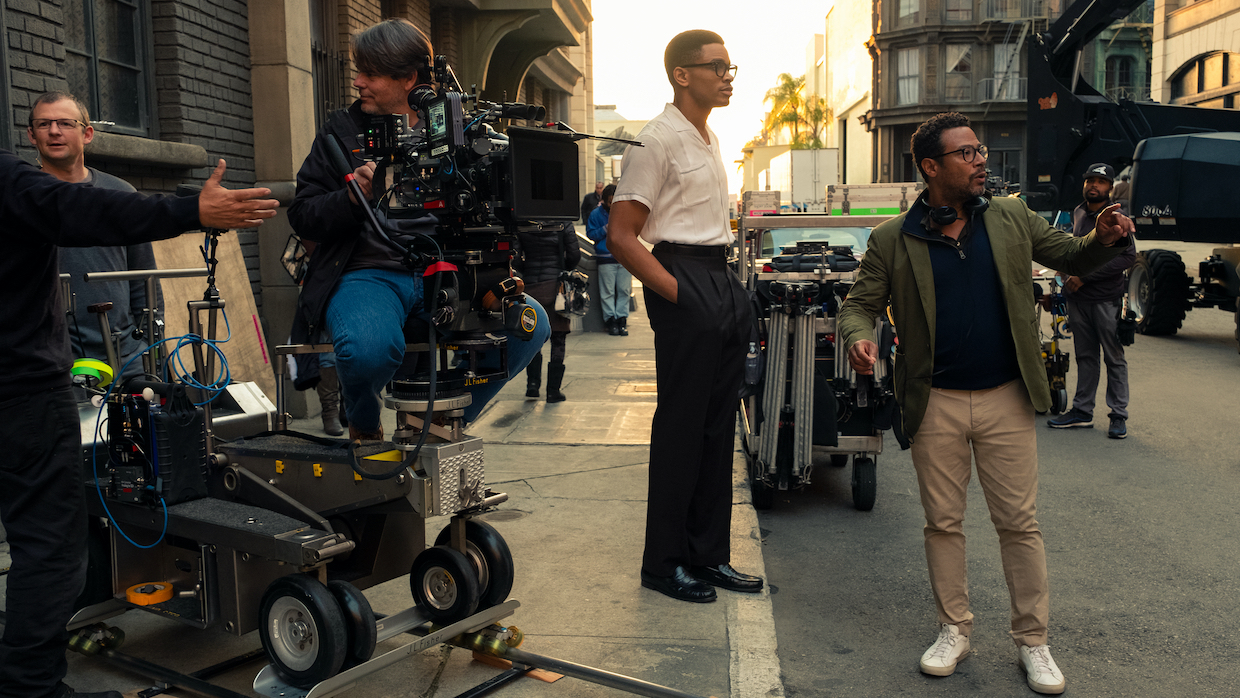 Nnamdi Asomugha and Eugene Ashe on the set of Sylvie's Love

by Jim Hemphill
in Directors, Interviews, Screenwriters
on May 18, 2021

Writer-director Eugene Ashe was a successful musician before he started making films, a background evident in every exquisite frame of Sylvie’s Love. Not just because male lead Robert (Nnamdi Asomugha) is a saxophonist and the movie features the best jazz soundtrack since ’Round Midnight, and not just because female lead Sylvie (Tessa Thompson) begins the film working in her dad’s record store and has an encyclopedic knowledge of music and knows how to tailor recommendations to each customer. The musical influence goes beyond these considerations to inform every texture and detail of Ashe’s late ’50s-early ’60s set drama, a gloriously romantic meditation on love and work and how they come into conflict when two people are in love with their work. As Robert and pioneering television producer Sylvie repeatedly come together and separate amidst their professional challenges and triumphs, Ashe orchestrates every component of the narrative with an impeccable sense of shape and rhythm, creating in the audience a desperate desire to see the two lovers end up together. Although the film’s cinematic influences are numerous and obvious—the décor and compositions reference everything from Doris Day comedies to The Way We Were and Douglas Sirk—there’s nothing derivative about the piece; Ashe absorbs his inspirations but doesn’t imitate them, instead using the visual language of late classical Hollywood cinema to tell his story the way it would have been told in the era in which it takes place. I got on the phone with Ashe to learn about his process and began by asking him where the initial inspiration came from. Sylvie’s Love is currently streaming on Amazon Prime Video.

Eugene Ashe: It started with me watching things like Breakfast at Tiffany’s and Delbert Mann and Doris Day movies and seeing the parallels between the white characters in those films and old photographs of my family, or the photos on the covers of old jazz albums in my house. The Black people in those photos were not depicted in the films of the time, and they aren’t really depicted in modern movies set in that time either. Most of the time movies set in that period are talking about the civil rights movement or dealing with other heavy issues, so they don’t have that glamor—you’re not going to see Coretta Scott King in a tiffany blue Chanel gown, you know? But struggle isn’t the only thing that was going on for Black people: Sidney Poitier was winning Oscars, Nat King Cole hosted a TV show on ABC, the Kennedys were having parties and hanging out with Black people. Where was that in movies? In some ways I think that framing the period only through adversity and the things that were happening to us is a way of erasing our accomplishments.

Filmmaker: What were some of the other specific movies you were thinking about as models or reference points when you were formulating the look and sound of Sylvie’s Love?

Filmmaker: Was Dick van Dyke where you got the idea to make Sylvie a television producer?

Ashe: Not exactly, but it was my sole reference for New Rochelle life when she married Lacy. The television thing comes more from Lucille Ball, because she was so involved with the production of her show. I love the idea of all the firsts that we don’t get to see—my mother, for example, was an executive at AT&T. I’m sure she was not the first Black female executive there, and I don’t know who was. There are so many people like that who existed, who did things first and we have no idea who they are. That’s where the idea for Sylvie came from.

Filmmaker: Obviously casting is of paramount importance in a love story like this. Who did you cast first and how did you choose the two leads?

Ashe: I met Nnamdi Asomugha first, but he was introduced to me solely as a producer—we were meeting about working together in that capacity, as he had produced films like Harriet and Beasts of No Nation and was looking for projects. Then the attorney who connected us told me he was also an actor and said he was really good in this movie called Crown Heights that won the audience award at Sundance. I watched it and thought he was a really great actor, and asked if he would be interested in playing Robert. He was interested, but he didn’t want to be presumptuous—he’s the kind of guy who likes to really earn everything he does. And he did earn this—he learned how to play the saxophone, which was not easy, and did a lot of work to disappear into the character. He’s a former NFL pro, so he had to lose a lot of weight and get rid of that muscle mass, because men back then didn’t look that way. You didn’t see guys who looked like The Rock, you know what I’m saying?

Once we had Nnamdi on as both an actor and a producer, that opened a lot of doors and gave us a lot of access I don’t ordinarily have, both because of who he is and because he’s married to Kerry Washington. So, when he asked me who I wanted to play Sylvie and I said my dream would be Tessa Thompson, he said “I met Tessa Thompson at the Met gala, I can get to her. Who else?” “Well, there’s this guy Regé-Jean Page…” “I love that dude!” This was before Bridgerton, but he had been on a Shonda Rhimes show called For the People, and Nnamdi could get to him because Nnamdi’s wife is part of the Shondaverse thanks to Scandal. It was great having all that access and open doors, and every single person we went to with the script said yes—two people couldn’t do it due to scheduling conflicts, because we were locked into the 3½ weeks when we could get Tessa, but they all wanted to do it.

Filmmaker: What kinds of conversations did you have with Tessa Thompson about the role and how did you convey what kind of movie you wanted to make?

Ashe: That’s one of your biggest jobs as a director, making sure everyone is aligned with your vision. I gave Tessa 75 movies to watch, and she got it. She watched a lot of Diahann Carroll and Eartha Kitt and Cicely Tyson and Doris Day and Audrey Hepburn, and she watched not just their movies but interviews to see how people talked and carried themselves then. Just like Nnamdi had to get very lean to have a physicality more like Jimmy Stewart than what you see in male movie stars today. It was important that everyone look authentic to the period.

Which leads into the visual style and Declan Quinn’s cinematography. We really wanted to make it look as if the movie was shot during the time in which it takes place, which is one of the reasons we shot on film. Initially we watched contemporary films set in the past like Carol, A Single Man and Jackie, and we noticed that they all used Cooke lenses and all shot on Super 16. We were going to go for the same kind of intimacy as those films, but moved away from that when we found out that Tessa only had a limited amount of time and we would have to shoot the film in February. That meant shooting in Hollywood on backlots instead of in New York on the streets, and when Declan and I walked the backlots we said, “OK, this is not Carol, it’s old Hollywood Technicolor.” That meant big lighting units to cast the kinds of shadows you saw in movies back in the day, and trying to replicate the way old films were shot, even in the interiors. When you see offices in old movies, the scenes are framed in a certain way, and I was interested in doing the same thing. I have a background in architecture, so I think spatially and compositionally—I don’t like a lot of gratuitous close-ups. I only use them the way directors of that era used them, for very specific effects. When Sylvie first watches Robert playing in the club, for example, there is a series of close-ups where everyone else disappears and it’s just the two of them in the world—we also dropped out all the instruments but the saxophone.

Once you start making those kinds of decisions it affects everything in the movie, not just the lighting and composition. It means now we have to get a 65-piece orchestra with strings, because modern music will feel too anachronistic. It means the clothes have to be tailored for the period; sometimes I see period movies and the clothes are right, but the sleeves are too long or something—when I see that in a movie set in the past it throws me out of it, because that’s not the way people wore their clothes then. No detail is insignificant or unimportant. Take the Chinese restaurant—I don’t know why, but in movies of that era there’s always a scene in a Chinese restaurant. Everything our prop guy Steve Rick had in that restaurant down to the menus was vintage—if you see a pad of paper and pens in the movie, it’s paper and pens that fit the time. You have to get every detail right, because if you get any of it wrong the whole thing is wrong.

Filmmaker: You mentioned your background in architecture, and you’ve also had a successful career in music. How does that inform your approach to filmmaking?

Ashe: I look at all the versions of art that I make—architecture, music and film—as having one thing in common, which is that they’re all very collaborative. You have to get people aligned with your vision, but then give them the freedom to do the thing you hired them for and not micromanage them. I remember at one point Tessa told me she didn’t understand what I wanted from her in a given moment, and I said, “It’s like Doris Day.” She said, “I can’t do it like Doris Day, I have to do it like me, baby.” [laughs] And that’s great, because ultimately in this movie you’re getting those qualities of Doris Day and Audrey and all that, but you’re also getting Tessa. You need to have a strong idea of what you want the movie to be, but you don’t want to be beholden to the movie you’re running over and over in your head, because then you can miss the even better thing it could be. Ultimately you have to make sure it’s always going in the right direction, but input from someone else might make it more what you want, and you have to be open to that.