“Can Jupiter Use his Powers and Wisdom to… Rectify Racial Injustice and Inequality?”: Ram Devineni and Yusef Komunyakaa on their Tribeca-Premiering AR Comic Book Jupiter Invincible 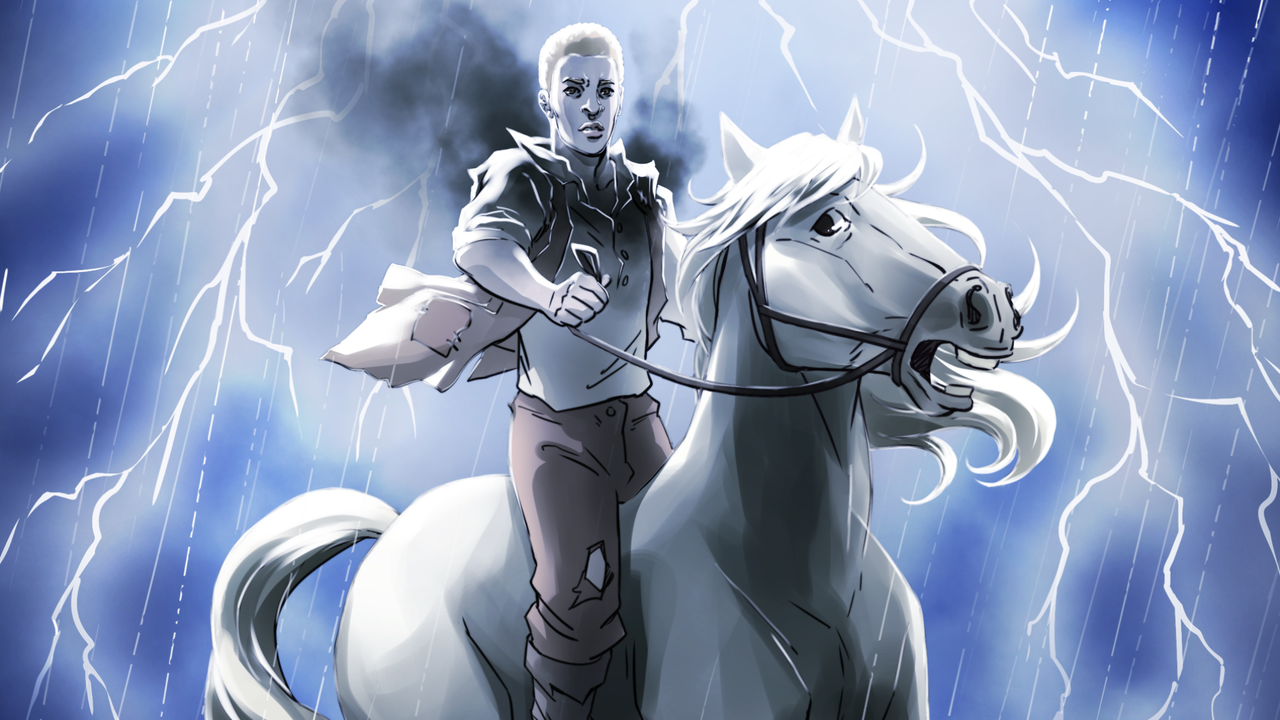 Jupiter Invincible, the latest augmented reality comic book from Ram Devineni and his NY-based Rattapallax media house, marks a bit of a departure for the doc filmmaker and technologist. Best known in the AR world for his comic book series Priya’s Shakti — starring India’s first female superhero and rape survivor (and UN Women-designated “gender equality champion”) — Devineni now travels both back to these shores and back in time, all the way to pre-Civil War Maryland. And he brings along an impressive trio of collaborators.

Our superhero of this tale, the titular Jupiter, is the invention of the Pulitzer Prize-winning poet Yusef Komunyakaa. And though Jupiter might be an enslaved teenager he’s also immortal — and able to join forces with the more mortal superhero Harriet Tubman on her Underground Railroad mission to freedom. Together with illustrator Ashley A. Woods (who’s worked on Tomb Raider, Niobe and the Ladycastle series) and editor Eric Battle (who’s drawn for both DC Comics and Marvel Comics), Devineni and Komunyakaa have created a futuristic history lesson able to leap from festival exhibitions, to a staged reading, to (with any luck) a classroom near you in a single bound.

Filmmaker was fortunate enough to catch up with half of the creative super team, Devineni and Komunyakaa, just prior to the comic book’s TFF launch on June 9th.

Filmmaker: Ram, I believe you’re the only non-African-American to be involved in this project, so how exactly did it come about? Was the idea for Jupiter Invincible brought to you by one of the other artists?

Devineni: The initial idea for the comic was mine, but it was more of a concept. I wanted to create a story about an African-American enslaved person who had the power of immortality. Even though he could not die or be killed, he did not have foresight. So he would witness the repercussions of his actions, even 100 years in the future. Can Jupiter use his powers and wisdom to change the course of history to rectify racial injustice and inequality? That was the nucleus of the idea, but it was Yusef Komunyakaa who made it into reality by writing a brilliant story with complex characters and scenarios. Yusef can speak more to that.

Komunyakaa: I hope Jupiter Invincible renders a slanted gaze into that brutal institution where rather obscene wealth and privilege rose out of, and has been passed down generations. Jupiter is an albino, and this makes him doubly an outcast. After getting struck by lightning, going to the netherworld where his mother reigns after dying in childbirth, and then returning to the plantation with skin now Black, he seems an evenhanded young man who feels that he was born to “talk” horses into obedience. However, Jupiter is naturally defiant because he says, “My heart is not a slave.”

Filmmaker: You two have collaborated with illustrator Ashley A. Woods and editor Eric Battle to create Jupiter Invincible. So how did this process work? Did you approach the project as a unit, or did each of you tackle only your specific area of expertise?

Devineni: Although I am the overall producer and brought all the different talents together, I believe it was a collaborative process and that everyone shared their opinions and inputs into every aspect. My initial idea was very rudimentary but became concrete after conversing with Yusef about the story and characters. We spent several months in 2019 developing it. After our conversations Yusef would write a few more pages until we had enough for the first edition. This was Yusef’s first comic book but he is a master poet and storyteller. He wrote it more like a stage play, so I had to convert it into the comic-book format before working with Ashley A. Woods on her stunning designs and artwork. I really believe we had the perfect team to create Jupiter Invincible. There was beautiful synergy between everyone involved in the project.

Filmmaker: I’m very curious to hear about the research that went into the project, specifically at the Apartheid Museum in Johannesburg and at the Hampton Plantation in Maryland. In addition, you’re bringing to life photos from the Library of Congress. So how do all these elements intersect in the final work?

Devineni: The idea to create the comic book started in the summer of 2019, when I was selected by American Arts Incubator to run a comic book workshop in Durban, South Africa. This was my first trip to South Africa, and I had very limited knowledge of its history. While in Durban I met some of the Indian and Black freedom fighters who were involved in the struggle to end apartheid. They told me their stories. Later I would spend time in Johannesburg researching the movement at the Apartheid Museum.

Looking at the historical photos, there were many similarities between the apartheid complex and the power structures that were created during the Jim Crow era in America. Afterwards I spent several months at the Merriweather Art District in Colombia, Maryland where I visited the Hampton Plantation, and followed the Underground Railroad and Harriet Tubman’s pathways to freedom. What was apparent about slavery was a vast system to brutalize and exploit African-Americans that continued after the Civil War. The shameless opulence of the plantation mansions contrasted dramatically with the slave quarters. I relentlessly photographed everything, knowing I would use the materials for a future story.

It was only later when I started working with Yusef on the comic book that I decided to integrate the images into Ashley’s artwork through augmented reality. It was critical to show the reality of slavery and life on the plantation. I also utilized the digital archive of photos and stories from the US Library of Congress and put them into the AR. Even though our comic book is fictional there is sound historical research, and the characters are based on authentic people.

Filmmaker: Jupiter Invincible comes with the exhibition at Tribeca, followed by another at the Schomburg Center Literary Festival. And then you’ve got the staged reading at the Stella Adler Studio (of Acting). So why this multi-pronged strategy? Are you hoping to reach as many different audiences as possible?

Devineni: I am proud that our comic book and exhibition is very approachable for young audiences and accessible from different avenues. Through the augmented reality in the book and the exhibition at Tribeca audiences can see the imaginative use of AR to go deeper into the story and history and experience the spectacle of the technology and see Ashley’s powerful artwork. While at the Schomburg Center Literary Festival we want audiences to appreciate the beautiful language written by one of America’s greatest poets, Yusef Komunyakaa. I also believe the comic is easily adaptable for theater and cinema, and we hope to showcase this at the Stella Adler Studio. We are also doing virtual events and workshops at Comic Con Africa. We want to make the correlation between apartheid in South Africa and slavery in America.

Filmmaker: Do you have a plan in place to eventually get Jupiter Invincible into schools across the US?

Devineni: We are releasing the comic book for free in multiple formats, and we hope to bring this back to Columbia (Maryland) and introduce it in their libraries and school system. Obviously this is a complicated process with the pandemic and with schools reopening, but we have some remarkable partners and supporters in the community. The comic book is a mixture of pop culture art, literature, history and technology — perfect for young people and schools.

When I went to school in New Jersey in the 1980s and 1990s there was very little exposure to stories about African-Americans or slavery. The only time I learned about slavery in school was when we watched the TV miniseries Roots, by Alex Haley. That was it, and the topic was never mentioned again. I believe bold new stories and narratives are needed to create a cultural shift and challenge perceptions about race in America.

Komunyakaa: Personally, I feel that such a comic book goes beyond mere entertainment, and it probably could create a slightly diffident dialogue. We have just begun; this is the first installment of an imagined character in a historical landscape. And everything that happens on the page has meaning. I feel that comedy and satire also enter this psychological space. We have just opened the first door to Jupiter’s life. Get ready for surprises and twists in the labyrinth.