“An Overt Anti-Patriarchal, Anti-Assimilationist Gesture Within the Framework of ‘Queer Refusal'”: Angelo Madsen Minax on His Tribeca-premiering North By Current 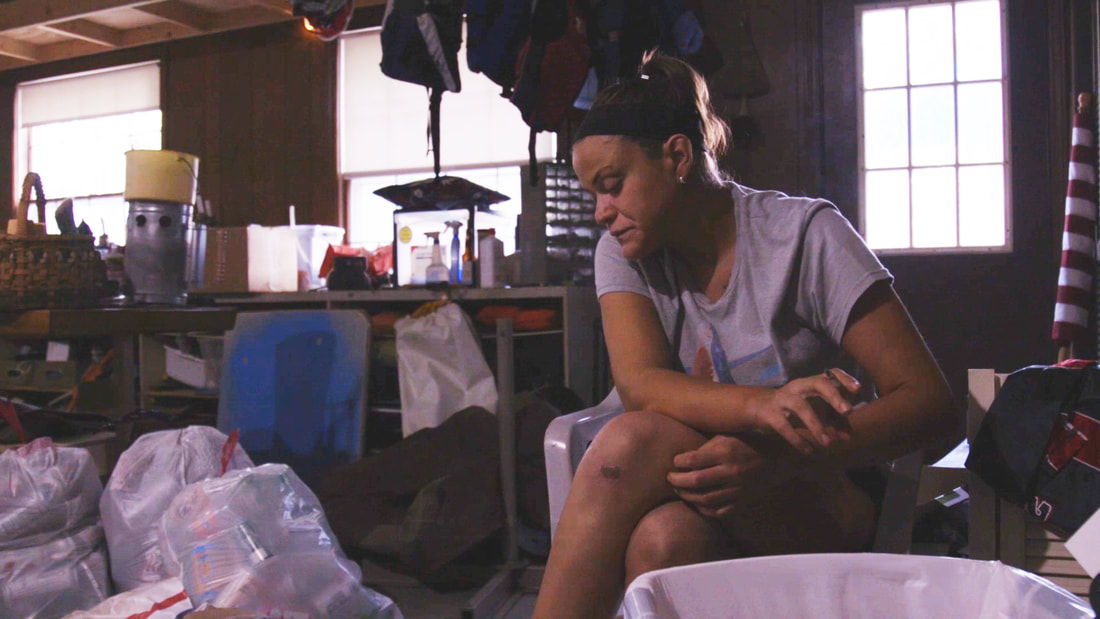 One of the most thrillingly radical aspects of Angelo Madsen Minax’s astonishing North By Current, which premiered at the Berlinale and now makes it North American debut at Tribeca, is the film’s centering of absence, of its maker’s firm belief in the idea that “a viewer is not entitled to every piece of information.” Minax began shooting North By Current upon his return home to rural Michigan after the death of his niece, a toddler whose passing put Minax’s emotionally fragile sister and her formerly incarcerated husband in the crosshairs of Children’s Protective Services (which in turn led to law enforcement investigating CPS). The life-shattering event also set the stage for another confrontation of sorts, between Minax himself and his Mormon parents who felt themselves still grieving the “loss” of their own child — a girl named Angela who’d transitioned to this stranger with a camera filming in their living room.

And yet North By Current staunchly refuses to be about any of this. Instead Minax focuses on the bigger universal picture – love and the change of seasons that we all share. Ultimately, his steadfast withholding of answers allows us to discover deeper ones within ourselves.

So to find out how he did (and did not) do it, Filmmaker reached out to the multidisciplinary artist just prior to the doc’s North American premiere (in TFF’s Viewpoints section).

Filmmaker: This is exceptionally brave filmmaking on so many levels — especially since, according to your director’s statement, you set out to create something that adheres to the notion of “queer refusal.” So was it scary or liberating (or both) to base a film on the negative space, to focus on what you don’t want to show?

Minax: Thanks so much for these generous questions. Perhaps oddly so, it wasn’t scary at all to concentrate on the negative space and the in-between moments in this project. You kind of described my whole practice. In my more non-linear, non-narrative work, the idea of reveal, specifically what to offer and what to withhold, is always a central question for me. How is information unraveled and how does a viewer understand their entitlement to that information? It’s often understood as a given that if there is content to share in a film that a viewer is automatically entitled to that content. But in my work there are usually questions that challenge the public/private – what is meant and for whom it’s meant for. I think about how certain parts of a story are sacred and not for everyone’s consumption. There are so many moments I chose not to include in this film. But I also think about the lyricism of subtle movements, like curtains hovering in a gentle wind, and how that kind of poetry that lingers on the uneventful, the in-between, also serves to speak gallons to larger ideological frameworks.

Lee Edelman and Heather Love’s (and others’) idea of “Queer Refusal” is an amazing concept to work from because I think of my formal approach to the film as one of resistance. Working the way I want to work, which doesn’t always involve narrative (even though this particular project is clearly narrative and “character-based”), is not only allowed, but is an overt anti-patriarchal, anti-assimilationist gesture, within the framework of “Queer Refusal.” A formal move that sidesteps and disregards the prescribed ideas about what a trans film should do (as if a trans film requires a particular type of disclosure), or what a film that takes place in a rural location should look like, or just what kind of rewards (if any) a film should offer in general. Part of it too is that I just find the act of posing subtexual questions a more rewarding viewing experience than telling someone what to think.

Filmmaker: You’ve also referred to the film in terms of “transformational justice” and as a collaboration between you and your family. So how exactly did everyone work on the project? Did they participate behind the scenes all the way through to final cut?

Minax: I do think the film is rooted in the concept of transformative justice, in the sense that the project seeks to address a series of violences with non-violent approaches and/or harm reduction. The process of bringing together a group of people who are collectively and individually struggling to work on a creative project is one way to approach harm reduction, collective care, and mutual aid. This comes from the abolitionist framework and therefore feels extra suited for the film – as one chapter of my family’s struggle is with the violence of carceral culture and its patriarchal DB parent, ethics. That said, I’m an artist and filmmaker, not a trained facilitator.

I don’t have any grand delusions of equitable filmmaking. (Ha.) This was not a situation where I was “empowering” my family members to take the camera and tell their stories. It was actually quite a hierarchal process. I’m the director and editor. I’m the one that has the education and means to secure and use this equipment, has built the resources and access points to ensure its distribution. And I’m the one that will hit the export button for that last time. That power differential is on the table. This is in part why the film is ultimately from my POV. At the end of the day I can’t really speak for anyone but myself.

However, it was super important to me that my family members felt active in the process. This is where the collectivity is. We looked at lots of footage and cuts together. I wanted them to be in the know with how I was sorting and processing the information – what things I was most interested in. For example, my interest filtered toward larger questions about worldview and internal processes over the specifics of litigation – and we were clear and on the same page about that. I wanted them to think through what that might look like formally too. We talked about editing. How things are pointedly shaped by where and how we make cuts and juxtapositions. They were always onboard and excited to try things out with me – especially the scenes that were more staged and involved lots of gear. It offered a shared space for us to be excited about the same thing and get to see different sides of each other, challenge new obstacles together that were about creating something, as opposed to just surviving. The whole process of the last six years has brought us all so much closer.

Filmmaker: The film’s non-linear approach – you even end with the beginning – is quite striking. So what was the editing process like? How did you map out the scenes?

Minax: Most of the filmmaking was the editing. It’s my favorite part, and I’m usually doing sound design while I’m in the edit. I can’t really separate the sound from the visual. The edit was like throwing a five million-piece puzzle out onto a table and trying to put it together.

I edited on and off throughout all of the filming – editing, then shooting more, then editing more, shooting more, etc. Then edited pretty much nonstop for a solid year. (The only good thing I can say about the pandemic was that I had a lot of time to edit.) I tried a few different approaches to scene mapping, but at the end of the day the best approach for me is just to play – a lot. There are a million different ways to cut the same film. Luckily the only thing that was a solid guiding post was the fact that the film unfolds ultimately over six years, so some things simply have to be linear. The year markers served as guideposts. Also the VO, because for it to be cohesive the VO had to be parceled out at semi-equidistant intervals. In general I’m doing kind of a juggle or tradeoff, where content (events and semi-linear experiences) and meta-content (thoughts about the world) weave in and out of each other. The connective tissues for the weaving exist in the footage already, so I didn’t have to stretch too hard to find those.

Filmmaker: North By Current feels a lot like an exorcism – you even say as much when you confront your mom towards the end – but exorcisms can cause damage. Did you worry that your desire to film might be doing a lot more harm than good – especially with regards to your sister who’s in such a precarious state throughout?

Minax: Good question. I was very careful with how and when I filmed. I put the camera down a lot. There are many events that transpired over the years of filmmaking that might have made for juicy content, but the camera was my last thought during those moments.

So while the film appears to be very raw and revealing (which it is), privacy was always in consideration. The approach to filming was constantly shifting based on what was happening, how everyone was feeling too. There were some shoots where I only shot maybe an hour total of footage. And emotional health was a big part of how and when I did the more intense interviews. For example, my sister is not present in discussing Kalla’s death in the first half of the film for explicit reasons. I did not want her to have to talk about it again. This is also how my character really developed. Because ultimately my sister and brother-in-law were only available for this intense emotional labor to a certain degree – the degree to which it was liberating and not re-traumatizing. I learned this very quickly into filming.

I also structured the interviews as short and frequent, as opposed to long intense conversations. We rarely interviewed for more than an hour at a time, and all of the interviews were only me and my family. I only had one extra person meet my family during the entire process, who is a dear friend (and DP). All that is to say, our internal process as a family was my number one priority.

Filmmaker: So how does your family feel about the film, especially now that it’s being seen by the general public?

Minax: My parents really love it – which feels amazing. Especially because they’ve never liked anything else I’ve made. (Ha.) They didn’t even mind my friend’s collaged dick shot. I think they really appreciate the nuance that I bring to the table, and the space that gets held for diverging understandings of the world. My mom thought it was sad, but was really excited about the form. How it wasn’t like a “normal documentary.” I think they also understand the film as a sort of ancestral honoring, with all of the archival of their parents and grandparents. I understand it that way too. And also just a gesture of care. Which it is.

My sister is not ready to see it yet. She’s expressed the fact that it might make her sad, which it undoubtedly will. I think she’ll need a few more years before she’s really ready to watch it. But whenever she’s ready I’m excited for her thoughts.