“I’m Drawn to Spaces Where the Paradoxes of Everyday Life are Made Apparent”: Jessica Kingdon on her Tribeca-Premiering Ascension 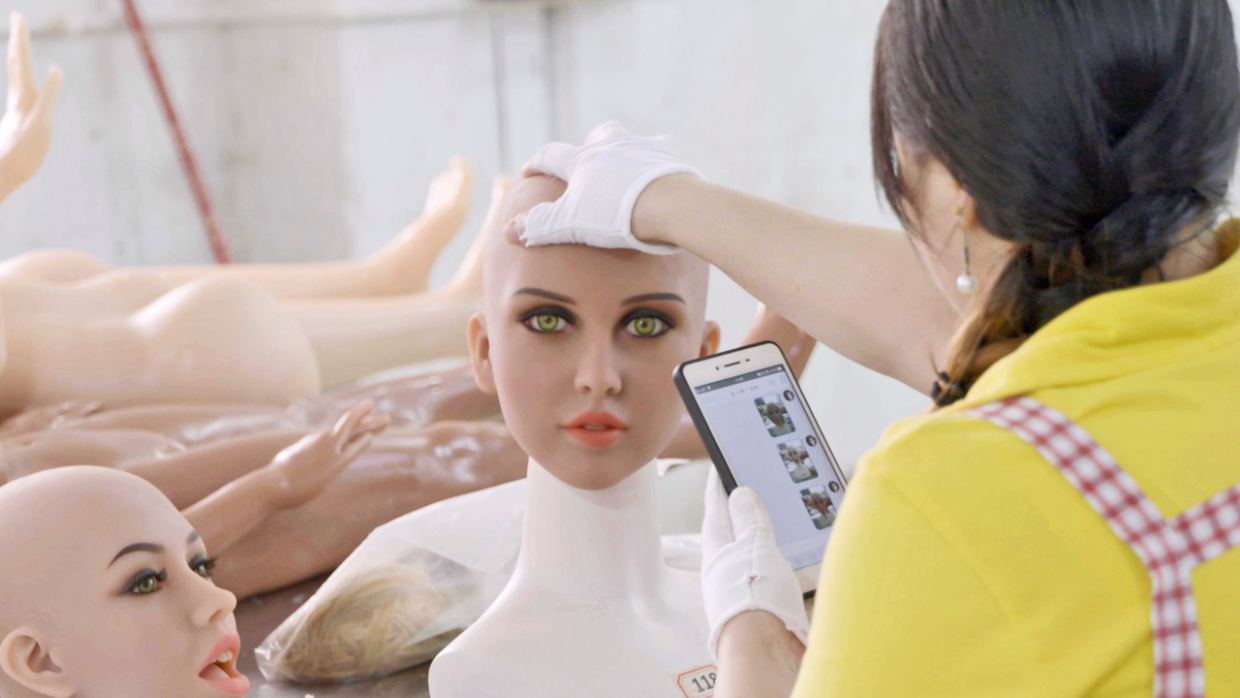 An all-female factory floor that manufactures made-to-order sex dolls (which seems every bit as titillating as crafting car parts). A workshop featuring a social media entrepreneur who rhapsodizes about the “fan economy.” (Why be a regular boss when you can be a “star boss”?) An instructor in a class on business etiquette quizzing the Stepford Wives-creepy assemblage on how many teeth should be displayed when smiling at a client. (The correct answer? The “upper eight teeth.”) A dinner conversation in which the wealthy discuss the pros and cons of vacationing in Xinjiang. These are just a few of the unnerving glimpses inside today’s China captured through beautifully composed shots and a hauntingly discordant sound design in Ascension, the latest from Jessica Kingdon (a “25 New Face”of 2017).

Equally unnerving, however, is that Kingdon’s doc likewise manages to be a disturbing reflection of the West as well, as the capitalist and consumerist values we’ve enthusiastically exported over decades have transformed the very countries we were hoping to influence – albeit not in the intended democratic post-Cold War way. Which seems to be precisely what Kingdon is intending to show. Though the filmmaker has created a portrait of China’s gaping class divide — “ascending” its rungs of capitalism from low-wage worker, to middle-class dreamer, to the disconnected bubble of the elite — she is also exposing a dangerously unsustainable system. One that feels not faraway at all, but far too close to home.

So to learn all about “Chinese Dream” aspiration (and its dire repercussions), Filmmaker reached out to the Chinese-American director/producer just prior to the film’s world premiere in the Documentary Competition at this year’s Tribeca Film Festival. The film is currently streaming on Tribeca’s virtual festival platform.

Filmmaker: So how exactly did you get access to all these different spaces? And why were you even permitted to film (or were you)?

Kingdon: We shot in 51 locations in China, and each location has a different story as far as how we attained access. But in short, for the most part we were not filming any explicitly political content or filming in “sensitive” areas that would cause alarm. We were transparent and tried to explain as clearly as possible the intentions for this documentary. Of course, making this type of freeform exploratory film, it’s difficult to put into words what exactly we were doing in the first place. Often people did not know what to make of us. When more funding came through we were able to work with several “fixers,” who are fantastic at their jobs (like Maggie Li, Jack Zhang, and Max Zhang).

I was surprised to find that, despite the contentious status of China-US relations, my being American still held some type of value, which helped me get access to some locations. One woman allowed me to film a seminar for an entrepreneurial workshop she was teaching. When I arrived at her class, to my dismay, she commanded me to hand out trophies to each of the students, accompanied by a personalized speech I had to make on the spot — as if my purpose there were to confer honor upon each of them. I found that in China the expectations around who wields the power in these types of situations are often unpredictable.

One man was skeptical about letting us film in his factory because he was worried that upon our departure we would send him a bill for appearing in our documentary. Our fixer had to convince him that we were not going to charge him. In another situation, the CEO of a plastic water bottle recycling company became convinced we were corporate spies because of the way we were shooting (slow, observational). He called us into his office, invited us in for “tea,” which wasn’t a good sign. After two days of seeing us point our cameras at the same thing he asked angrily, “If this is a documentary then where is your host?” Luckily, our fixer was able to sufficiently convince the CEO that we were clearly not capable or smart enough to be stealing tech secrets.

Filmmaker: Ascension actually seems to be an extension of your previous short-format work. Was this always intended to be a feature?

Kingdon: Initially I thought I would be making a trilogy. The idea was to make three shorts that traced the cycle of production, consumption and waste. As I was pitching it alongside producer Kira Simon-Kennedy during the 2017 Spotlight on Documentary IFP Film Week, we found that it was difficult to get funding for a series with a more experimental tone. In one of the meetings someone asked us why we weren’t just making a feature. I realized that that was what I wanted to do all along, but just didn’t think I could actually make a feature in this way. But it got me excited, and so that’s how the idea was born. Of course the concept changed while we were shooting, veering away from a study of waste and pollution and more towards the new type of aspiration that is happening in China today.

Filmmaker: Though the film focuses on China, it’s very much an indictment of the Western values — capitalism, consumerism — that we’ve exported (and that China has adopted and put on steroids). China as a funhouse mirror for America. Since you’ve long been exploring consumerism and mass production, what continues to draw you to these subjects?

Kingdon: I think I’m drawn to spaces where the paradoxes of everyday life are made apparent, and nowhere are contradictions as magnified as in marketplaces and factories in contemporary China. I find people more easily recognize the conditions of absurdity within their own lives when experienced in a new context.

I am not trying to offer answers about the moral value of China’s system, but to draw attention to the universal aspects of industrial production and consumption – and ask who is benefiting from these systems, and to what end are they operating. A larger question I am interested in is how societies organize themselves and determine values, and what matters in life. I’m curious about the accelerating pace of technological advancements — to what end are we working towards? China has experienced a so-called “economic miracle” in the past few decades that’s affected the entire world. So I wanted to put a magnifying glass to the inner workings of what that looks like. What does a cryptocurrency mine sound like as it whirs in a remote warehouse? What does the plastic smell like as it is molded into the shape of a body? These were things I was curious about — the physicality of the supply chain we are all a part of. My hope with this film is for people to see themselves within the supply chain itself, not as disconnected from it. We’re all part of the same system. Consumers using laptops and miners digging up rare earths to power batteries — we are all part of the same chain.

Filmmaker: The sound design is also incredibly evocative. How did this aspect develop, and what were you hoping to achieve with it?

Kingdon: I’m glad you think so! One of the most important things was getting a visceral, sensory feel of what it’s like to work in the factories. We lav’d people working in factories as much as we could in order to get first-person sound. One of my favorite sound moments is when the young woman on the water bottle assembly line pauses to take a sip from her portable thermos. You can hear her unscrewing the lid. She didn’t say a word while we were filming, but I’m so glad we kept the lav on her anyway because that sound was essential to me.

Then there is the moment of those ladies’ shoes pumping the pedals in the plastic bottle cap factory. First, their shoes are so fashionable; and second, I love the idea that they are powering the hissing rhythm we’re hearing, which initially we don’t realize. A lot of this was about drawing contradictions out within a frame because we’re in this sterile plastic manufacturing factory and yet we’re experiencing all this life and intimacy. My sound designer Gisela Fulla Silvestre was fantastic at helping me identify and amplify the sounds that we thought should be brought out.

Also, while shooting in factories, we noticed the rich soundscapes and realized they should be incorporated into the score. So my co-DP (and producer and husband-to-be) Nate Truesdell and I tried to get clean audio of the distinct elements within factories. Through some crazy form of alchemy I don’t understand, our composer Dan Deacon used these sounds to transform them into something really special and otherworldly. He used so many techniques. One was to transcribe the arhythmic beeps of the broken bikes in the bicycle graveyard and translate that to the music. That was so cool. When scoring scenes he would think of the factory sounds as part of the score, and the two would work in tandem.

Filmmaker: So what are the biggest challenges when it comes to shooting in China, especially as an outsider?

Kingdon: Journalists and artists in China are constantly reconfiguring their sense of how far they can push it before the CCP deems something too threatening or disruptive to the social order. When shooting there was always an invisible line we had to make sure not to cross. However, it’s difficult to explain exactly what this is because its boundaries are always shifting. It’s a delicate dance people do.

Also, as an outsider, people were always trying to present a polished image of what was in front of the camera. Instead of trying to fight against this, trying to get something more “authentic,” I tried to use it. In a sense, at least part of this film is a reflection of what the people we filmed with would want an international audience to see.