Jim Hemphill’s Home Video Recommendations: Last Train from Gun Hill, There was a crooked man…, Stranger on the Run and In the Line of Fire 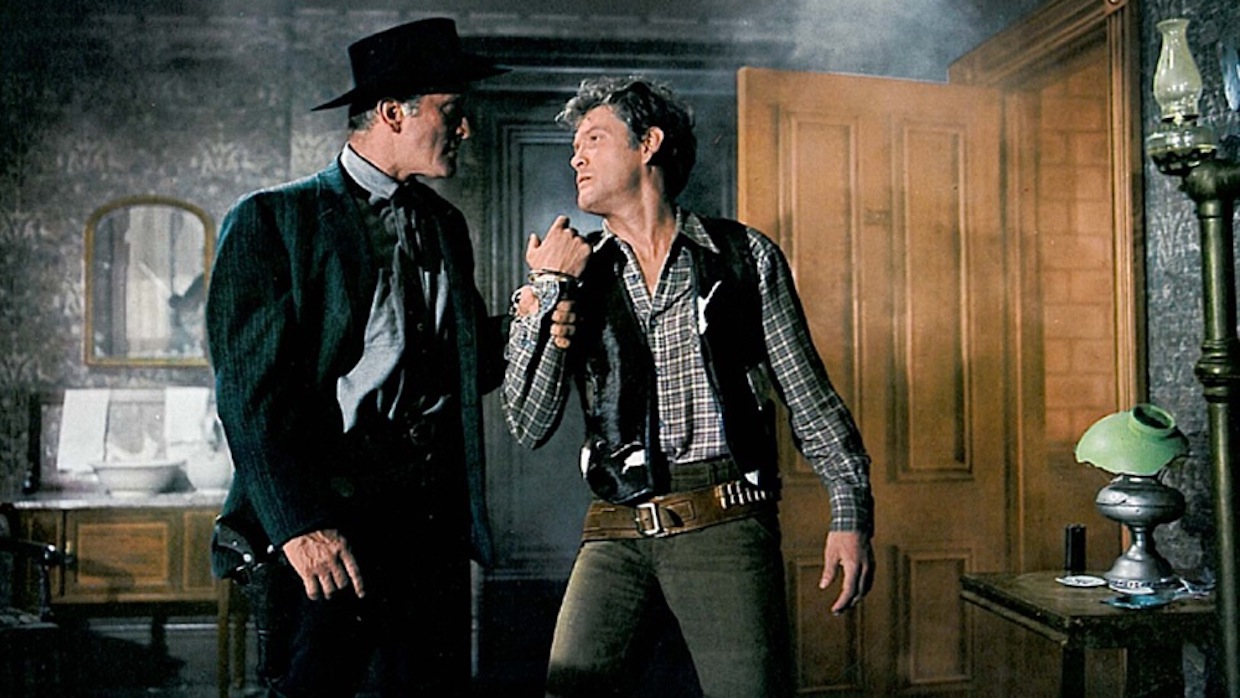 In the Line of Fire, Last Train from Gun Hill, Stranger on the Run, There was a crooked man...

Actor Kirk Douglas was at the top of his game when he reunited with producer Hal Wallis, director John Sturges and most of the rest of his Gunfight at the OK Corral team for Last Train from Gun Hill, a dark and absorbing 1959 Western that stands tall as a worthy companion to Douglas’s other great achievements of the era like Lust for Life, Paths of Glory, Strangers When We Meet and Spartacus. As those titles illustrate, this was a period when Douglas used his box office capital to make one interesting and ambitious picture after another, and Last Train from Gun Hill is a case in point: a brooding, challenging and captivating morality play in which Douglas sets out to avenge the rape and murder of his Native American wife by the son of his best friend (Anthony Quinn, reuniting with Douglas here after Lust for Life). The self-effacing Sturges tamps down the premise’s more melodramatic implications, going for understatement at every turn and giving his film far more emotional power as a result; the audience has to lean in and actively participate in the questions the movie raises, giving Last Train from Gun Hill an impressive hypnotic quality. Yet for all the film’s dramatic subtlety, it’s a visual knockout thanks to cinematographer Charles Lang’s spectacular VistaVision images; taking full advantage of the format’s increased resolution and dynamic range, he supplies one gorgeously expansive panorama after another. That said, even here Sturges goes against the grain of what one might expect, shooting his vistas at odd angles that infuse them with a sense of unease, and alternating the landscape shots with some of the most claustrophobic interiors and shadow-drenched close-ups this side of East of Eden. I’ve long felt (and have mentioned in this column before) that VistaVision was the best of the widescreen processes introduced in the 1950s to compete with television, and its assets as both a capture medium and a source material for digital formats are on full display in Paramount’s new Blu-ray presentation of Last Train From Gun Hill. Remastered via a 6K transfer taken from the original negative, it looks and sounds as good as any home video release of a classic film that I’ve seen this year.

Kirk Douglas also stars in the delightful 1970 Western comedy There was a crooked man…, the penultimate film by director Joseph L. Mankiewicz, which makes its Blu-ray debut on the Warner Archive label. This time around Douglas is in jauntier form than in Last Train, playing a charismatic thief incarcerated at an Arizona prison run by new warden Henry Fonda. Both actors are in fine form playing to their strengths, with Douglas at his most rakishly charming and Fonda recalling the righteousness of his earlier Western heroes, and Mankiewicz brings a seasoned pro’s sense of compositional flair to the widescreen action. Yet for all the old school experience in front of and behind the camera, There was a crooked man… is far from a dusty nostalgia piece; while Mankiewicz is best known for the witty pictures he wrote as well as directed (All About Eve, A Letter to Three Wives, etc.), here he’s working with then hot young scripters Robert Benton and David Newman (Bonnie and Clyde, What’s Up Doc), whose hip, sardonic sensibilities beautifully counter and enliven Mankiewicz’s more traditional rhythms.

Incidentally, another fine late period Henry Fonda vehicle, Don Siegel’s 1967 TV movie Stranger on the Run, is newly available on Blu-ray from Kino Lorber and is quite interesting in its deconstruction of the Fonda persona—it’s clear from the actor’s introduction, in which he is kicked off a train in a state of severe vagrancy, that Fonda is no longer in his Abraham Lincoln or Tom Joad mode. (The following year he would obliterate his upstanding image completely in Sergio Leone’s Once Upon a Time in the West.) Playing a stranger in a railroad company town who is falsely accused of murder, Fonda engages in a series of offbeat, intense interactions with a remarkable ensemble of sturdy character actors that includes Dan Duryea, Sal Mineo, and—best of all—Michael Parks as a morally ambiguous sheriff; all of their verbal and physical altercations are directed for maximum terse impact by the always reliable Siegel.

Siegel protégé Clint Eastwood stars in my final recommendation of the week, Sony’s 4K upgrade of the 1993 thriller In the Line of Fire. Released on the heels of Eastwood’s artistic and commercial triumph with Unforgiven, In the Line of Fire is a rare post-1980s Clint vehicle with another director guiding his performance—in this case, Das Boot auteur Wolfgang Petersen, whose European visual sensibility perfectly complements Jeff Maguire’s classically proportioned script. Eastwood plays a secret service agent who was on duty the day President Kennedy was shot and has been haunted by his failure to protect his boss ever since; John Malkovich is a disgruntled CIA operative who gives Eastwood a chance at redemption when he targets the current president for assassination. Maguire deftly balances his structure by alternating large scale action sequences with intimate dialogue scenes between Eastwood and Malkovich, who spend a surprising percentage of the movie on the phone; it’s a testament to both the literate, philosophical quality of Maguire’s script and the actors’ magnetism that the talky scenes are as riveting as the elaborately choreographed violence. Working with ace cinematographer John Bailey, whose anamorphic frames are filled with texture and detail, Petersen exhibits a command of spatial relationships and movement within the frame that was rare in 1993 and is even more scarce now—and thus, more valuable. Relieved of his usual responsibility for the entire picture, Eastwood is at his lightest and most engaging, and Malkovich provides the pleasures of a scenery-chewing showoff while keeping his villain tethered to an effective and affecting reality. Both actors (and a stellar supporting cast that includes Rene Russo, John Mahoney and Dylan McDermott) are beautifully served by Bailey’s Edward Hopper-inspired lighting, which plunges the deeply troubled men into contrasts between light and dark in which the shadows are physical manifestations of the spiritual conflicts raging within the characters. It makes a great double feature with Last Train from Gun Hill; both movies are thoughtful entertainments for adults that offer clinics in how to find visual corollaries for their characters’ troubled psychological states.