“The Whole Impetus for Queer Comics is to Make our Lives Visible”: Vivian Kleiman on Tribeca World-Premiering No Straight Lines: The Rise of Queer Comics 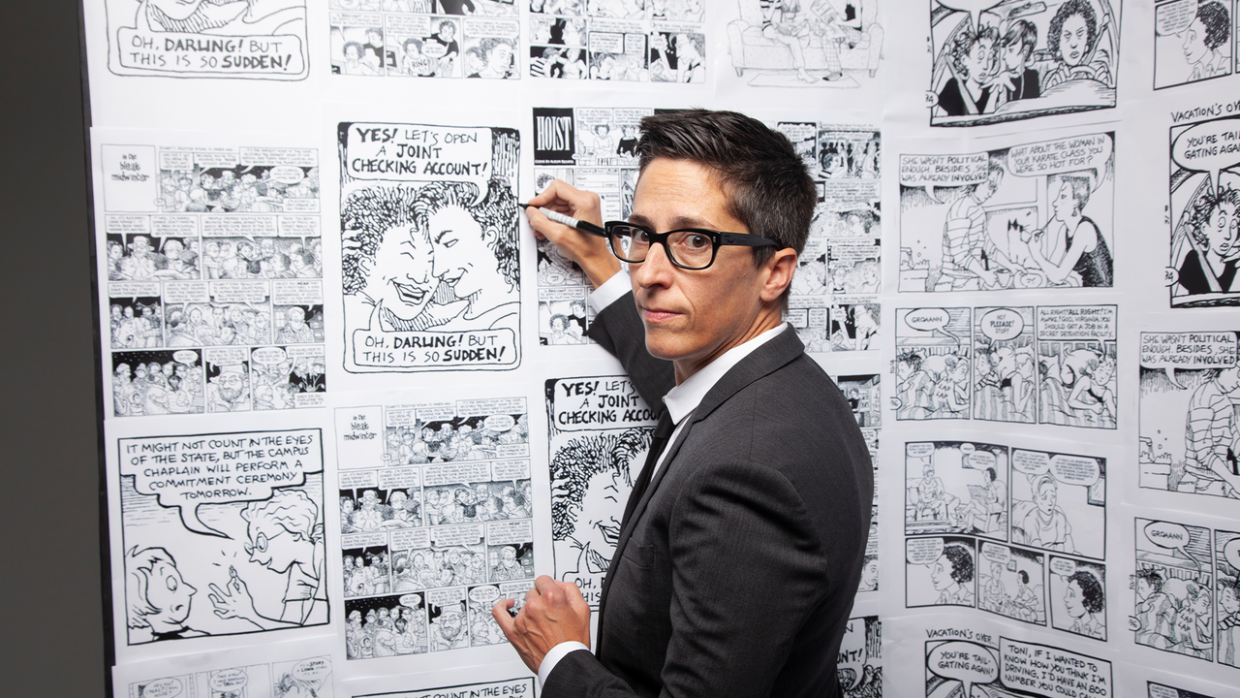 No Straight Lines: The Rise of Queer Comics

Directed and produced by Vivian Kleiman, Tribeca premiere No Straight Lines: The Rise of Queer Comics provides a glimpse into the lives and works of comic artists Alison Bechdel, Rupert Kinnard, Mary Wings, Howard Cruse, and Jennifer Camper, who were integral to the development of the first queer comics in the underground comic scene. Kleiman does a phenomenal job in placing the vibrant energies of the pioneering artists in dialogue with younger artists while framing their comic works within the larger context of intersectional identities and the history of the LGBT community.

When asked about the creative influences that shaped No Straight Lines and her other works, Kleiman spoke about the impact that her close friend, and artistic collaborator, the late Marlon T. Riggs, continues to have on her creative process, particularly in her decision to engage with non-linear storytelling. Additionally, it was Riggs who initially introduced Kleiman to one of No Straight Lines‘s subjects, featured cartoonist Rupert Kinnard.

A film that evokes laughter with the timeless humor of queer comics while engaging as well with the AIDS crisis and other elements of historical LGBT political oppression, No Straight Lines succeeds in blending history with narrative, ultimately doing justice to the rich history of queer comics.

Filmmaker: No Straight Lines: The Rise of Queer Comics covers 40 years of queer comic history. How did you ultimately decide who to feature and what material to include?

Kleiman: I knew that I did not want to create an encyclopedia of who did what and when — that’s tedious. I wanted to profile a selection of individuals so that the viewer would have an emotional connection with them as individuals and not just as names on the screen. I set a limit of five people that I would focus on, and to make the final decision of who was going to be profiled I turned to my colleague, Justin Hall, who is an expert in the subject as a historian of queer comics — [he] edited the first anthology of queer comics called No Straight Lines.

Once I had an assembly of the first rough cut, I looked at it and it felt stale. It didn’t have a dynamic connection with young people. I came up with an experiment to include what I refer to as my “Greek chorus”: snippets from young people, young artists, young queer artists. It infused the piece with the vitality that was missing before and a connection with my intended audience. I did this film for young queer people today in the US. I did it because I wished that there had been a film like this when I was struggling to come out. I know that there are still young people out there today who are struggling with self-acceptance, and the whole impetus for queer comics is to make our lives visible. I wanted to show a generation of people who struggled and found a way for [self] expression and a way to triumph over the personal obstacles that they were facing in their lives.

I really didn’t think it would have any appeal to international audiences, and one of the joys of being a documentary filmmaker is sometimes being found to be wrong. I was just really stunned that the film was so well received by programmers.

Filmmaker: How do you maintain your own artistic authenticity and roots in this film?

Kleiman: I was raised in an Orthodox Jewish home, and I was trained in studying religious texts and analytic thinking. The main influence is Marlon [T. Riggs], and that was even to the extent in [No Straight Lines] with Rupert Kinnard, who I knew before his accident because he was a close friend of Marlon. One of the things I learned from [Riggs’s] Tongues Untied (1989) is that one can tell a story in a nonlinear manner if you can trust your audience to follow. You don’t have to have a three-act structure. You don’t have to tell four decades of queer history chronologically. You can toss things up and work hard to tell the narratives that resonate on an emotional level.

Filmmaker: How did working on No Straight Lines: The Rise of Queer Comics amid COVID-19 impact your process?

Kleiman: Having a project be in post-production under COVID was really therapeutic. I was able to stay focused. We work remotely with my editor who is located in southern France, so the only thing that mattered was the time difference. It becomes a little difficult when you’re shaving off a few things here and there, that process got slowed down by COVID.

At the same time, the content shifted. Pre-COVID, I was very dedicated to the notion of not including any erotica, [and] keeping it focused on more literary kinds of comics. It was kind of unconscious, but I realized afterward when I was doing the sound mix that I actually had allowed much more explicit content to enter into the film than I would have otherwise. It felt like I became slightly more uncensored, perhaps thinking less about distribution and more thinking about a film that represents the range of queer comics in the broadest sense, [and] that includes some erotica. That was a huge impact of COVID.

Filmmaker: What is your connection to the queer comics in your life?

Kleiman: I grew up in the ’80s waiting with bated breath for Alison Bechdel’s latest serialized comic to appear in the local feminist newspaper “Plexus” in the Bay Area. Those stories we all just hung on to each character, each story, because it was the first time we were seeing ourselves represented. It was funny, it was poignant, it was about a bad hair day [or] trying to get a job and being butch. It was about race, it was about politics, it was the whole chaos jumble of our lives. So that was very impactful for me.