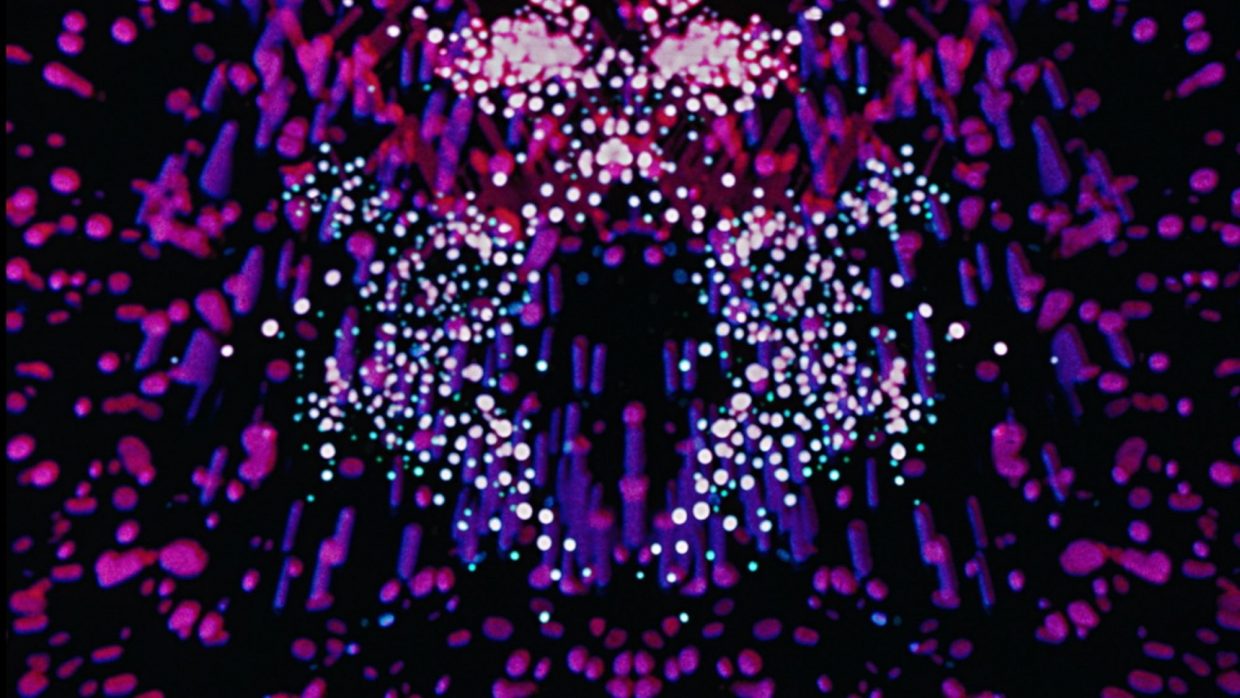 by Daniel Eagan
in Directors, Festivals & Events, Interviews
on Jun 23, 2021

Working primarily with a hand-wound 16mm Bolex, Neelon Crawford made a series of experimental films from 1968 through 1980. Shot in the US, the United Kingdom, and South America, the films explored light and movement in a variety of landscapes. Crawford manipulated the image through film stocks, filters, frame rates, double- and triple-exposures, animation, editing, and printing, at times adding soundtracks to imagery that ranged from observational to abstract.

Crawford’s films were featured in the Museum of Modern Art’s Cineprobe series in the 1970s and were distributed by Canyon Cinema, among others. After For the Spider Woman in 1980, he withdrew from film to concentrate on photography and painting. MoMA acquired his elements and prints in 2016, overseeing their restoration. Ron Magliozzi, Curator, and Brittany Shaw, Curatorial Assistant, Department of Film, organized a series of three programs of Crawford’s work which ends tomorrow in the Museum’s Virtual Cinema. Opening July 24 through Spring, 2022, the museum’s Neelon Crawford: Filmmaker gallery exhibition will highlight 8 of these restored films.

Filmmaker: What led you to start making films?

Crawford: My father [Ralston Crawford] was a major American painter and photographer print maker. So I knew about how to make photographs since I was eight years old. At Antioch College I ended up in the art department. I was drawn to stained glass windows, which I had seen on trips to Europe with my family. Not traditional religious imagery, but contemporary designs. I liked the idea of moving light, which caused the images to change.

At Antioch there was quite a bit of interest in experimental or avant-garde cinema, the idea of nonlinear, visual movies that were like paintings. I would point to Bruce Baillie’s Castro Street in particular. I thought, here’s how I can marry what I was doing with stained glass and the movement of light with what I was already very familiar with in still photography.

The art department didn’t offer filmmaking, so we got some cameras and film and editing equipment, and we ran with it. In sculpture class I built an eight foot cube that I lined with mirrors, and started shooting photographs with it. The first film I shot, Freakquently, was in that mirrored cube.

Filmmaker: Freakquently doesn’t follow any of the established “rules” of filmmaking.

Crawford: I don’t think this is a unique realization, but you know, you can do anything with film, just like you can do anything with writing. Time, visuals, all the still photography techniques: it was wide open. I was interested in the idea of breaking the shackles of theater being presented as moving pictures, you know, transitioning from the stage to the screen. I was also intrigued with controlling time. Someone walks through a museum and looks at a painting on the wall. They might stop for 10 seconds if they really are interested. They might not stop at all. They might stop for 15 seconds and read the label. So I played with the idea of making a two-minute-long movie that explored a single subject.

Filmmaker: But even when you’re making “single subject” films, like Skyjacker or Paths of Fire II, the imagery can be overwhelmingly dense.

Crawford: That can be intentional or by accident. Skyjacker was mostly animated from 35mm slides. I was flirting with flash editing and superimposed images and single frame shooting. If you look at Light Pleasures, which is early seventies, if you have a high-contrast, black-and-white close-up of a ripple on a fast moving creek, each frame is different. You put in, say three frames of black leader and then put in six frames then put in one frame and then 13 frames of black leader, and then two frames. With the optics of your eye, what happens is there is an afterimage on your retina which is not on the black leader. If you get the timing, you hit the eye with this flash of one or two frames and then put six frames of black behind it and you’re gonna see stuff in your eye that’s not in the film. That was a very conscious effort.

If you don’t put in any black leader, but put some kind of strobing, like in Window Dance, which is done with edits, you’re going to see something that may or may not be in the actual film.

Paths of Fire II is another film where I very aggressively wandered back and forth between soothing and overload.

Filmmaker: Can you explain a bit more about that film? I’m not sure how you achieved that imagery.

Crawford: In 1969 I went out to the Bay area and got a job as a printer in a film lab in San Francisco. Before I left Ohio, I said to my friend Michael Mideke, “Let’s go shoot the fireworks.” We each shot I think a hundred-foot roll, maybe a little more. We started editing it separately, he was down in central California where he was a caretaker on a ranch.

Michael would send me edits and I would take the hundred feet and send it through the lab for a one-light work print. Then I would send it through a Bell & Howell J contact printer ten times. And so on, back and forth. We generated thousands of feet of variance from the original couple of cameras. You couldn’t do it now without very expensive optical printing.

Filmmaker: You mentioned Michael Mideke. What other filmmakers did you pay attention to at the time?

Crawford: Brakhage’s Mothlight, that felt brilliant. I met Nate Dorsky in the late sixties. One of my favorite films is his Summerwind, it’s like a perfectly rung gong. He’s still a good friend of mine. Another dear friend is Pat O’Neill [The Decay of Fiction].

Filmmaker: Although the imagery in Castro Street can be abstract, Baillie still had a narrative in mind when he made it. Do you work in a similar way?

Crawford: It’s going to be a different answer for different films. If you look at Window Dance, I was in London. It’s 1971, I was headed for South America, but I learned my father collapsed in a hospital in London. I’m dealing with this tumultuous event, wondering what’s going to happen, and wandering around London with a Bolex. I met a woman on a bench whose boyfriend is a Japanese modern dancer. We met the next day. The whole idea of a painting or a photograph or a movie frame being both a window and a surface in various proportions — it’s always both, if it’s Charles Sheeler or Paul Strand, it’s an equal balance. You can get very abstract images that are essentially all surface. So that’s what Window Dance is about. That film is shot with a very specific idea of a window’s surface. It was totally spontaneous. He made up all of the dance parts, I did all of the shooting. So that’s an example of very unpremeditated effort with a very specific set of resources and tools in one day.

Other situations like Needle at Sea Bottom, I shot this bronze Sphinx in London in 1971. Maybe a year later I drove across the United States, through the Nebraska grasslands and so on. Through intercutting I explored the idea of this Sphinx looking out across open space. That was not visible to me when I was shooting, that was an idea that came to me at the editing table in San Francisco. “Gee, I wonder how I could do that?”

Filmmaker: With a film like Lago Agrio Gas Burn, am I wrong thinking there is a narrative? When we’re watching something, aren’t we always struggling to make a narrative out of the images we’re seeing?

Crawford: The expectation when you sit down in a theater, the lights dim, the film starts, is you’re going to be told a narrative, right? I was swimming against that with the idea of moving paintings, which comes out of moving stained glass. If you splice two images together, it changes both of them. That can also be done with sound, without changing the visual edit at all.

So is there a narrative in Lago Agria Gas Burn? I would say basically no, but I am paying attention to pacing and energy. I am mixing in slow motion imagery, the cuts are not random. They’re intentional. The very last shots are sort of panning up against a darker background, and the flames sort of ease in the background, which lets you off the hook or eases you to the end. I’m very, very much more comfortable comparing it to audio and music, than words and narrative. The narrative doesn’t have to necessarily be words. It could just be energies.

Filmmaker: Were there instances where you imagined your footage was going to look a certain way and it came out another?

Crawford: There were certainly situations where a superimposition didn’t work and I would cut it out.

With Light Pleasures I was working with a very high-contrast print stock, 7302. Through trial and error a bunch of us figured out that if you put 7302 in a Bolex and exposed it as about ASA 2 or 3 and processed it as a reversal, you’d end up with some significant gray scale. Not like Plus X. There’s a really bright white leader.

Filmmaker: Can you talk about editing a single-subject film like Ship Side Steel Plate Lights?

Crawford: I’m sitting there with a Moviescop and rewinds, nowadays it’s like editing through a Coca-Cola bottle. It was always a wonderful thing to just look at the physical strip of film and be able to read the movement. I was often editing original, which is a commitment. I would think if I catch that movement in shot one and cut to movement in shot two, that’ll work. A movement might complete and then start back, say, one of the ripples. So if I cut out the six frames of starting back and grab this other frame with the same directionality of movement or an opposing movement, I can read that. At that level, it was intuitive, visual.

I think it’s important to emphasize that if I wanted to make newsreels or documentaries or theatrical films, I knew enough from my commercial involvement with location filming to understand what was involved. I’m not going to tell you what happened in Tokyo yesterday, I’m going to show you something that’s nonverbal. I’m not trying to solve the universe or change your political attitudes.

If I walk into a gallery or somebody’s studio, I’m always lusting after one of two reactions. Number one is: Wow, I never would have thought of that, totally alien to me, and there it is all done, beautifully framed. This total surprise, like being handed a piece of pecan pie. Or it might not be pleasant. It might be abrasive or confrontational.

The other reaction I’m after is I’ve got to get back to my studio and get to work. Energy, drive — even if it’s not my channel or my interest, I just want to get back to work.

If we can light a few sparks under somebody, “I can do that with my iPhone” or whatever, that would be the home run. An iPhone, or a Bolex — I don’t care what they’re using. It could be a pencil. But if I can do something that sets them going, maybe they’ll make something.