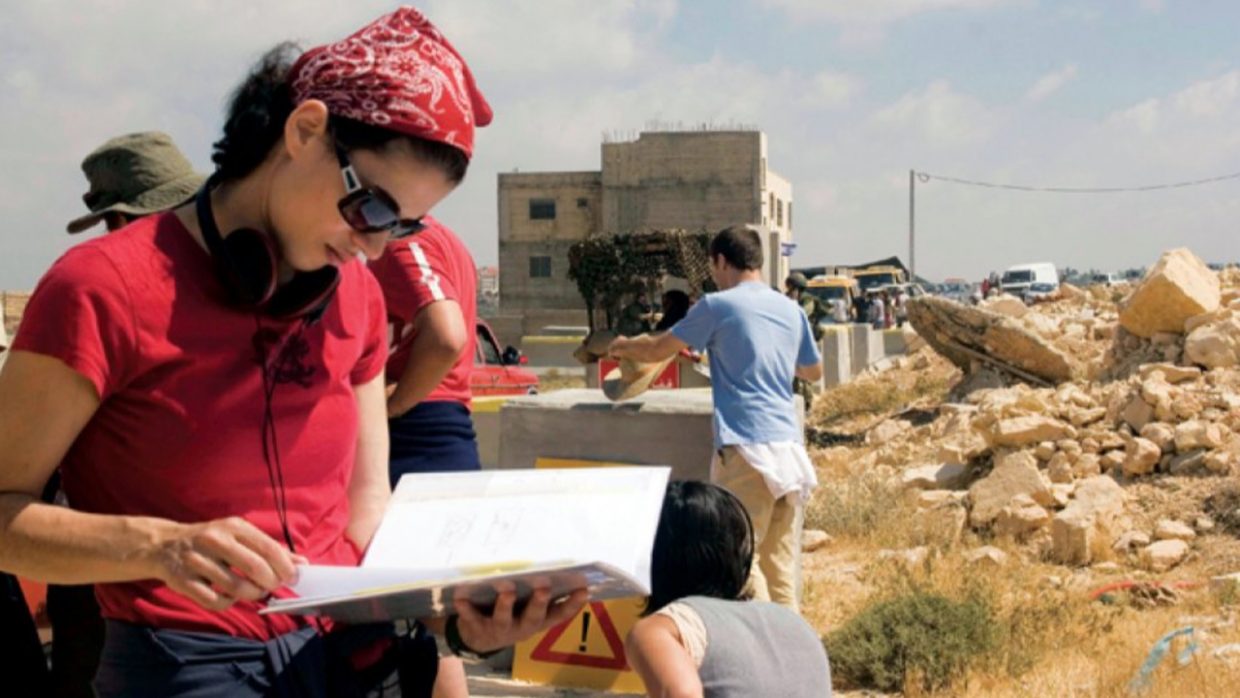 “Dad, I want to be a filmmaker,”  I pronounced at 12 years old, from our home in rural Ohio.

“You can’t be a filmmaker,” my father responded.  You’re Palestinian. No one will care what you have to say.”

I was shocked. You’re wrong, I said to myself, rejecting his statement outright. Yet his words have continued to haunt me.

My first memory of traveling to Palestine to visit our native village was when I was eight years old. Armed Israeli soldiers held my family at the border for 12 hours. They picked through the contents of our suitcases. My father shouted at them when they  ordered us all to be strip-searched, including my baby sisters, aged three and one. The soldiers shouted back at him. I was terrified that they would kill my dad. I keenly remember driving through Jerusalem after the ordeal, sticking my head out the window and thinking: This is what it means to be Palestinian. People don’t like us. And so they treat us badly.

During the 1991 Gulf War, my small midwestern town turned against my family.  My father, a physician, lost many patients. We received death threats in the mail. The secret service came to my school to investigate a ludicrous rumor that my 17-year-old sister had threatened to kill the president.

I became obsessed with trying to understand why this was happening. And  I started to notice  that when I watched TV, I never saw anyone who looked like my family. If we were there at all, we were lumped together as “Arabs”– oppressors, or oppressed women. The rare portrayal specifically of Palestinians had us wrapped in kuffiyehs throwing stones, or committing acts of terrorism.  Without knowing us, how could people understand, much less stop hating and mistreating us?   I picked up my parents’ video camera and started filming our trips back home to show to my friends. And I announced to my father my intention to become a filmmaker.

My entire career has toggled between fighting to prove my father wrong, while realizing time and again how right he really was.

I began writing what eventually became my first feature , Amreeka, while in film school in 2002.  In this early draft, the protagonist was an Arab-American highschooler navigating racism during the first Gulf War.

“How about the lead character place a bomb in her locker?”my professor pitched.

I was too stunned to respond. Did he assume that we all just automatically know how to build bombs? That Arabs have a proclivity to blow people up?  I shelved the screenplay for a year, and started making films about non-Arabs.

Other early-career experiences reinforced that protective self-censoring.  A colleague introduced me to an Israeli manager by saying:, “Cherien, you’re Palestinian. XX, you’re Israeli. Go!”  The conversation could no longer be about my work, but a tense exchange about Palestine/Israel.  While a staff writer on a television show, I got into a screaming match with a Zionist producer. I’m done, I decided. I can’t talk about this anymore. Not only was it exhausting to be met with anger and conflict whenever I tried to speak my truth, I began to fear losing my job, or future opportunities. Yet I had wanted to become a filmmaker to tell my community’s story. I was living with profound dissonance.

I began noticing troubling tendencies among fellow Palestinian artists. Some wanted to make their characters “palatable,” non-polarizing Arabs–Egyptian, perhaps. Others identified as “Arab-American” or leaned on their Jordanian citizenship.  I resolved to represent. If I wanted to stay at all true to the little girl who first picked up her parents’ camcorder, at the very least I needed to walk into any room in Hollywood and introduce myself, loudly and proudly, as Palestinian.

The more I navigated the filmmaking industry, the more Palestine felt like the last remaining taboo.  Fear, even shame, were pervasive.  Every Palestinian artist I knew–including me– had to ask ourselves: How radical am I willing to be in my art? If I don’t want to be labeled anti-semitic and blacklisted, what rules must I follow? How direct can I be about the occupation, let alone the Nakba – the ethnic cleansing of Palestinians from their homeland? I was inspired by Palestinian artists who pushed the boundaries, but realized that the more they pushed them, the more they ended up on the margins.

I slid on different parts of the self-silencing spectrum.  My first two feature films centered Palestinian characters; still, I was trying to be liked, and make “accessible,” non-political Palestinian drama-comedies. But I also knew that my films were inherently political, by virtue of the fact that the characters, and I, are Palestinian.  Multiple distributors and producers told me, “We don’t want to do anything political.” I began to understand this as code for: We don’t want to touch Palestine.

Amreeka premiered to critical acclaim at Sundance and was a New York Times Critics Pick, yet producers had told me the film was “too culturally specific” and mainstream distributors wouldn’t touch it.  My second film was also picked up by a small, niche distributor. My father’s words echoed in my mind.  But how could I isolate the combination of factors that led to my work being marginalized? Was it because I’m Arab? Palestinian specifically? A woman? Because my films have female leads and pass the Bechdel test? Did it have to do with what one colleague referred to as “Palestine fatigue?”

During talk-backs, I would try to avoid politics, “Why do your characters talk about Palestine? Palestine doesn’t exist,” I was asked. I tried to answer from the heart, without engaging politically.  “Palestine exists in the hearts and minds of millions of Palestinians, regardless of whether or not it’s on the map.”   And then, I tried to re-focus the conversation on the film itself.

The fear undergirding my self-censoring has long tentacles: Israel controls my ability to go home. I fantasize about living in Palestine, creating my art with the filmmaking community there, in the place where I feel most rooted. I’m terrified that Israel might deny me entry to my homeland, as has happened to so many others who have been outspoken. Who will  I be as an artist, if I can’t access the place that most inspires my art?

There’s a film I’ve wanted to make for a decade.  It’s an intergenerational family drama spanning from 1948 until today, revealing the ongoing dispossession of Palestinians since Israel was established. During quarantine, I finally found the time to write the screenplay.  It’s by far the most overtly political film I’ve written. I sat on  the script for three months, scared to share it. Finally, in early  April, I decided: I need to be brave. I sent it out.

And then, last month’s onslaught began. The disproportionate violence directed at Palestinians was not new. But the response was.  For the first time, producers, agents and colleagues emailed me that they hoped my family and friends were safe. News outlets and many members of Congress were finally recognizing that this is not a “conflict” between two equal sides, but settler-colonialism.  Something significant was shifting.

This shift is also reflected in how we as Palestinian artists are collectively breaking the fear barrier.  A Letter Against Apartheid published on May 26 is one such example. This isn’t the first sign-on letter disseminated to Palestinian artists, but more than 320 Palestinian signatories is unprecedented.  Equally heartening is the 16,000 non-Palestinians endorsing the letter; Academy Award and Pulitzer Prize winners among them–and many Jewish Americans. I feel relief, joy and hope as I scroll through the list. The names embolden us to demand authentic representation on-screen. The list gives us courage to speak our full truth, without needing to question exactly how much of it we can speak at any given moment in order to get financing.  The letter affirms: when we subvert our stories, we subvert our struggle. Palestinians deserve liberation; narrating our struggle brings us one step closer to achieving it.

Yet, when I scroll through the list again, I notice all the names that are missing. Why didn’t this producer sign? Why is that director’s name absent? Where are the colleagues who privately expressed support to me?  It’s not only Palestinians who are fearful to speak out.  I’m reminded of an American actress who told me she Tweeted in support of Gaza during the 2009 assault and received so much hate that, wracked with guilt, she deleted the Tweet.

But I know, beyond the shadow of a doubt: our silence–and the silence of the world–is complicity. It’s beyond time for us as Palestinian artists to be who we are, tell our stories, and speak our full, uncensored truths. And it’s long past time for artists around the world to have our back when we do it.

I will self-censor no longer. I’m starting with the film I began to send out in April. I’m excited to take my story out more widely, to package my truth with a cast, financing and producers. I think–I hope–the world is finally ready. If not, I’ll keep speaking out–loudly and proudly–until it is.