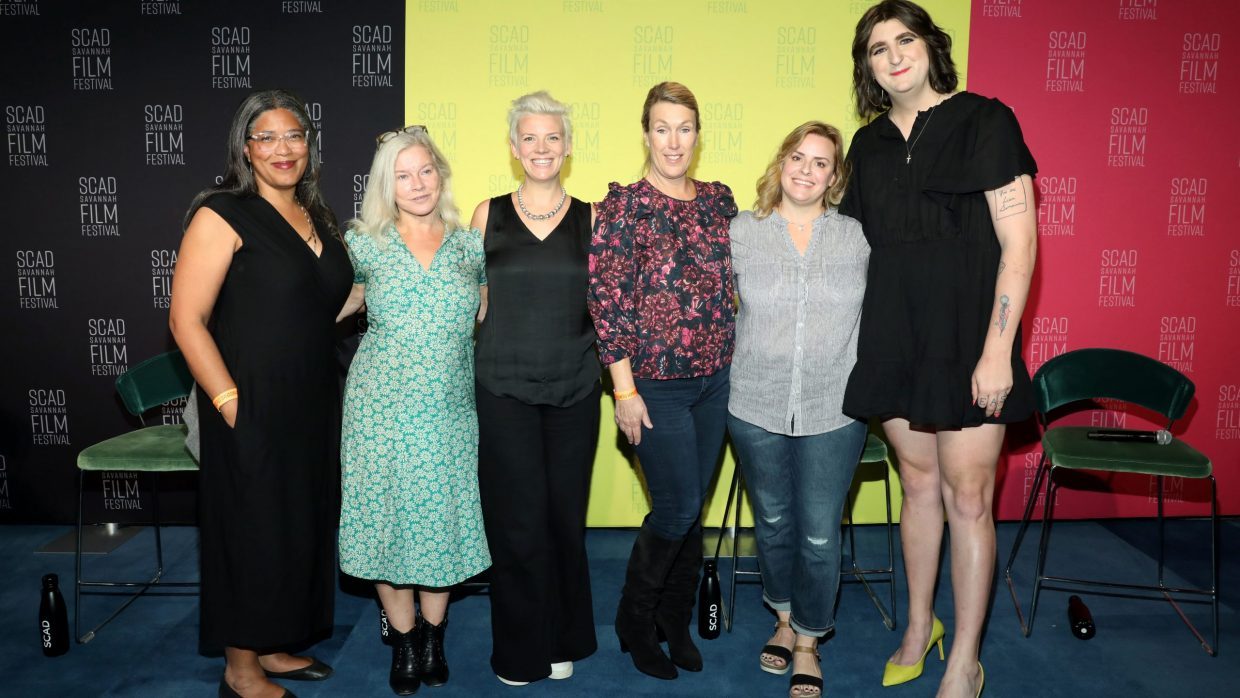 By way of introduction, Gipson asked the women to discuss how they’d made their way into producing. Owen, who began her career in 1992, really just wanted a job where she could read tons of books. Back then, with the advent of MTV and cable, there were so many new opportunities available. As for Winslow, she realized early on that she loved “protecting the flock” and nurturing ideas and also that she “needed power” to maintain control of her projects. York says she always wanted to produce; like many, an early job was in an agency mailroom. For Moore, after her Twitter account blew up, an agent signed her and she immediately started working, mostly on a lot of bad sitcoms before landing Dear White People. (She also didn’t recommend making a musical during a pandemic.) Spikes actually began at CBS in 1991.  The Morning Show was her first gig, and she has been with the company ever since.

Owen noted that she is more hands on with movies than with her TV projects. When she first started out it was a struggle to find funding for the female-centered films she wanted to pursue. She mentioned that Harlots, a pre-Me Too project, was particularly difficult — “nearly impossible” — to put together. At the time, sex workers either had to be “really sad” or “bouncing bosoms.” None of the (male) financiers understood why she wanted to depict them as regular women with normal lives. So when the all-female production finally aired the British producer described it as a “relief” just to see her own vision and experience reflected back at her. It was a sentiment that seemed to resonate deeply with the panel. Moore even touchingly thanked Owen for creating Harlots. As a former sex worker for a decade the series meant a lot to her. “NYU is expensive, y’all,” she added.

Winslow noted that she’d worked on The Lego Movie for six years resulting in Warner Brothers giving her an EP credit. (She is still the only person of any gender to have gotten one without working her way up from AP.) Producers are the ones risking their reputation for the writer and director, she emphasized. Winslow then reflected on shooting The Falconer in Oman – the first narrative feature to be filmed in the small nation, and her first as a co-director. She said that she wanted to tell the story “from” the country, not “about” the country, and added that reductionist thinking is an ongoing problem with westerners working overseas. To counteract bias it’s important to “consume content about people who don’t look like you or have your background,” and to “honor people who are doing badass work that are not like you.”

Winslow also set out to ensure that her team was diverse and from the Middle East, which had the unintended consequence of leaving her with an almost exclusively male crew. (Though her associate producer was one of the few female directors in the country.) The producer-director recalled the day when she looked around and realized she was the only woman on set — it had just “sneaked up” on her. “I don’t want to ever do that again,” she decided then and there.

For York, “knowing what the end product needs to be” is always on her mind. The streamers she collaborates with all have different needs. Regardless, she makes it a point to hire other women as often as she can and always tries to “be the best ally.” This includes adamantly having the backs of colleagues who are brave enough to speak up. She recalled once firing a grip that had inappropriately touched her first AD, stressing that he was only fired because the woman took the risk to even say something in the first place. “You have to speak up if change is to come,” the producer urged. (Which isn’t to say that all women are fighting for that necessary change. Winslow lamented having had a female mentor who actually expressed doubt that women — historically “nurturers” — could truly direct as well as men. It “shook (her) to the core.”)

Spikes felt fortunate that lots of women were already going up the ranks back when she began her career at the legendary broadcast giant. Today 60 Minutes actually boasts a predominantly female senior staff. That said, she still tries to both mentor women and to encourage other women to take up mentorship as well. “Practice advocating for yourself,” she pushed the audience of primarily SCAD students.

As for Moore, who will soon be running the Queer As Folk reboot and only learned how to produce because she had to, her message to novice producers was clear: Take whatever job you can get. The only way to refine one’s craft is to work, work, work. She also encouraged all creatives to “move beyond representation” — one of the hardest things to do. As an example she brought up gender and really “seeing a trans woman. I’m trans, by the way. I’m sure nobody can tell,” she added with her trademark timing. The producer then launched into a refreshingly honest critique of Pose. While she’s glad the series exists, she’s nevertheless dismayed that the characters seem to fall into the “wonderful woman” or “awful serial killer” binary tropes. She wondered, Where are our “messy middles?” Why do only straight cis people get the likes of Don Draper, Walter White, or Nurse Jackie? (A frustration the African American moderator readily expressed relating to, as Blacks have long had the “Magical Negro” stereotype to contend with.) She stressed that every character should be given the “dignity” of being messy and complicated. Diversity is not just a “box tick.”

Moore then recalled an incident during the first season of Dear White People in which she received a note from a white male exec, chastising her for being “too mean to white people.” Sex work had prepared her well for producing, she posited, and only half-jokingly. Having to meet people where they are or make them think it’s their idea — these were essential skills in both the sex industry and studio system. The job really boils down to “convincing them that they have a great idea — not that you have a great idea.”

She then brought up the tricky tight-wire act inherent in being trans in Hollywood. In addition to ego-fragile male executives, she’s had to deal with women in power who doubt her womanhood but still pay her lip service. Another note the producer received was a suggestion to bring in more queer female writers, as if her own experience wasn’t truly “authentic.” She’s long had to balance saying nothing with pushing back. Regarding her “kerfuffle” with Netflix over Dave Chappelle’s special, she noted that she “was in a career spot where I could say something” about transphobia. Producers have to know when “you are and aren’t in that position. You will feel justified, but you will be broke.”

Though as the only white writer on Dear White People she’s equally adamant that she can’t speak to the Black experience, but she does know what she doesn’t know, which is an element that is crucial to producing. “Fake it till you make it. Convince everybody you have the answer. But don’t fool yourself.” Words of wisdom not heeded enough.

Editor’s note: An earlier version of this article inaccurately stated that York spent years working as an agent. This has been corrected.