After the Curtain: The Tragedy of Macbeth Production Designer Stefan Dechant 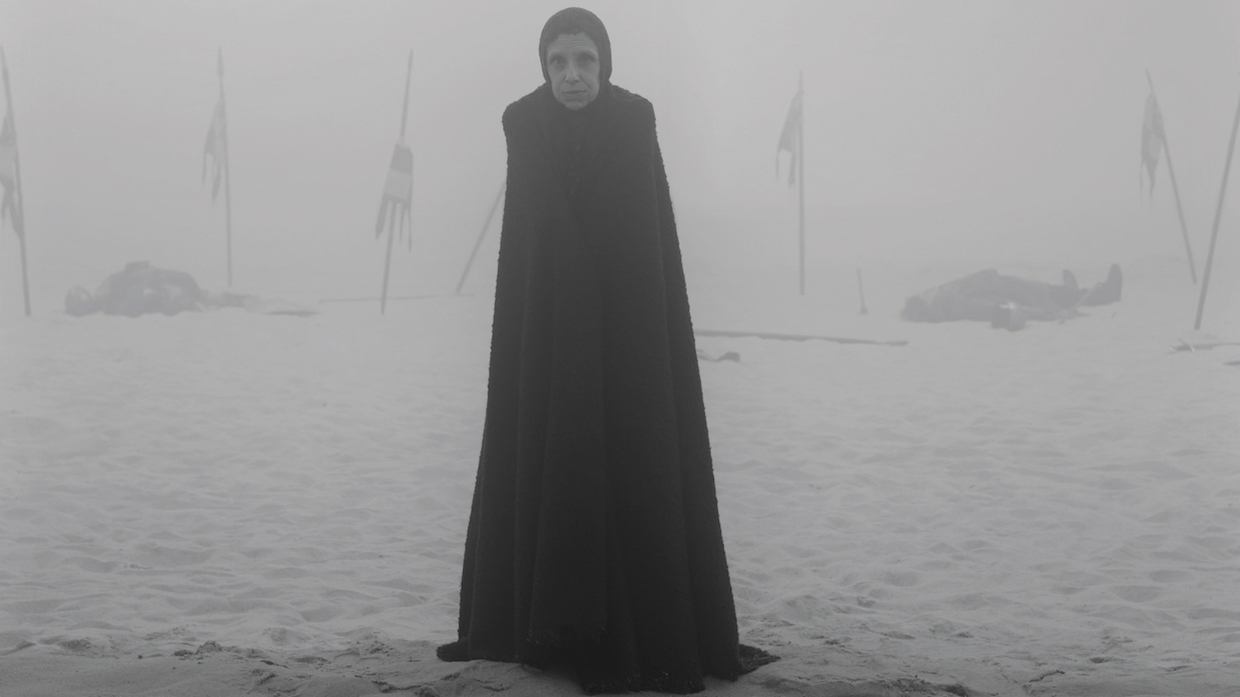 Kathryn Hunter in The Tragedy of Macbeth (courtesy of Apple TV+)

Shot by director of photography Bruno Delbonnel in stark black and white using the Academy aspect ratio, Joel Coen’s The Tragedy of Macbeth is an impressively lean (105 minutes total runtime) and stylized take. A reserved Denzel Washington stars in the title role alongside Coen’s wife Frances McDormand as Lady Macbeth, reprising a performance she gave for the Berkeley Repertory Theatre in 2016. In his first film without his brother Ethan, Coen eschews halfhearted attempts to “open up the text,” instead choosing to embrace its theatricality by filming the entire production on Warner Brothers’s soundstages in Burbank, California before and, after a brief pause, during the COVID-19 pandemic in the summer of 2020.

Given 10 weeks of prep time, production designer Stefan Dechant, known for his work in the art departments of films by Steven Spielberg and Robert Zemeckis (he production designed the latter’s Welcome to Marwen), was hired in part due to his work as art director on the Coens’s 2010’s True Grit. “I received the script the day before I met with Joel,” Dechant recalls. “In our meeting he said that he wanted to differentiate [his version] from any other. He didn’t want to ignore that the text was originally meant as a theatrical experience. The sets were to be minimally detailed.”

Describing the film’s visual identity, Coen referenced filmmakers Carl Theodor Dreyer and F. W. Murnau, especially the latter’s Sunrise (“when the husband and the lover meet by the lake and there’s all those tall grasses, [Joel] wanted a look like that”), and theater practitioner Edward Gordon Craig, presenting Dechant with 3×5 photographic prints that echoed the intended look. In addition to cinematic references like Dreyer’s The Passion of Joan of Arc and Alfred Hitchcock’s Rebecca, the cards included architectural work shot by Japanese photographer Hiroshi Sugimoto and a 1903 photo of banker J. P. Morgan by Edward Steichen. “It was a [photograph] of Morgan holding onto the edge of a chair,” Dechant recalls. “When the print was transferred in black and white, it looked like he was holding a knife that was pointed straight towards you. It’s an optical illusion, and that was our reference for making a door handle appear to transform into a knife in our version of Macbeth’s ’Is this a dagger which I see before me?’ soliloquy.”

Although Macbeth is Thane of Glamis when the story begins and, as prophesied by three witches (all played, in an inspired casting twist, by the remarkably elastic Kathryn Hunter), soon to be Thane of Cawdor “​​and king hereafter,” he spends much of the narrative dazed in a thick fog, literalized by Dechant from the start. “Even in the first shot, as you’re looking up into the sky and seeing the ravens flying above, you [come to realize] that you’re actually looking down at the sand,” Dechant says. “By playing with what the viewer is actually seeing, we’re reflecting the psychology of Macbeth. He doesn’t know how any of this will play out and is moving through this morass alongside the other characters.”

Dechant honed in on the elemental forces of the text (which he describes as “repetitive imagery”). A scene in Act IV where the witches surround a cauldron to reveal Macbeth’s cursed fate is here altered so that the room takes the form of the cauldron itself, flooded with water and resembling a “chamber of apparitions.” In an earlier scene following Macbeth’s murder of King Duncan (Brendan Gleeson), the blood of the slain elder dripping grows increasingly invasive: “Duncan’s room is above Macbeth’s,” Dechant describes, “and when the blood from Duncan’s hand drops down below, it’s almost as if the event is now seeping through the ceiling. Something wicked is seeping into [Macbeth’s] room, down into the lower depths.”

The film was shot on soundstages, so the illusion of exteriors (needed to depict, among other locations, the Scottish city of Inverness and Dunsinane Hill) was created using digital backings and matte paintings, some enhanced while production was temporarily on hiatus. “We shut down on March 13th [due to the pandemic],” Dechant recounts, “and that meant that I had time to view the dailies again, grab a frame and begin painting on them. Once we returned to set in July, we shot [what we needed], wrapped at the end of the month, then I continued to work with Joel and Bruno designing matte paintings off and on through March 2021.” Remaining steadfast in the film’s commitment to cinematic allusions and artificial mise-en-scene, evening exteriors feature a backdrop of twinkling stars inspired by the astral opening sequence in Charles Laughton’s sole directorial effort, The Night of the Hunter. Scenes involving actors on horseback were shot on one of the largest soundstages in the world, Warner Brothers’s Stage 16, previously used for blockbusters like one of Dechant’s first industry credits, Jurassic Park (1993).

Currently in theaters and streaming on Apple TV+ beginning January 14th, The Tragedy of Macbeth synthesizes the work of numerous skilled artists behind the camera. “You need to see the hand of the artist [on the film],” Dechant advises, “but the director, the cinematographer, the designer—all of their work has to be seen as one. Since we’re creating it all from scratch, we needed to view it in a way in which artifice and abstraction supported the story.”—Erik Luers