“One of the Thrills of Shooting Horror Is You Can Get Quite Expressionistic With Color and Pattern”: DP Charlotte Hornsby on Master 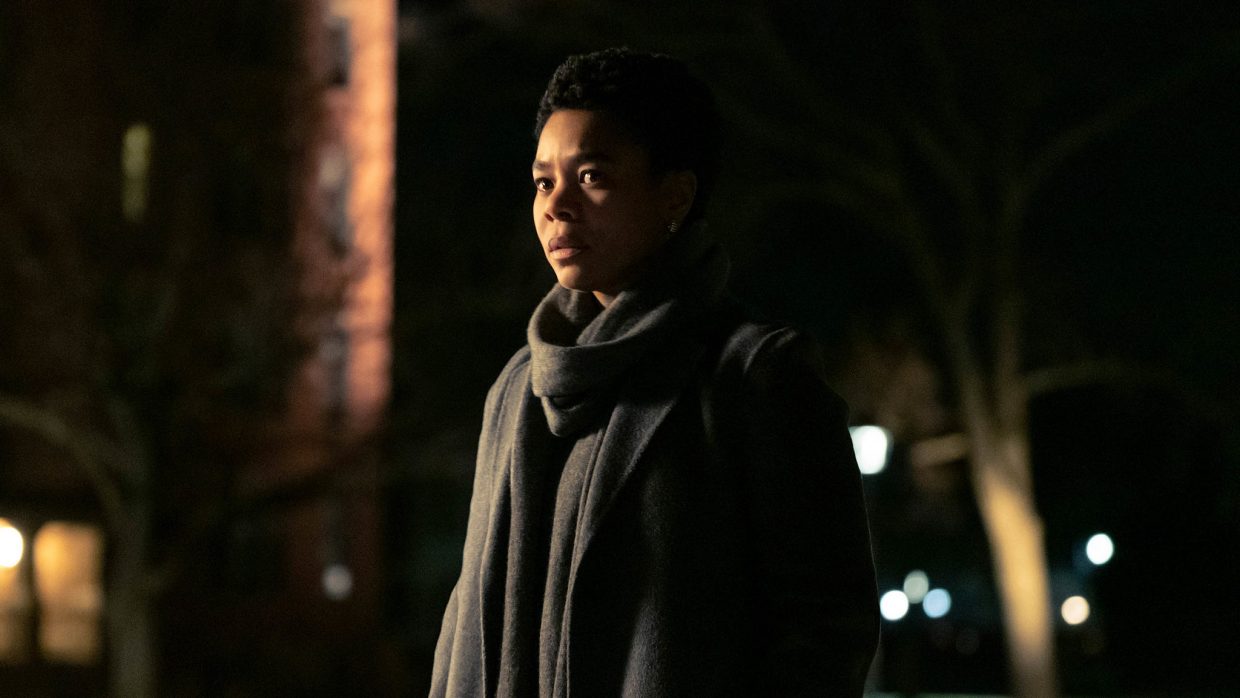 In Master, a student at the fictional Ancaster College, situated on land once used for gallows poles during the Salem witch trials, begins to suspect that the school is haunted and gradually uncovers the secrets behind its progressive veneer. Although the film is loaded with social critique, it operates as a horror film, which allowed cinematographer Charlotte Hornsby room to comfortably deviate from realism in crafting the film’s look. Below, she discusses the influence of filmmakers like Ingmar Bergman and Joanna Hogg and how the film’s aesthetic changes as the narrative unravels.

Hornsby: Mariama and I first worked together on her comedic horror short Hair Wolf. Her writing is visual, playful and razor sharp, and she’s a really generous collaborator. When we were in prep for Hair Wolf, we’d hole up in her apartment for hours sketching out shots, acting out choreographed camera moves and pulling up movie references. We’re both very expressive, emotive people and we really fed off each other’s excitement.

Devoting so much time to prep and pouring over references together allowed us to go into the shoot with a vivid picture of what we wanted and to move pretty quickly. It really set the foundation for the way we would work together on Master.

Hornsby: I wanted to make sure that the frame was on the same emotional frequency as the performance, that a shot that takes time to unfold never loses the trust or the interest of the audience and that we always favored bold choices over formulaic coverage.

One of my favorite scenes is an exchange between Jasmine and the campus librarian. Jasmine has just learned the legend of Margaret Millet, the witch who is said to haunt Ancaster, and is visiting the campus library to learn more. We shot the scene at the Thompson Memorial Library at Vassar, which is full of gothic lancet arches and feels like a cathedral. Our 2021 production designer, Tommy Love, sourced this incredibly unnerving painting of Margaret Millet he hung opposite the checkout desk. She’s beginning to haunt Jasmine’s thoughts, so we started the scene with her portrait filling the frame. We zoom out into a medium shot of Jasmine, linking the two women. We then cut to the reverse of the librarian, who we underlit to give an eeriness to her features. Jasmine extends her signature goodwill to this woman who refuses to receive her for who she is. Zoe Renee plays the whole scene with tenderness and vulnerability, and Megan Byrne, who plays the librarian, goes from a learned condescension to distrust. It’s a subtle scene but the acting is so good, it hurts to watch.

Hornsby: We pulled inspiration from all over. For the first tenure committee scene we kept revisiting the dinner party in Hour of the Wolf. The scene starts with an extended circular dolly shot where the camera careens past these dinner party guests as they’re all taunting the artist. We wanted Gail to have the same dizzying, overwhelming and alienating experience of the academics. Mariama wrote little snippets of dialogue for each actor to say as we moved past them that melted together into a self-important cacophony. I remember the script called it “a tenure meeting with the tenor of a blood sport.”

For the second tenure meeting, the energy is much more contained. We looked at the framing of an interview scene in The Souvenir where Julie has to face the administrators. We lined up all the academics in one frame like an impenetrable wall and placed Liv opposite them all alone.

Other references included Don’t Look Now, Blood Simple, Let the Right One In, Phantom Thread and Rosemary’s Baby, which was a big inspiration for the opening sequence. I wanted the opening shot to feel like the ominous POV of the school itself narrowing in on Gail.

Hornsby: We started principal photography late February of 2020 and shut down two weeks into production because of COVID. When we picked back up a year later, some locations and actors were no longer available. For the Mo Bamba party scene, one side of the room was filmed with haze and the original cast in a house in Ditmas Park in 2020. The other side was filmed in Briarcliff in 2021 when, for safety reasons, we could only have 4-5 extras and we couldn’t use haze. I was brainstorming what to do to replicate the haze and my AC Evan Walsh pulled the scenic Julie Marr over and asked her to spray three clear filters with dulling spray. We called them the “Julie filters.” And the scene cuts together shockingly well! Evan printed labels for them and gave them to me as my wrap present.

Hornsby: We shot on the ARRI Alexa mini with a set of master anamorphics and the Angenieux 24-290mm zoom. I shot all of Hair Wolf on that zoom because the budget was so small and we had to move so quickly and I knew I wanted it with us on Master. It’s a pretty exhilarating range. Mariama knew from the start she wanted an anamorphic aspect ratio and she loved how clean the master anamorphics were, how they barely breathe and you don’t have that signature anamorphic distortion. It also helps that they perform so well at a T1.9 and we were doing so many night exteriors.

Hornsby: Lighting is an emotional language and, like sound design, it works on us at a primal level. One of the thrills of shooting horror is you can get quite expressionistic with color and pattern and can move away from the “soft light only” universe we’re so accustomed to seeing in commercials and prestige TV. We got to play with hard shadows, underlighting, skip bounces, a fire alarm chase sequence, sickly green fluorescents and a Morvern Callar-inspired red strobe with a little tungsten mixed in. Red is the first color we experience as infants so I think it holds a special, primal place in our relationship with the world.

I love to work with gaffers and key grips who are artists as well as technicians, and my collaborators on this shoot were incredible—gaffers Matt Atwood and Danny April and key grips Chris Cazavilan and Tristan Allen. I made a pretty comprehensive library of reference images for the film that I shared with each of them before the 2020 shoot and the 2021 shoot and they each brought so many ideas and visual solutions to the project.

Because there were a large number of night exteriors, the color of our moonlight was going to be a key factor in the look of the film. We tried out shades of blue moonlight that felt phony and called attention to the artifice. The moonlight we landed on was a ½ CTO, ½ green and frame of 250 cocktail that Matt Atwood cooked up for our M90, and the result was subtle and eerie and really gets under your skin. It feels like you’re looking at the moon from underwater or the bottom of a well. It’s a cruel moon, which is perfect for this film.

Hornsby: This is definitely a spoiler, so maybe jump to the next paragraph if you haven’t seen the movie, but the scene where the witch pursues Jasmine and she falls out the window was one of the most crucial and most challenging. The shot count was high, it was mostly night exteriors, the lead was doing her own stunt work, and we needed to maintain a spatial continuity across seven different locations.

To make it possible, we bit off a few pieces of this sequence at a time in each of our main locations. My 2020 G+E team did a phenomenal job lighting these mammoth Vassar library and church exteriors in the days before we had a rigging crew with pre-calls and leap-frogging set-ups. When we resumed in 2021, we added a rigging team led by rigging gaffer AJ DeSimone and rigging key grip Brian McCafferty to the roster, and I don’t know how we would’ve continued to light these huge exteriors without them.

One of the key decisions that made the scene work was to cheat the exterior of Jasmine’s dorm room window with a window that was much more accessible and had a fire escape platform next to it. This way I was able to access Zoe quickly and safely and operate handheld right next to her. Zoe was fearless and aced the stunt work, both on location and in the studio.

Hornsby: Our main focus in the color was staying true to the emotional arc of the film. When the film begins, Ancaster is this prestigious place full of possibility where Gail and Jasmine believe they belong, so we wanted the color to be warm and inviting. As the film progresses, a sinister energy starts to emerge and the school’s progressive façade begins to crack. We started to cool down the image and drain the blood from people’s faces. The moon starts to get a little more green. By the time we reach the faculty party, we wanted everything to feel sallow and rotten, full of jaundiced yellows, so people feel like they’re decomposing.

Sam Daley, our colorist, did a phenomenal job tracking this progression and accentuating the decisions we made on set.