“The Pandemic was Raging but the People I was Filming were Unfazed”: Jenny Perlin on her Doc Fortnight-Opening Bunker 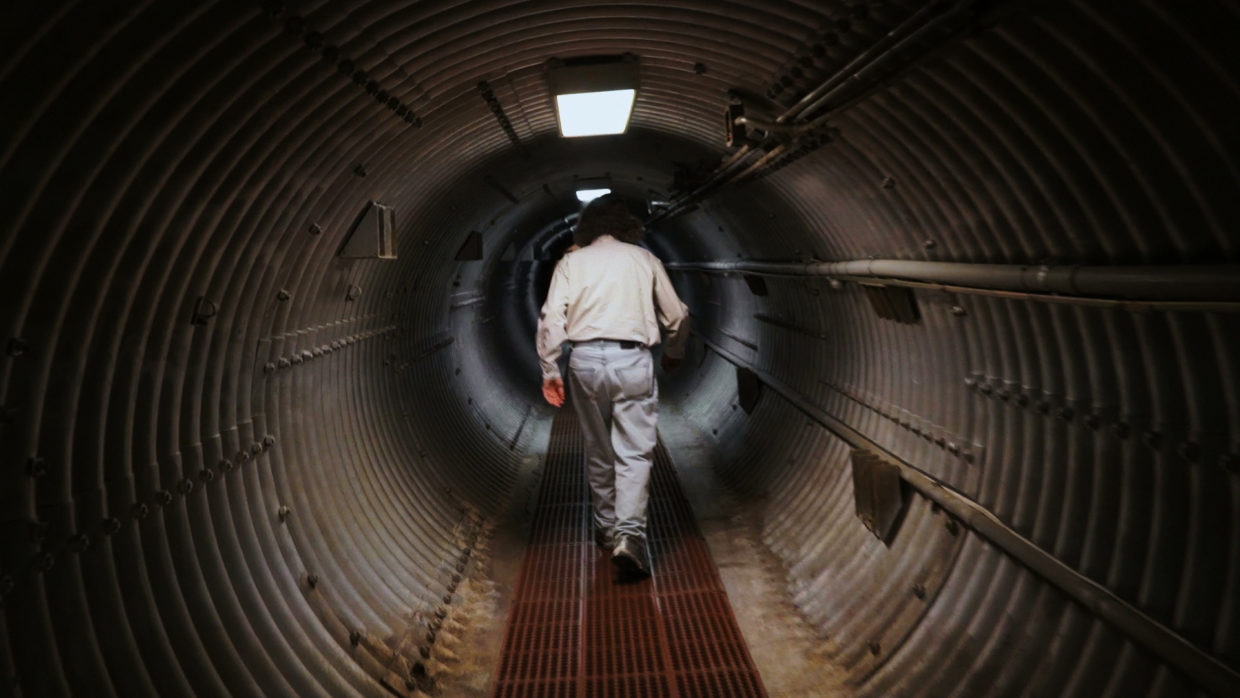 by Lauren Wissot
in Directors, Interviews
on Feb 22, 2022

Multimedia artist Jenny Perlin, whose work includes 16mm hand-drawn animated films, videos, installations, and drawings (some of which are in MoMA’s collection), opens this year’s hybrid Doc Fortnight with Bunker, a literal underground film. Beginning back in pre-pandemic 2018 Perlin took a cross-country road trip, hoping to explore the lives of men (almost all straight, white and middle-aged) who call decommissioned nuclear silos and military bunkers home. Along the way, she also meets the (demographically similar) businessmen building, selling and sometimes even living the fear-driven American dream.

Filmmaker caught up with Perlin a few days before the doc’s February 23rd opening night debut to learn all about her eye-opening journey into an off-the-grid world defined as much by nature connection as by any bunker mentality. (Bunker is preceded by Perlin’s animated short Each thing its place, inspired by her time at the VivosX bunker complex in South Dakota.)

Filmmaker: Though you’d been thinking about this project for years, it was the Trump Administration’s coming to power that really galvanized you. And that obviously occurred before the pandemic, when hunkering down in a bunker suddenly seemed a lot less fringe. So how did COVID-19 change your approach to the film, if at all? Did you ultimately reassess the footage you’d shot or the story you were telling?

Perlin: I finished editing Bunker in July 2021 in the midst of the ongoing Covid pandemic. Not only did the world seem to be following along with Bunker, the film seemed to provide a way of understanding our current time in strangely a more measured way.

I shot the last section of Bunker ten days before Joe Biden was elected president. The pandemic was raging but the people I was filming were unfazed. Their worldview encompasses threat scenarios many of us can’t imagine. I didn’t reassess the footage at all. In many ways the film’s editing became easier, because I knew that what might have been unusual at the outset was now going to be uncannily relatable to more people.

Filmmaker: Except for Milton Torres in South Dakota, all these underground denizens seem to be straight, white, middle-aged men. So was this the only bunker demographic you could find or who were willing to go on camera? Did you film with others who didn’t make the final cut?

Perlin: Everyone I met who had acquired a bunker, or who was involved in bunker construction and marketing, was a man. And every man I met who had purchased a bunker or created a living space in one had a story to tell about the dissolution of their relationships because of the bunker.

While proprietors of the bunker colonies did tell me that women were part of the demographic, I did not meet any during the production. None. The men living in the bunkers, however, spoke longingly about their former wives and partners. They hoped very much to find women who would be enthusiastic about joining them underground.

Filmmaker: One scene that especially stood out to me involved a character asking if you trusted him enough to drink one of his homemade (bunker-made?) concoctions. You answered honestly that you didn’t know. That made me wonder if there were times you actually felt unsafe. To be quite honest, traveling around the country to interview single men with weapons living off the grid sounds like the setting of a horror film.

Perlin: My first trip to meet Ed in Kansas was awkward. But like with most of the people I went to film, I’d had extensive phone conversations with him prior to meeting in person. I’m not going to pretend that I wasn’t nervous. Especially when he closed me inside the missile silo and turned out the lights and left, as you see in the film, which was completely unplanned.

But it was easy to talk with Ed and everyone else I filmed. Each of my subjects and I had hours, and in some cases days, of conversations about their lives and philosophies and ideas. So I didn’t feel all that unsafe after that. I also realized that one of the fun things these guys do is close each other into their bunkers to hear and feel what it sounds like from outside. Eventually I felt welcomed by that unusual ritual. (And on a different occasion I tried the smoothie Ed made. It had bananas in it and was delicious.)

Filmmaker: Probably the biggest surprise for me was seeing how content several of these men are. They seem to find a sort of inner peace or serenity isolated far away from society — society that might be quick to slap on the dismissive label of “mentally ill.”  Bunker solitude really works for them. So did you have any particular preconceived notions of your own upended during production?

Perlin: I make films because of a deep-seated desire to understand a particular phenomenon that I see in society. As an American I’m constantly surprised by the ways in which ideas of individualism and self-preservation manifest themselves.

These attitudes have deep ties to a story we’re all told about the history of America and its heroes. The subjects of Bunker are escaping constraints they felt in their prior lives, while at the same time expressing their sense of freedom and calm in a space that is isolated and cut off. I don’t think that bunker solitude works for them, but that’s where they’ve been able to find space in which to look for themselves.

At the same time they also know and feel their isolation in deep, even profound, ways. Every one of them describes a strong desire to help others, and to build a community within or around their bunker space. Whether they can do that or not is another story.

Filmmaker: So have all the participants seen the final cut? What’s been the reactions?

Perlin: I’m in touch with many of the participants in the film, but they haven’t seen Bunker — and they haven’t wanted to. They know I’ve respected the trust and confidence they put in me throughout the process. And they tell me they remember our subterranean conversations with pleasure. They’re content to know that Bunker is having a successful life out in the world without them.