Kiss Me Before You Wake Up: An Excerpt From Michael Almereyda’s Book, Tesla: All My Dreams Are True 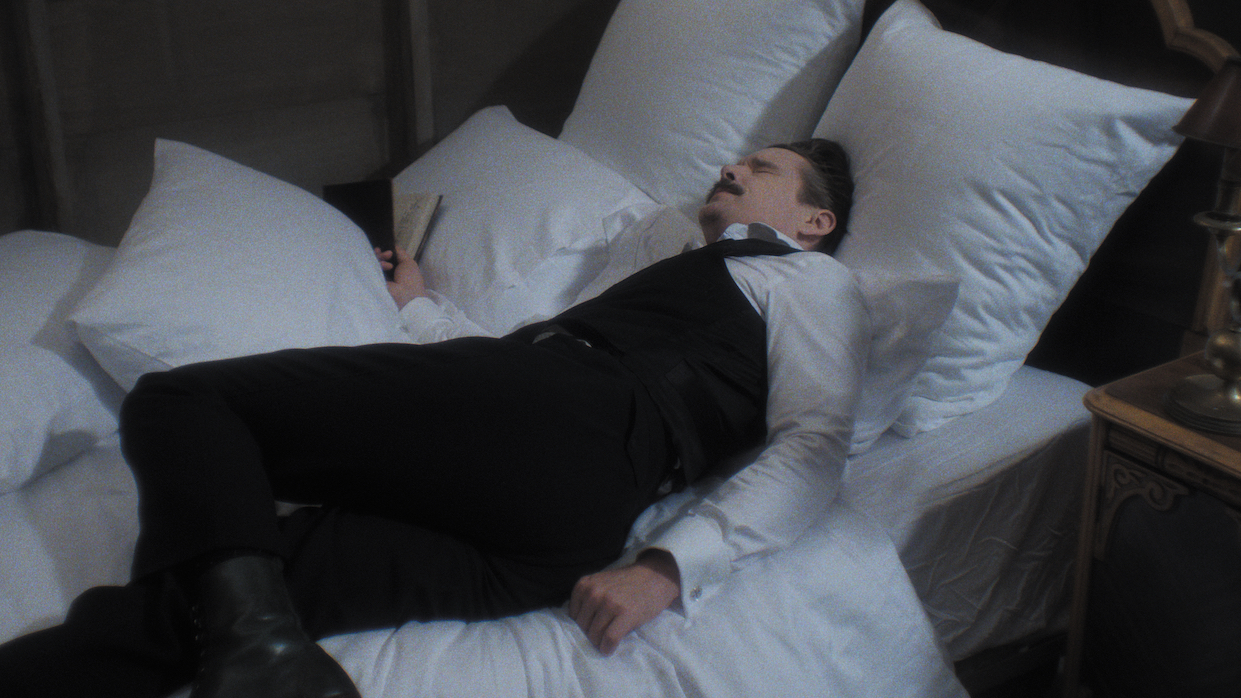 by Michael Almereyda
in Issues, Reflections
on Apr 14, 2022

Tesla: All My Dreams Are True, forthcoming from OR Books, is a jigsawed account of my attempts at conjuring a movie about Nikola Tesla over the past 40 years, tracking questions and clues about the elusive inventor’s life and legacy.

The following excerpt is one of the least self-effacing of the 25 chapters, in which the author shamelessly confides early experiences as a screenwriter and director while Tesla’s name is hardly mentioned.

This is in keeping with one of the book’s epigraphs, an injunction from Derek Jarman: “As the film falls apart, gather up your mistakes and treasure them.”

See shadow puppet plays and imagine that you are one of the characters. Or all of them. —Ron Padgett, How to Be Perfect

The first feature film I wrote and directed, Twister, was a slow, fitful screwball comedy about a wealthy midwestern family splitting apart at the seams, with Harry Dean Stanton playing the imperiously burnt-out patriarch, founder of a highly successful soda-pop empire. Based, fairly faithfully, on Mary Robison’s terrific 1981 novel, Oh!, the film was shot in the summer of 1988 in Wichita, Kansas, with a cast that also included Suzy Amis, Dylan McDermott, Crispin Glover, Charlayne Woodard, Tim Robbins, and William Burroughs.

This is not the place to inventory all the catastrophes that attended the making of this movie. I felt, with absolute conviction, that I had failed—failed to make the movie I imagined in my head, failed to make the film of my dreams.

Nonetheless, when I was invited to accompany Twister to the Deauville International Film Festival in 1990, I showed up, and drifted, with more than a hint of masochism, into a screening of Total Recall, my eyes reflexively bouncing off the French subtitles as I admired how the escalating mayhem accommodated Paul Verhoeven’s sardonic touches, up through and beyond the cataclysmic climax, when Arnold Schwarzenegger and his revolutionary Martian girlfriend are propelled into the life-threatening atmosphere as the poisonous sky convulses and the terraforming planet allows them to breathe free.

“I just had a terrible thought,” says Arnold. “What if this is a dream?”

“Then kiss me before you wake up,” his paramour replies.

I had written these lines, just a few years earlier, for a different incarnation of Total Recall. A bit of pandemic-inspired housecleaning has just unearthed a copy of my contract, which reminds me that I was paid $40,000 for three weeks of work, with the understanding that the film’s writing credits were pre-established and my contribution would go unacknowledged. (The arrangement struck me as more than fair. The script, developed from a twenty-two page story by Philip K. Dick, had gone through more than forty drafts by multiple hands before I took a swing at it.)

I remember being stationed in a bright hotel room in Sydney, Australia, laughing a great deal with Bruce Beresford, who was slated to direct the movie with Patrick Swayze in the lead. When the producer, Dino De Laurentiis, abruptly declared bankruptcy, weeks after I delivered my draft, I was impressed by how resourcefully Schwarzenegger swept in, hiring Verhoeven and retrofitting the project for himself. And I was bemused, in Deauville, to see my dialogue repurposed for the film’s final lines. In the annals of pop culture mega-hits, I’m not likely to have a more significant role than this.

For all that, I was, for a span, a Hollywood screenwriter, a specialist in sci-fi, a go-to guy for futuristic stories attuned to comic-book tropes. Studio execs weren’t hiring me off of Tesla or Mandrake1 but Cherry 2000, a screenplay sparked by a story supplied by Lloyd Fonvielle, a friend who had been too busy to write it himself. That story concerns a young man in a post-apocalyptic near future in Anaheim, California, an idealist whose romantic devotion to his perfect wife, a robot named Cherry, is challenged when she breaks down and he’s faced with the peril of comparing her to an actual woman. When the movie got made, it was my first (and only) experience seeing a studio film start with my script and take shape through a series of committee-approved decisions. The producers treated me with uncommon respect, allowing me to watch at close hand as primary recruits—the director and main cast members—fell short of my hopes and recommendations.2

Wim Wenders hired me in 1986 to collaborate on his Until the End of the World. De Laurentiis and Beresford, a year later, flew me to Australia to help with their Martian adventure. David Lynch, a few years down the line, tagged me to revise his Fantomas, and Tim Burton, with Warner Brothers footing the bill, enlisted me to write an adaptation of Hawthorne’s Rappaccini’s Daughter. These were all lush, otherworldly stories spiked with violence and lyricism, dreams within dreams. The scripts also shared common threads or themes involving free will, identity, and the human habit of commodifying experience, turning people into objects, interchangeable units, machines. (Camouflaged, at the time, with jokes and genre flourishes, these themes may be more conspicuous in films I eventually directed myself.)

Total Recall and the Wenders epic were transmogrified into movies without many traces of my fingerprints; the other scripts came to nothing. I took it as a cue to tilt away from supernatural subjects or, more honestly, I was simply open to flipping the coin and reading off the other side. (I’m not convinced supernatural subjects are the opposite of naturalism, of “real life.” Comic-book reality, with its hectic exaggerations and runaway mayhem, seems to be devouring mainstream American movies, to say nothing of American politics.) Inspired by another true whiz kid, Sadie Benning—an encouraging complement to Welles3—I took up a plastic toy Pixelvision camera and veered into more earthbound territory, stories unfolding in modest, mundane settings, including my own apartment.

My Hollywood apprenticeship, I now realize, involved a mélange of rewrites and adaptations, conditioning me for a future of postmodern rescue operations and archeological digs, with venerable texts fitting as snugly as classic pop/trash into personalized contemporary frames. I wasn’t aiming to be perceived as a marginal, noncommercial misfit, but I was busy convincing myself that the true dream is to tell stories that feel true to life, life as it arrives on your nerves in the present tense. And I developed the conviction that the best films I could make were those that were most fully and inescapably mine, even if they emerged from the vast, untamed scrapheap of preexisting plots, characters, images.

And these notions, I wanted to believe, were consonant with Welles’s idea—shared and demonstrated by Jean Vigo, Sam Fuller, Derek Jarman, Věra Chytilová, Charles Burnett, Chris Marker, Claire Denis, Wenders, Godard, Pasolini, Varda, Cassavetes, Kiarostami, Akerman, Ruiz, an international assortment of renegades and escape artists—that you can make a film like a sketch and it can be more exciting, liberating and alive than the Hollywood equivalent of a finished painting in a heavy frame. All of which has accounted, over time, for a sidewinding path that’s delivered me, fearless as a sleepwalker, into tight corners and deep ditches and other places where caution and commerce don’t necessarily come along for the ride. Various tender and savage producers and financiers have not managed to wake me from this ongoing dream.

Meanwhile, in all innocence, I’m ready and willing to direct the overdue remake of Cherry 2000

1. Mandrake the Magician was my first studio commission, adapting Lee Falk’s comic  strip for a would-be cinematic reboot. The production fizzled, as have all subsequent  attempts at a contemporary  Mandrake franchise, though YouTube provides access to an unmagical 1939 incarnation, a serial from Co lumbia Pictures.↩

2. My dismay didn’t apply to the casting of Melanie Griffith, the great Ben Johnson, or the late Pam Gidley, though I wished they’d been supplied with different clothes, hair styles, and hats. ↩

3. Orson Welles glides through multiple chapters of the book, as does Mandrake—fellow magicians who play with mirrors. Apart from providing me, early on, with an impossible role model, Welles manifests as J.P. Morgan in The Secret of Nikola Tesla, a stiff, quaint, Yugoslavian biopic released in 1980, directed by Krsto Papić, also viewable on YouTube. ↩