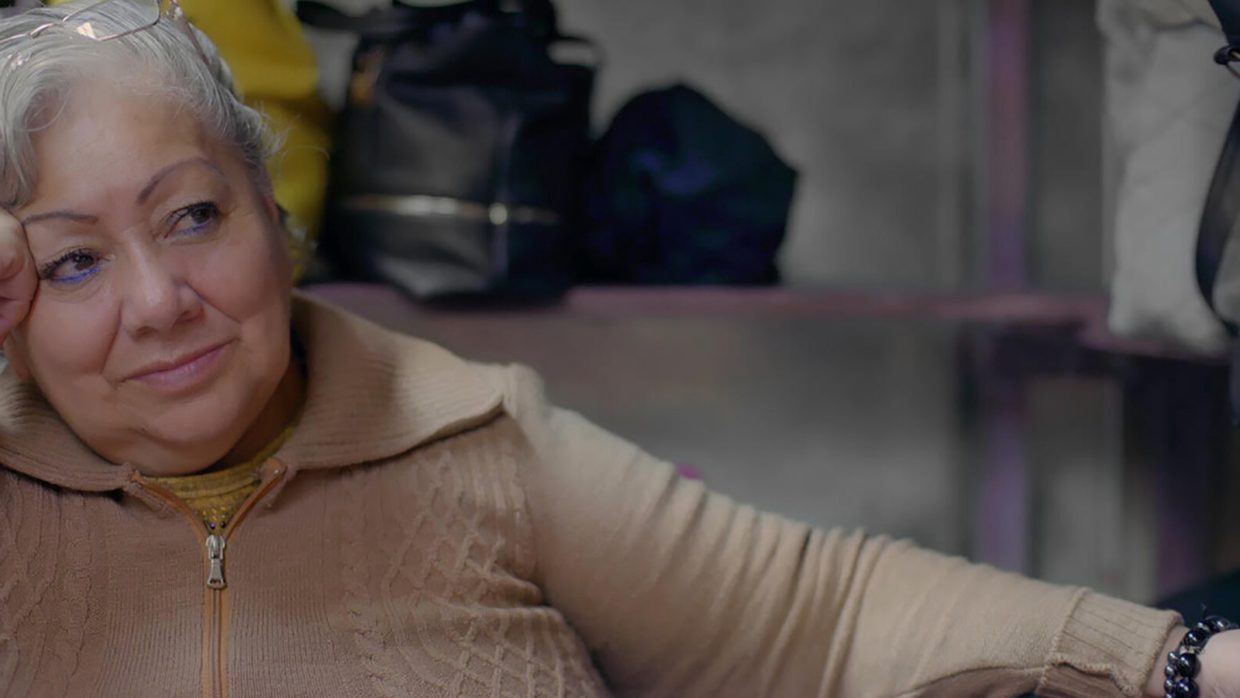 by Lauren Wissot
in Directors, Interviews
on Apr 25, 2022

“Men are only good for two things: for nothing, and for money.” So sayeth the titular, straight-talking matriarch at the heart of Laura Herrero Garvín’s La Mami, a gloriously female-centered portrait of the hardworking dancers of Mexico City’s Cabaret Barba Azul. Told entirely from a female POV – with no men in sight to hijack the narrative – the film takes place almost exclusively in the cloakroom/bathroom/dressing room of the legendary nightclub, where Doña Olga (aka “La Mami”) presides. It’s in this safe space that the cabaret world vet, who in the past 45 years has transitioned from party girl to seasoned caretaker (most notably of newbies like Priscila, a Tijuana resident just trying to earn enough money to pay her son’s medical bills), dispenses advice on everything from always using a pseudonym to staying sober under pressure. (Because the ladies make a living providing a “girlfriend experience” of sorts – both drinking and dancing with the customers who pay for their time – getting drunk on a nightly basis is just one hazard of the job.)

Luckily, Filmmaker was able to catch up with the Barcelona-residing Spanish director (2016’s The Swirl) – and co-founder of Sandia Digital, which has produced around 20 shorts – just prior to her (IDFA, MoMA Doc Fortnight, SXSW, etc.-selected) latest’s theatrical debut at NYC’s Maysles Cinema. (One screening remains on April 27th.)

Filmmaker: I read in the press notes that you pretty much stumbled into this story having been out with friends for a celebration at Cabaret Barba Azul. So did you immediately know that a documentary could be built around Doña Olga and the women? How did you even approach them with the idea?

Garvín: Yes, I met La Mami during a night of celebration with friends in January 2015. In the bathroom I heard a girl who worked there tell the lady who takes care of the space, “Mami, he asked me for my hand [in marriage]. I don’t know what to do. I’m very excited…” The lady answered very serenely, “Daughter, don’t worry. You know how it is. He has already asked you many times. Stay here for a little while and then come down.”

I was surprised by such a familiar maternal relationship in such a dark place for women. So I just stayed for awhile, observing what was going on there. Suddenly I realized that girls kept coming in. “Mami, can you put on my dress for me?” “Mami, I need some advice.” “Mami, I am fed up with…” In the midst of this frenetic and hostile place for women, La Mami represented an embrace, a feminine alliance, the resistance. She is the false mother that we all need when we don’t have one, or are far away from our own.

This is why I dared to approach her and propose making this documentary with her. She is tough with girls from outside of their world. I really don’t know why she was different with me. I just told her that I was dedicated to telling stories, and that I wanted to tell hers with a great amount of respect and intimacy.

So she made an appointment for me for the following Tuesday at 9pm in the bathroom. And that Tuesday at the end of January 2015 started it all.

Filmmaker: So were the characters initially wary of you, especially as a Spaniard “invading” this very private Mexican space? What did you do to build trust?

Garvín: The research that was required before even putting a camera in the dressing room took almost three years. It was clear from the beginning that we would all have to dedicate a large amount of time. We just didn’t realize how much. I knew that I wanted to make an intimate and close film that did not fetishize or make assumptions; a film that was not black and white, but respected the gray tones and nuances of the characters and their realities.

Over many months, then years, I concentrated on just being there; sharing conversations with them and getting to know their dynamics. It was a long process of listening and observing. Little by little I began to tell each of them about the project – sometimes outside in a café, sometimes on the dance floor with a beer, sometimes in the bathroom while they were changing.

Filmmaker: You focus primarily on Doña Olga and Priscila – each riveting in their own right. That said, was this decision at least partially do to access? I can imagine that many of these women, especially the ones with family members that don’t even know they work there, might not want to appear onscreen. What boundaries were set?

Garvín: La Mami was the first to want to participate in the film; the girls took a lot more time. The exposure of identity was a certain theme, as some agreed to participate only with their voice, while others with their voice and from behind, and a few with everything (that is, choosing to reveal their identity).

But by the end, when we started recording, most of them decided to participate completely. By that point everyone felt they were part of the project. Priscila actually arrived in the middle of the shoot and in an unusual way. She trusted me and decided to give herself over to the shooting process fairly quickly.

Filmmaker: As an outsider who’s long focused on Mexico how do you ensure avoiding extractive filmmaking (or even the appearance of)? Do you collaborate with locals throughout the entire filmmaking process?

Garvín: I try to find stories that connect with very intimate moments of my personal history and life in Mexico. For eights years I lived there. It’s a country that lured me in, that filled me with stories, perspectives and experiences. It was there that, with my camera in hand, I witnessed the brightest and most hopeful scenes of my life. But also the darkest. Over those eight years I worked and collaborated with many women and groups. If I think of Mexico the first thing that comes to mind is the feminine alliance, which is so important to me.

It was also there that I witnessed how the situation of violence against women has been getting worse and worse. Of course it affected me in a very personal way. Somehow locking myself in the bathroom of the Cabaret Barba Azul was a sort of coping mechanism, a way to try and feel safe. And to better understand the world I inhabited.

I really looked at this dressing room as an underworld that still belongs to the patriarchal system, but where ruptures were able to arise in the competitive dynamics between women; cracks that invited alliances, to make chosen families and to protect ourselves as a group. And of course the film team was made up of a majority of women, both Mexicans and Latin Americans.

Filmmaker: I’m guessing you’ve screened the film for all the participants – and perhaps even for the Cabaret’s male owners and customers. So what’s been the various reactions?

Garvín: Yes, and it has been very exciting. The girls see the film as a tool to break stigmas and judgments that society has put on them without even knowing them; and it’s a way for them to learn more about their stories, their dreams, and their concerns. At the premiere in Mexico, when we shared the film with the girls and La Mami, it was funny because many who did not want to participate during the filming now regret it – and want us to make a second film that includes them as well.