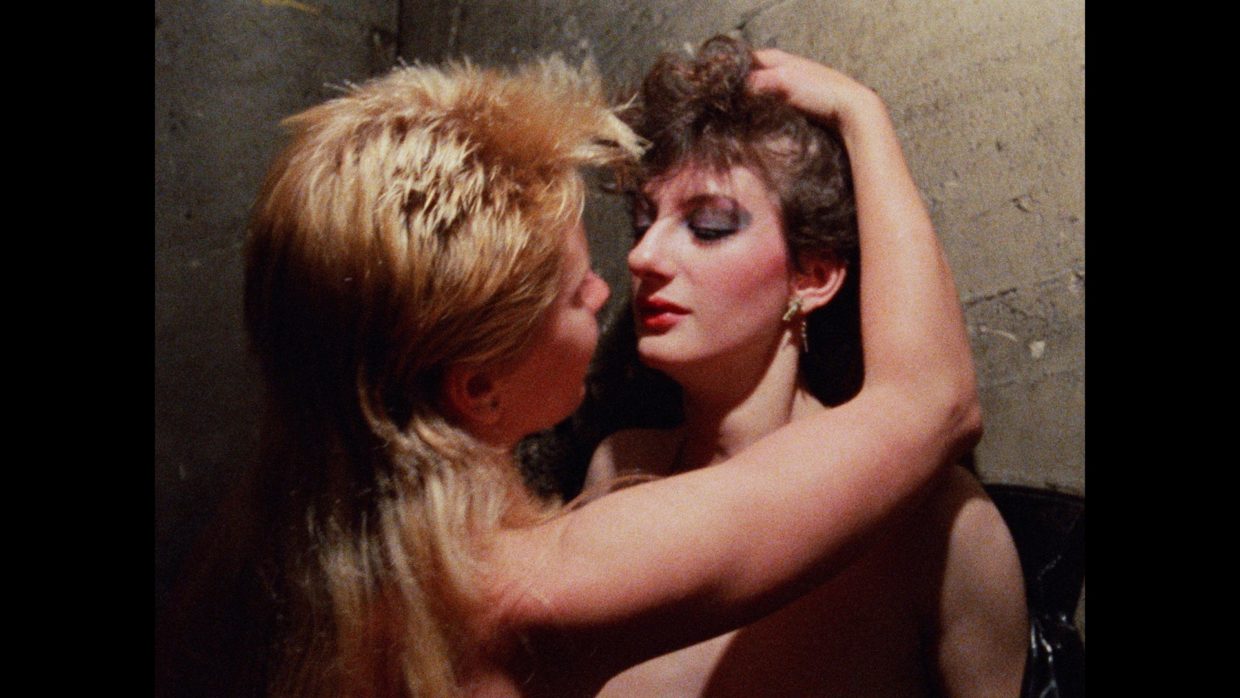 by Lauren Wissot
in Directors, Interviews
on May 9, 2022

Any director whose bio includes being fired from “an animated children’s film for Miramax titled The Great North Pole Elf Strike for portraying Santa’s elves as gay” is my kind of filmmaker. And Juliet Bashore, of the aforementioned dismissal, also has the added distinction of being the force behind the prescient time capsule of the pre-gentrified San Francisco sex industry, Kamikaze Hearts (1986). That “fictionalized documentary” (“hybrid” was a term yet to be coined) depicted the doomed relationship between lovestruck Tigr (also a producer on the film) and the object of her adoration, gender fluid “(nonbinary” was likewise not yet coined) porn star Sharon Mitchell, aka “Mitch.”

It’s a film that certainly defied expectations back then — the period’s average mainstream movie contained hotter sex scenes — as well as now, with the riveting psychodrama’s upcoming rerelease in a 2K restoration by the UCLA Film & Television Archive. So to learn all about the journey from underground to establishment, Filmmaker reached out to the unconventional film artist (and VR pioneer) a week before, via Kino Lorber, the doc’s nationwide rollout, starting with a May 13th NYC debut at BAM and May 20th in LA at Alamo Drafthouse.

Bashore: The intent was never exactly to shoot a “straightforward” doc; it was always to do a film that felt really straight and controlled in the beginning, but that would then disintegrate into cinema verite by the end.

Filmmaker: I think you actually had a crew that was unaware this was a (fictionalized) documentary about Tigr and Mitch.

Filmmaker: I was quite surprised to read several critics at the time of the film’s initial release use words like “harrowing” and “distressing” to describe it. I’m honestly not sure why they felt that way. Sure, Tigr and Mitch are caught in a “toxic romance,” but so are a lot of straight, substance-abusing vanilla couples. And we actually see very few scenes involving sex or drugs. Were you surprised by any particular reactions back then, or now?

Bashore: Was I surprised by the reaction? That would be an understatement. I thought doing this film would at least help me get work! Instead it was like I was covered by a toxic sludge.

There was such a stigma around porn and pornographers in Hollywood; it was like a stench that could not be washed off. Not so much in Europe, but definitely in LA. Liberals were outraged by it because of the way the left looked at porn. (In fact, the original lefty DP quit on grounds it wasn’t didactic enough about women’s exploitation.) Mainstream lesbians were outraged by it because it did not toe the line on putting out a positive media image; even a lot of sex-positive lesbians (besides certain outlaw thinkers like writer Susie Bright, performance artists Annie Sprinkle and Shelly Mars, and programmers like Jenni Olson at Frameline) didn’t really embrace it. I think this third issue was because the three of us (me, Mitch, and Tigr) were all of a certain subset of the punk, post-hippie generation that was ultimately more androgynously/bi/polysexually identified. You feel that in the perspective of the film, the flavor of the film, and this polysexual identification was really not welcomed into mainstream lesbian culture. Tigr and I were both interested in playing with that. Remember, this was way before the days of LGBTQ. Back then there was only L and G. Anything B-ish or T-ish was not invited to the party. Women who also had sex with men were viewed as “weekend lesbians” and not to be trusted.

Also, the film was rarely viewed in the right context. It didn’t fit into the regular programming genres, so film festivals ran it as a straight doc. I would beg festivals to program it with the (narrative) feature films but they were like, “Nope, this is a documentary, sorry, can’t run a doc with the features.” I would say, “It’s not really a documentary,” and they would say, “Yes it is.” So audiences never saw it in the right context.

In addition, I think part of it was how the structure worked, how at first it feels like a “straight” doc that ultimately falls apart. That happened in a way that was understood differently at the time. The audience back then didn’t read the shift in artifice. I think this formal trope is what gave the extra sensation of gritty realness to the shooting up scene. As we descend from “puff piece documentary” into “cinema verite” the comfortable distance gets collapsed. At the time, it had a Battle of Algiers effect. Neo-neo-realism.

Filmmaker: Not only have you been exploring the junction of fiction and nonfiction since long before “hybrid docs” were a thing, but you’re also a pioneer in the realm of VR. So how does film intersect with other media formats for you?

Bashore: Completely. The exploration of the “uncanny valley” of VR is just a continuation of the formal ideas I explored in Kamikaze Hearts. At the intersection of parallel realities we find dystopic fictions.

Filmmaker: This film also really struck me as more relevant than ever given we’re in the social media age where everyone is playing to the camera 24/7. I was just reading a past interview you gave in which you said that pornography can’t operate without the “protective distance of the voyeur.” Neither can social media in a way. So do you see connections between the two, perhaps when it comes to depersonalization?

Bashore: It sure does seem to have caught on. Maybe credit for the first portrayal of this cultural phenomenon should go to Billy Wilder for Norma Desmond in Sunset Boulevard. But, as you say, times have changed. Eric von Stroheim has been replaced by a Like button.

And now, 30 years later, there are still certain participants who want to have their roles downplayed for professional reasons. On the other hand, I have been in touch with people like author Jennifer Blowdryer, actor (and retired railroad engineer) Jon Martin, and of course the amazing Dr. Sharon Mitchell. Mitch is actually excited, and we interviewed her extensively for the upcoming Blu-ray DVD. Tigr, however, has entirely reinvented herself and (in her new incarnation and under a different name) “neither embraces nor abhors” her past.