Adventures in Festival Babysitting: The Need for Day Care at Film Festivals 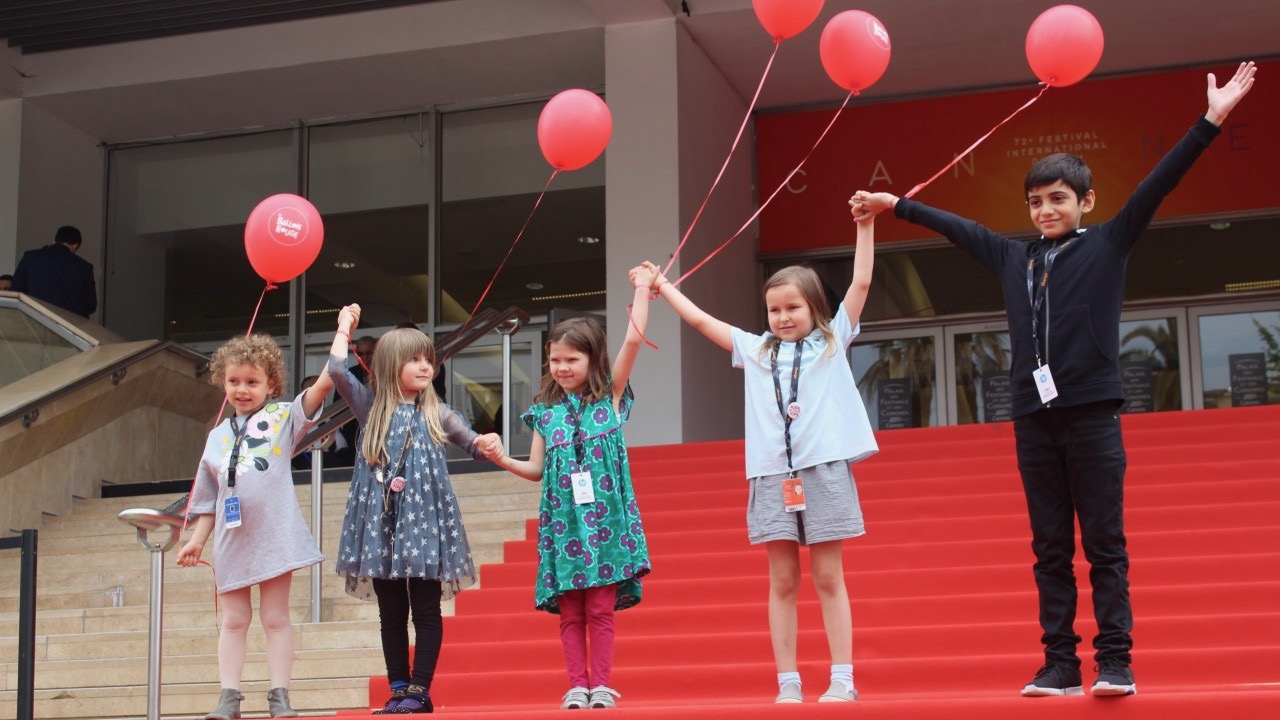 Le Ballon Rouge children on the red carpet at Cannes

by Tiffany Pritchard
in Festivals & Events
on Jun 6, 2022

Thanks to a fully supported day care facility in Cannes called The Red Balloon, or Le Ballon Rouge, after Albert Lamorisse’s popular children’s film, I just about conducted “business as usual” on the Croisette. I’m still reeling from this opportunity, as are the other participating parents who continue to converse in a long “parents in Cannes” WhatsApp group chat. Some variation of “I couldn’t have attended Cannes without this service” is the most common takeaway.

With child support such an essential need for many working professionals, I thought it was interesting that most of the industry guests I spoke with had no idea the service existed at Cannes, nor could many even imagine how it might exist at other festivals. It’s a fair point, given post-COVID funding issues, but even before the pandemic the lack of child care at entertainment industry events has been an ongoing issue. Indeed, when I’ve asked various festivals about child care, the respective industry heads have given me a look of exasperation. They would love to provide child care, but how? And where would the money come from?

Nonetheless, as “inclusivity” remains a value espoused by festivals and film organizations, it shouldn’t be forgotten that there is a group of mothers (and fathers, many of whom I saw with their little ones at Le Balloon Rouge or walking the halls of the Palais) eager to get back to work and share their stories, yet too often the child care barrier prevents this from happening.  And, as festivals think about their audience development, perhaps they should be more considering of their youngest attendees, who could be the ones supporting cinema in the years to come.

First, let me start by demonstrating how wonderful festival day care support can be, as observed through my own lens in Cannes. Le Ballon Rouge was started in 2019 by a powerful force of four film professionals who are mothers living abroad, where handing children off to eager grandparents or jet-setting a nanny along on work trips is not an option. Together the women banded together to, initially, create an informal community. That was followed by Le Ballon Rouge’s first day care setup in 2019, made possible with the support of the Marché du Film’s ex-head Jérôme Paillard as well as eager film sales and funding body partners.

Originally, the service was conveniently located next to the Palais, but this year it was a 15-minute walk from the Cannes center in a local school, a venue shift that allowed for more indoor and outdoor play. (For parents, the hike uphill after a long day of meetings was something to bear in mind). For the younger ones, there was a baby lounge on the ground level of the Palais, and for all accredited children (and their respected nannies, should that apply), a festival badge was granted. This was a fancy perk my daughter took full advantage of, showboating her pass all along the International Village, looking like one of the industry’s next budding deal-makers.

On-site child care was provided to children aged six months to 12 years-old for a maximum of six hours per day (a stipulation of French law). The fees were kept extraordinarily low because of the festival and sponsor support: €60 for three days, 100€ for four-to-six days and 130€ for all 11 operating days of the festival – a fee I often pay for one day of child care!

The on-site team of child-minders, hired from local company Nanny Please, who are a sister company to established French agency Ma Bonne Fée, were incredibly patient, kind and experienced, and they made my daughter feel right at home. At Le Ballon Rouge I never saw more than 20 children at a time, and often observed around 10-15, with a staff of four including one nurse.

Children were from all over the world, mostly speaking English, French and Spanish, though English seemed the overriding language. When walking in the space, music from various Disney films could be heard wafting out from the speakers, with daily activities including drawing, dance, water games, treasure hunts, and even an animated film screened one day within the festival exclusively for Le Ballon Rouge attendees.

I heard several parents note towards the end they saw advancement in their child’s development, as some children do not often speak English. (Or in my daughter’s case, she is not often around French-speakers — I am now very pleased with her frequent use of phrases like à demain or c’est magnifique!)

For parents with evening events, the nannies could be hired for €20 euros an hour; a list of external childminders was also provided. Often, they would take several children to the beach or next to the Palais where a playground, carousel and car rides were situated (how many times at previous festivals have I raced past these landmarks late to a screening or meeting?!). The location was perfectly situated so one could see and hear all of the red carpet announcements, not to mention the famed Cannes music that lingers in one’s head months after the festival ends. Needless to say, my daughter had a thrilling time, even getting to see and hear the ear-splitting Top Gun: Maverick fly-over.

Child Care at Festivals: What’s Next

The four founders informally speak with other festivals, such as Venice, who hosted a Kid’s Corner in 2019, however the process is time consuming and requires on-the-ground support in each location to help lobby, secure funding and facilitate operational needs. One of the founders, Michelle Carey — a festival programmer for the Cannes Quinzaine, Rotterdam, and New York Film Festival — said the group is looking at different models to sustain the business. She added that they will continue offering a support community via their Facebook and What’s App pages, where parents can swap tips and suggest babysitter recommendations.

As I continued to dig, I found iterations of Le Ballon Rouge at other festivals, but they mostly appeared as one-off experiences (thus far). In 2019, Toronto Film Festival offered subsidized day care across downtown, with one center near Bell Lightbox remaining open over the two festival weekends. Sundance jumped on board the daycare ship in 2018, thanks to support from parenting support group Moms-in-Film, Amazon Studios and LA-based freelance work/child care space Collab&Play. The Sundance initiative offered free child care at the local Park City Community Church, which included a book nook, nap spaces, a wellness room, a wardrobe of costumes and a miniature red carpet area.

SXSW’s 2017 edition had a mobile child-care unit coined the Wee Wagon, something Moms-in-Film founders and filmmakers Mathilde Dratwa and Christy Lamb thought could also work as an on-set operation. The event was again in partnership with Collab&Play, who are sadly no longer in business. Its former director of communications informed me that despite the demand for child care, it was always a challenge to get people to see it as a priority. And when I reached out to Moms-in-Film, which now too is no longer in business, Lamb reiterated the fact that creating childcare events is not easy. In their case, the overhead on building out a unit was a formidable task. She added that they made “awesome cases for sustainability and family services,” but that partnerships didn’t come through with financial support. And then there were the challenges of the pandemic’s festival dead zone.

In a panel centered around festivals in Cannes, programmer Hugo Rosák from the Karlovy Vary Film Festival said they have a small nursery each year because there is a demand from festival goers-turned-full-time-parents who still want the opportunity to see films and conduct work as needed. At another Cannes event, executive director Emily Skyle-Golden of Reno’s Cordillera Int’l Film Festival told me they have an adjoining play center where children can be dropped off for several hours.

So it’s clear that possible day care solutions at festivals exist. Their prevalence mostly boils down to convincing festival directors and key sponsors that such services can be done simply and economically. I keep thinking how many people could benefit from this, moms and dads alike, and not just at film festivals. As the Moms-in-Film team suggested, film sets are often in need of child care services too. When at Poland’s cinematography festival Camerimage last November, I spoke with a prominent female DP who reiterated this point, saying that child care is a necessity for people who work in production and asking why this expense couldn’t be placed in production budgets. But by the very point that she felt uncomfortable talking to me about the topic made it clear we are many steps away from child care and support for parents being accepted in the industry.

Think “youth programming” and the mind often goes towards high-school initiatives and festivals targeting teen makers. But what about programming for those even younger? Unfortunately (or not), my three year-old is a wiz on my iPhone and her Kindle. Could her — and her age-group’s — tech know-how be encouraged through family-friendly screenings at festivals? Again at the festival panel in Cannes, it was mentioned that festivals need to focus more on younger audiences, otherwise cinema and festivals have a bleak future. How about more family-friendly screenings or curated outdoor film programs with interactive children’s activities?

Once again, Karlovy Vary proves itself family friendly by hosting outdoor screenings, games and several bespoke play areas dotted around its festival grounds (it’s too bad most of the programming seemed to be without English sub-titles the last time I attended). Warsaw boasts an impressive children’s line-up with their festival Cinema in Sneakers, offering live-action films, documentaries, animated films and experimental films, all ranging from short to feature-length.

Toronto used to play host to TIFF Kids, which began with a focus on children ages three and up, though, that has been retired, with a shift now to 14+ audiences. In the UK, Into Film provides film education to schools and marginalized communities, while also hosting its own festival for young filmmakers. On the US side, New York International Children’s Film Festival partners with cultural institutions, performing arts centers, festivals and indie cinemas to bring film to young people. And the Chicago International Film Festival provides a similar focus with its youth spin-off CineYouth.

Said Le Ballon Rouge founder Carey of her four year-old son, “My son is already saying he has to go to Cannes to talk to filmmakers on stage, as he saw some of my Q&As for the Quinzaine.” I can attest to what she said, adding that my daughter is now more keen to see movies “on the really big screens.”

As festivals continue going back to in-person events, parents and festivals need more of this enthusiasm. And just as film organizations are working to create more inclusive and equitable spaces, both onscreen and off, everyone needs to be working together to build support for families across the industry. The filmmakers and film professionals of tomorrow depend on it.