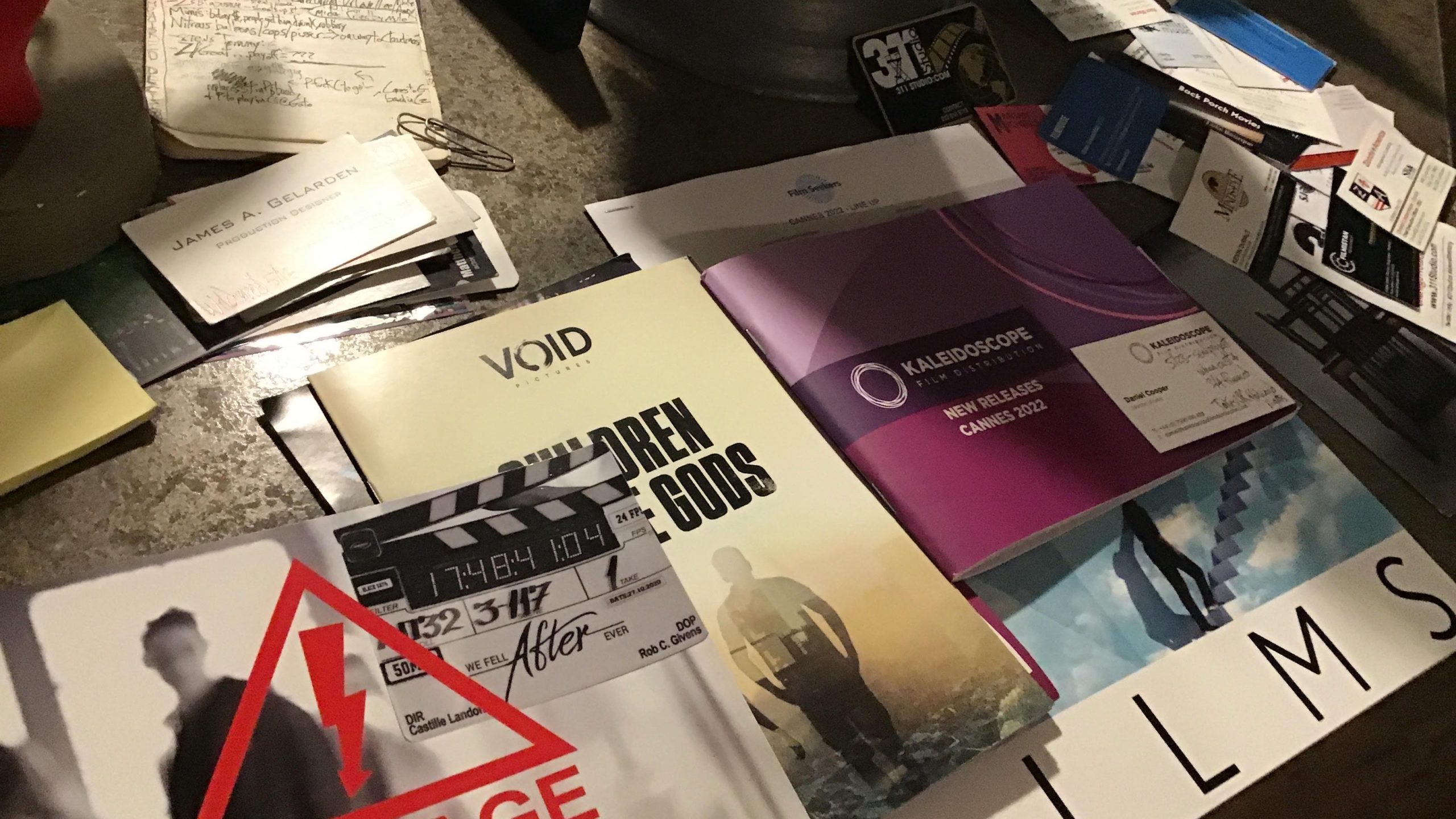 I am a New Orleans based writer-director who is putting together a follow-up feature to my film Laundry Day. In 2021 I attached executive producer Corky Kessler and raised money to attend Sundance for the first time (I know, I know… overdue) with him as my defacto host. Of course, Sundance was canceled at the last minute, and I lost a big chunk of the money and what I thought was any hope of rubbing elbows with people who can help my new project, Drinking Music, get made at a substantial budget (my first seven-figure film).

A few months later a colleague asked me if I was attending Cannes. Having never considered it an option, I snickered but out of curiosity asked on Twitter. Filmmaker editor and producer Scott Macaulay answered, “Apples to apples, going to Cannes is cheaper than going to SXSW” and proceeded to school me on the finer points of the festival’s expenses. Free acceditation… if you qualify. To my shock, I qualified. With the leftover money, I was go for Cannes! I wanted to attend the Marché specifically and to meet foreign sales reps and financiers. The goal was to understand their needs and see if (down the road) my project can meet those needs.

I prepared a pitch deck, a poster, and one-sheet. I also tried to complete “ripomatic”/”sizzle reel” but ran out of time. (It turned out I didn’t need any of that stuff at the festival itself, but I was glad to have the materials finished and waiting at home when I returned, exhausted.)

As a first timer, I employed three strategies, each a version of the “brute force”/”turn over every stone” approach.

First, I spent the prior month delving into Cannes’s Cinando database, sorting for relevant people and financing companies and cold-contacting with an introduction to myself and the project. This got me around 15 meetings scheduled.

Second strategy: meet financiers in the Marché. This was an instant failure as on Day 1 it became clear the Marché is where sellers are, not buyers.

Third strategy was to attend as many parties and mixers as possible and meet people. On Day 3 I randomly ran into a friend, Ben Weisner of Vanishing Angle, and he explained that financiers and sales agents have moved to hotels and to look for balcony banners. This revelation allowed me to pivot Strategy 2 into a new approach:

– take photos of all hotel balconies.
– research every company. Sort according to relevance. Get staff list so I can visually identify people when I enter offices.
– go to their office. Ask to talk to the boss/owner. Give them a verbal pitch and then ask what they would need to be interested.

Amazingly, this approach got me one-on-one sit-downs with the owners or bosses of 12 out of 16 companies because they just happened to be around, and I was only asking for a couple minutes of their time. I figure this must be an only-at-Cannes type of occurence. From these meetings I learned a ton about foreign sales financing, the companies’ myriad financing models, and which companies are relevant to which project scenarios. For example, company X only does final third of budget, company Y only co-finances when a film is half financed, company Z will finance up to 50% of budget in exchange for English-territory home video rights, etc. and ad infinitum. After the sit-downs I wrote the key takeaways on their business card or catalogue for later processing.

I made sure to get direct contact info from all of them, so if/when I go back I won’t have to deal with middle execs or gatekeepers.

By and large the best financing prospects in the short term were connections I met while socializing — having Corky there was very helpful in this regard —although the Cinando meetings resulted in two very strong leads.

My mantra is, “A few high-quality leads is great than a big quantity of low-quality ones.” Given Memorial Day and the short week after it, I waited two weeks to start following up, and I used that time to prioritize the leads. So now I’ve followed up and am using the wait to implement notes on my screenplay and ponder the million financing scenarios now laid out before me. My top priority is protecting the integrity of the project, so I’m putting together a team of New Orleans producers to handle relationships with these potential financing sources. Only time will tell how all this will shake out, so fingers crossed.