Kept in Sync: Paul Rogers on Editing Everything Everywhere All At Once 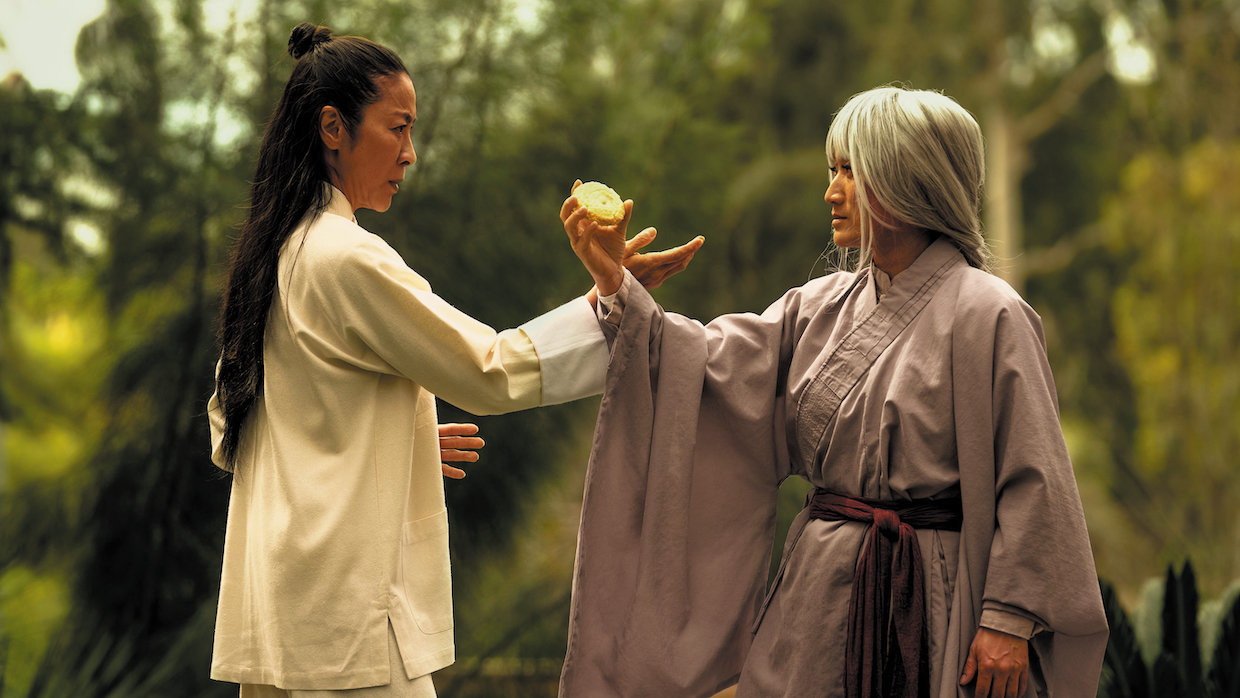 Michelle Yeoh and Ke Huy Quan in Everything Everywhere All at Once, courtesy of A24

Everything Everywhere All At Once, Paul Rogers, Winter 2023

Everything Everywhere All At Once editor Paul Rogers first met co-directors Daniel Kwan and Daniel Scheinert, or the Daniels, at OMG CAMERAS EVERYWHERE, a free filmmaking summer camp pairing kids with established filmmakers to shoot videos for musicians like Daft Punk, Diplo and Benny Blanco. When I called Rogers via Zoom to interview him, Scheinert sat beside him with a guitar and occasionally chimed in: “The first thing we worked on together was a silly music video with kids—no rules, directions or studio notes. We just had to make something that would make the kids excited about what they did that week.”

The crew carried this playful spirit among friends through the production and editing of Everything Everywhere All At Once, an absurd multiverse kung-fu comedy about a family, the Wangs, whose laundromat is under zealous audit and whose lives are under threat by a villain who lives in every parallel universe at the same time. They were able to maintain this close-knit collaboration in post-production despite the pandemic causing the work to become remote. “It was like hanging out with friends,” Rogers said of cutting the film at home. “A bunch of my friends were on set, and I got to see them in the footage and hear their voices, talking and hanging out. [It made] the lockdown less lonely.” To stay connected, Rogers and the directors used Resilio Sync, which uses BitTorrent rather than the cloud to sync their hard drives, and cut on Adobe Premiere Productions, where both parties could see what the other was working on. They also used Frame.io, a centralized hub for media sharing and feedback tracking. “I would upload stuff to Frame.io, and they would leave notes in there,” the editor recalled. “Sometimes I’d see them work out something in the comments back and forth. It was a really fun way to work without being siloed off and just sending cuts every couple of weeks.”

Although the crew, budget and post-production hardware were small, Everything Everywhere boasts epic scale and production value. “I cut the movie on a 2017 iMac with a little hard drive and some headphones in my living room,” Rogers said. And the VFX crew was “like seven of the Daniels’s friends who do After Effects.” Which is, Scheinert added, “another reason why we used Adobe—we wanted to do VFX while we cut it and not have tons of complicated workflow visuals. We were roughing in VFX the whole time.” Rogers would also create temp VFX shots in Premiere to help them imagine the final flow of the scene. “Paul loved to invent split screens—put together his favorite pieces of a scene without asking us permission,” he laughs. “When we locked the edit, our VFX supervisor [Zak Stoltz] kept finding Paul Rogers specials. ‘There are like 15 VFX shots you didn’t tell me about!’ They were so simple that they worked already.”

Rogers cut the fight scenes between universes similarly to how he cut dramatic ones between Evelyn Wang (Michelle Yeoh) and her husband, Waymond (Ke Huy Quan), and daughter, Joy (Stephanie Hsu): He let the choreography and performances play out in wides, only cutting into closeups at decisive moments. Holding on an actor’s reaction for a second longer at the beginning of the film could make or break the audience’s connection with an emotional beat that occurred near the end. To make sure punches and kicks connected, Rogers and crew used intensive time remapping, the slowing and quickening of shots via keyframes: “I had never done [time remapping] to this degree before. If I was just cutting straight, I would have to cut maybe four to five shots in the sequence. Instead, I can time remap a wide shot and split the screen so that one person’s sped up and the other person’s not, [all the while maintaining] the illusion of real-time.” Anticipating extensive time remapping, the Daniels and DP Larkin Seiple shot much of the film overcranked (at a high frame rate). This required that Rogers’s assistant editor, Zekun Mao, do ample work to sync audio. Mao and fellow assistant editor Aashish D’Mello prepared the edit in a way that spared Rogers the minutiae of their dense workflow organization.

Such measures were never intended to incorporate frequent slow motion, but rather to make constant, subtle fluctuations to add weight and contact to combat. “There’s a shot where Evelyn hits a guy with her palm, and he goes flying back,” Rogers notes. “Right after the hit, he launches into the air a little bit faster than real time. While he’s in the air, I slowed it down to 85 percent. So, he had a lot of hang time to make it look like he got thrown hard backward, then slams back onto the ground in real time.” Time remapping and VFX elevated the talents of the Martial Club Stunt Team (viral YouTubers who act and fight in the film), Yeoh’s experience as an action star and Ke’s experience as a stunt choreographer, helping the film “overcome that canyon between big-budget blockbusters and indie films.”

The long opening scene in the laundromat that introduces the Wang family and several plot elements also took intricate timing. “It’s scary, sometimes, how delicate the balance is,” Rogers says. “Adding one microexpression—just a second longer of holding a shot of her looking at her daughter—can change someone’s idea of who a character is, can make Evelyn a sympathetic person who is trying her best or teeter her over the edge into a terrible mother you don’t care about.” The scene ends with Evelyn and Joy parting in the parking lot without resolving a painful fight. At the end of the film, they reconvene in the same parking lot, given one last chance to reconcile. “Early on, we had [test] screenings where the reconnection between Evelyn and Joy wasn’t that satisfying to people because they didn’t really like Joy as we had cut her,” Rogers notes. “In the first scene in the laundromat, she was coming across as a brat, not because of her performance, but because of the way we put it together.” Less responsive screen tests inspired the directors to shoot pickups of Joy driving away, crying. “That shot of her in the car made that scene in the parking lot two hours later work,” Rogers says. “The screening where we inserted that was the first time people became emotional in that end scene. That’s why those scenes you plant in the beginning are so exciting.”

The first cut, which ran around two hours and 50 minutes, was a maximal version of the film that included every joke and pushed every scene as far as possible. Rogers stripped some scenes to their bare essentials or dramatically altered their original tone and content. Sometimes he did both, as was the case in the scene where the film’s antagonist, Jobu Tupaki (also Stephanie Hsu), first confronts Evelyn in the hallway of the IRS office. Jamie Lee Curtis’s character, auditor Deirdre Beaubeirdre, originally figured heavily in the scene. Rogers explains, “That hallway scene was just really not working. The performances were incredible, and Jamie Lee Curtis was hilarious, but her character just did not belong in that scene. And it took us a long time to figure that out. [Jobu’s] like a predator stalking her prey now, and before she was like this really funny agent of chaos, a clown telling these jokes and monologues. It also took a while to let go of that stuff because it looked great and was acted great.” Scheinert laughs, “I sent Jamie Lee Curtis a message to warn her that that scene had gotten trimmed, and she texted me back, ‘I never understood it.’” Rogers and the VFX team had to comp Curtis’s character out of shots and cut around her.

When asked if he ever used time remapping to hold an actor’s expression or eye contact for a moment longer, Rogers admits, “There is no tool in the toolbox that I won’t use, for better or for worse.” He made dialogue overlap more than it did on set and has, at least in the past, “added a foreground element of a character so that what used to be a clean shot of a character became an over-the-shoulder. I get a lot of questions like ‘how many cuts are in the [universe jumping] montage,’ or ‘how long did it take?’ [But] the fun and hard stuff was the character work. I would cut a fight scene when I needed to relax.” As an exercise to uncover what could go unspoken, Rogers and the Daniels sometimes would cut a scene to be all looks and no dialogue.

Rogers felt a motivating pressure to do the hard work of his cast and friends justice—“[This was] bigger than anything I’ve ever done, and [it was] directed by my two best friends, and a bunch of my friends were on set. I’m going to be the last person to touch it, so if it turns out bad, it means I fucked up.” At the same time, working among close friends meant that his boundaries were respected, “as a husband and a father. In fact, [the Daniels] encouraged me to take care of myself. It sounds crazy, but that can be hard to come by in the film industry. They don’t have a ‘film comes before everyone’ mentality, they have an ‘everyone comes before the film’ mentality. You don’t have to sacrifice the quality of the work to do that. In fact, the work is better.”