“I Wanted the Story to Start in a Downpour and End With Waves”: Hirokazu Kore-eda on Broker 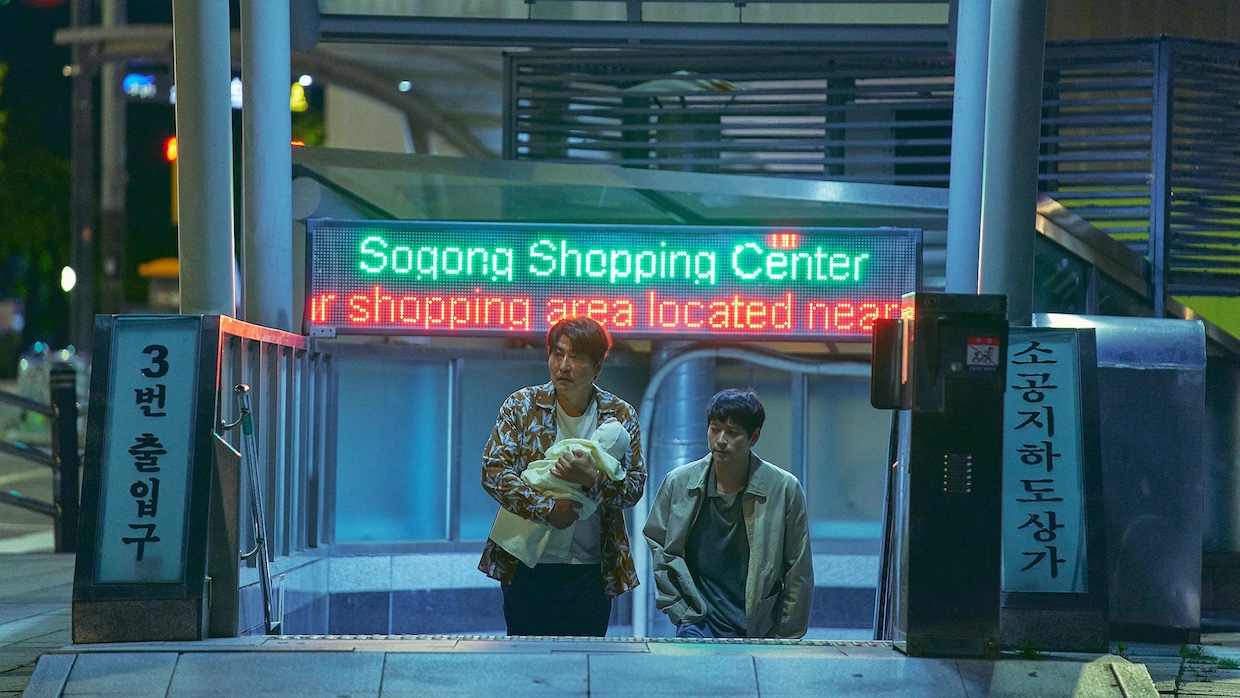 by Daniel Eagan
in Director Interviews
on Dec 30, 2022

What could be more heartless than selling abandoned babies? Hirokazu Kore-eda’s Broker asks just that, and against all odds, finds a way to understand how people could behave that way. It’s the Japanese writer-director’s first feature shot in South Korea, having most recently worked in France for his previous film La Vérité.

Broker stars Song Kang-ho as Sang-hyeon, a tailor in debt to the mob, and Gang Dong-won as his younger business partner Dong-soo, an orphan. Using Dong-soo’s professional connection to a local church, the two begin covertly snatching babies from the building’s baby box, which people use to anonymously give up infants. After wiping the church’s security camera footage, they sell these children on the adoption black market. Bae Doona, who worked with Kore-eda on Air Doll, plays Soo-jin, a detective pursuing the illicit baby brokers. Lee Ji-eun also stars as Moon So-young, a sex worker who gives up her infant son in the film’s opening scene and then tries to retrieve him.

Broker competed at Cannes, where Song Kang-ho won Best Actor, and at Venice, where Kore-eda received the Robert Bresson Award. It’s now screening theatrically in New York and Los Angeles via NEON. Kore-eda spoke with Filmmaker via Zoom ahead of the film’s release. Thanks to Bethan Jones for translating.

Filmmaker: You’ve said that you initially showed Song Kang-ho a four- or five-page treatment. How much of the story do you usually know before you start shooting?

Kore-eda: I had about two-thirds of the story down before we started shooting, right up until they arrive in Seoul. I wrote a letter to everybody saying that what[ever] happens to these people in the van once they arrive in Seoul, I’ll figure out as we go along.

Filmmaker: What changes with the script while you’re shooting?

Kore-eda: The boy who joins them from the children’s home [Hae-jin, played by Im Seung-soo] turned out to be much naughtier than I expected. He wouldn’t listen to a word I said. My original idea was that he would go on their journey with them, but he was so naughty that I said, “Listen, I may just have to get rid of your character.” I was only half-joking.

I like to change it up a bit depending on what I see coming from the actors as we’re filming. For example, Song Kang-ho’s character was initially going to die. He would disappear, no one else would know that he died. But as I watched Song acting, I decided that his character Sang-hyeon doesn’t die in this story. I thought, I will have to rethink this ending. So I rewrote it, showed it to Song Kang-ho, rewrote it again and showed it to him. There was this back and forth, an exchange of ideas, to come up with the ultimate ending. It was a very interesting process.

Filmmaker: He’s the type of actor where you want his character to live even when he’s stealing from you.

Filmmaker: Did Sang-hyeon always have a daughter in your script?

Filmmaker: When we spoke for La Vérité, you said you would take the dailies home at night, edit them, and then reshoot the next day if needed. Was it a similar process here?

Kore-eda: My normal way of working is that I shoot, edit that night, then I do some rewrites for the next day. My process is that I write, edit, and film all in parallel. It was the same way here as when I was working in France. Apart from the ending, I don’t think I changed anything that drastically. I feel like most of the details were the same. It’s normal for me to change things as I go along, but not so much this time. The cast and crew may think differently [laughs], but I don’t think I made many changes.

Filmmaker: Can you talk about working with cinematographer Hong Kyung-pyo [Burning, Snowpiercer]?

Kore-eda: The two of us are the same age, and there’s a special word to describe that friendship in Korean. They use chingu. He’d say that to me, “Chingu, chingu.” We were very well-matched. He got straight away that I wanted to shoot different types of water. I was really happy with his work.

As is often the case with camera operators and directors of photography, he always seemed to be looking beyond the actors’ performances. At how the wind was blowing, for example, or how the rain was falling. The steam, the falling leaves. He would look at all of these things. After we’d done a scene, he would ask, “Did you see those birds in the background?” We worked very well together, I think. We were looking for the same things.

Filmmaker: Did you always plan to shoot the opening sequence in the rain?

Kore-eda: Yes. It did change slightly, but I always wanted the movie to start in the rain and end at the sea. Then to have different forms of water the whole way through, including when they’re bathing the baby. There are all of these different types of water surrounding the child, so I wanted the story to start in a downpour and end with waves.

Filmmaker: You take the characters to an amusement park and stage a scene in a Ferris wheel where Dong-soo explains himself to Moon So-young. It’s just devastating to watch. Can you talk about putting it together?

Kore-eda: We had a cabin on the ground where we rehearsed and worked everything out. After that, we just filmed it in the moving Ferris wheel. We used a single camera because there was only room for one cameraman in the cabin. I was watching remotely from the ground.

Each rotation of the wheel would be a take, with the camera first facing one direction and then the other. We had a limited amount of time because I wanted to shoot in the evening. We actually filmed it over two days. We shot a lot of the scene on the first day, two sets of each setup. So two rotations for each actor, each day.

When the Ferris Wheel got to the top, it was so far away that I couldn’t hear the actors anymore. I didn’t get to hear their performances until later. It turned out that those two takes that we did on the first day were the best ones. I could tell as soon as I saw Lee Ji-eun’s expression when she got out of the Ferris wheel. I knew that was the one.

Filmmaker: At what point did you get Jung Jae-Il’s soundtrack score? Did the score affect your edit?

Kore-eda: He added the music during the edit. I would say, “I want the piano here,” or “I want some guitar here.” He came in during the edit and was with me the whole way through. He even came in for the dub. He watched it all the way through at that point and went back and rewrote some of the passages, especially the opening piano. He wanted to see how the rain sounded with the music, how the car sounded, whether it all worked with his music. He rewrote it until it was just right.