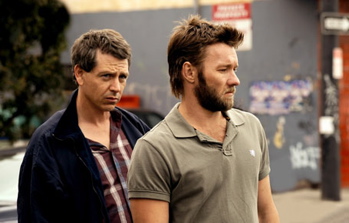 
Like his stunning short films Netherland Dwarf and Crossbow, David Michod’s terrific and terrifying feature debut, the 2010 Sundance World Dramatic Competition winner Animal Kingdom, is a smoothly photographed, moodily scored tale of a trapped, dim and docile young man who suffers at the hands of a careless and, in this case, criminal family. As in his previous work, Michod relies on an insistent voiceover to provide biting interiority while the unrelentingly grim working-class Melbourne milieu is strikingly depicted in slow-motion shots and even slower push-ins. James Frecheville is stoic and sullen as the lead, who we first glimpse as he’s watching a rancid television gameshow next to an unconscious woman who turns out to be his just recently heroin OD’d mother. Brought into the fold of his criminal clan of uncles by his complicit grandmother, he quickly becomes their errand boy and accomplice in the brutal revenge murder of a pair of policemen.

Michod, co-star Joel Edgerton and editor Luke Doolan, who are just a few of the members of a promising bevy of Australian filmmakers working under the Blue Tongue Films moniker, specialize in unforgiving worlds. In Animal Kingdom, like Mr. Michod’s previous work and Mr. Doolan’s Academy Award-nominated short Miracle Fish, they bathe both us and their characters in a constant atmosphere of dread. Here, these characters are well drawn by a strong ensemble cast of actors that, save Guy Pearce as a detective, is made up of performers who, while well known in Australia, are scantly recognizable on this side of the Pacific. Jacki Weaver as the grandmother and Ben Mendelsohn as the most sadistic and yet emotionally needy of the brothers Brown turn in a pair of near-perfect performances. This is as impressive a debut as you’re likely to see all year. Sony Pictures Classics begins rolling the film out on Friday. 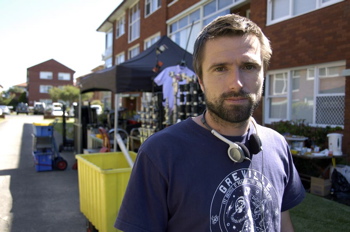 Filmmaker: You’ve been working in collaboration with a tight-knit group of Australian filmmakers for some time now. How has that collaborative network at Blue Tongue films informed the work, both in this film and your earlier shorts?

Michod: The beauty of that little gang of friends is that we just know each other very well. We know what each other’s sensibilities are. We have some sense of what our varied strengths and weaknesses are. So much of making something or writing something is being able to bounce it off of other people. What’s most challenging in doing that is being able to filter feedback, being able to listen to it and interpret it and glean from it what you need. Being able to do that with people who you know very well and with whom you work very closely makes that an easier process. What I love about our little gang is that it started back when we were very young and had no idea what we were doing really. We had some sense of what we were doing and where we wanted to go, but we didn’t know whether or not it was a achievable and we just wanted to support each other.

You see, the first year of film school was the first year of school I ever enjoyed. When it ended, I had no idea what I was supposed to do. Films are so big and expensive, cumbersome and daunting. Even when they’re short, it’s difficult to keep working when you leave school. The beauty of having a collection of peers is that you can stay engaged. Even if one of you isn’t engaged in making a short film, another probably is and you can participate and learn. For a couple of years there it felt like that’s the way our little collective was operating; we were all at some point either making something or helping others make theirs. As a result, I feel like I spent a number of those years after film school constantly engaged, constantly honing the craft and doing it with people who had a shared level of experience and excitement.

Filmmaker: In a lot of ways this film feels like an outgrowth of your short work. How did it come about conceptually? When did you first begin to think that it was going to get made?

Michod: I started writing the screenplay pretty soon after film school. I just wanted to stay engaged and obviously writing is the simplest and cheapest part of the process to engage in. I realized very quickly that I hadn’t learned a lot at film school about how to write a feature-length screenplay. For the first couple of years I was fudging my way through drafts that were quite naive, unformed and tonally confused. Over the course of the year it took me to write the film I honed my craft and got a much better handle on what it takes to  make a feature screenplay feel complete and whole. I did that by writing Animal Kingdom and writing other things for other people. I was also honing the craft by making and writing shorts, which is a great learning experience — not just writing something but then seeing that written scene get made and how it succeeds or fails.

When I first started writing Animal Kingdom I assumed I’d be writing it for someone else to direct because I couldn’t picture the situation where someone would give me the huge amount of money I would need to make the thing. The more I wrote it the more emotionally attached I became to it and the more determined I became to direct it myself. That meant that I knew I needed to go away and make some shorts to A) further practice my craft and B) Get me the attention I needed to make the film possible. Much to my surprise, that happens very simply and fluidly when it works. I went and made Crossbow for that very reason. Almost immediately Animal Kingdom went from something that felt like a pipe dream to something that felt inevitable. It was quite surprising to me that that can happen to quickly on the back of a short film.

Filmmaker: In your films thus far you seem to be particularly interested in brutal family dynamics, be they crime or rampant drug abuse or neglect,  and how, particularly within the working class, they can shake and break the growth of young, vulnerable men. What draws you to this subject matter?

Michod: I’m sure on some level there are personal questions that I’m trying to explore. I have nothing to complain about as far as my own childhood is concerned — it was perfectly normal. At the same time I remember finding being a kid quite a struggle it terms of working out who I was and where I fit in the grand scheme of things. I suspect that in Crossbow and Netherland Dwarf and certainly in Animal Kingdom, I am on some level exploring how a young person forms a sense of self, a sense of agency and a sense of control over their environment. There’s something more visceral and powerful about dropping that discovery into a heightened and dangerous world.

Filmmaker: Two performances from this film have really stuck with me: Jacki Weaver’s as the criminal matriarch and Ben Mendelsohn as her eldest, most dangerous son Pope. Both of those performances could very well enter the pantheon on chilling screen criminals. How did you go about shaping those characters with them?

Michod: It’s funny that you should pick those two out because Ben and Jacki were the two actors who I specifically wrote characters for from a very early stage. I knew I wanted Jacki to play Smurf because I knew I wanted that character and everything I knew that character was capable of being to come packaged in a sort of disarmingly delightful personality, which Jacki is in addition to being a supremely talented actor. Jacki is diminutive and delightful, yet very experienced and very knowing. I didn’t want that character to come across as some grizzled, old criminal matriarch. I wanted the Smurf character to be disingenuously naive and to creep up on you over the course of the film.

Ben is one of my favorite actors in the world. Both are, in a way. Jacki is a national treasure. She was there at the very beginning of the ’70s cinema renaissance in Australia and has been working consistently at a very high level ever since, mainly on stage for the last several years.  Ben has also been doing this for nearly 25 years. He started when he was a kid and is very well known back home. He is known in the public consciousness mainly for his boyish charm, but in real life Ben is quite a forceful and unsettlingly unpredictable personality. I loved being able to put his extraordinary talent and his unpredictability into a genuinely menacing adult character.

When we started working, I think Jacki’s character came to us relatively easily. I think once Jacki and I had worked out that the character was most compelling when played with a certain levity, everything that followed happened quite fluidly and smoothly. The character of Pope is very complex and I think a little more difficult to find. We discovered very early on in rehearsal that [Pope] wasn’t just a character that was going to leap off the page; every scene Pope was in could be approached from 100 different angles. It became apparent very quickly that Ben and I would need to spend two solid days exploring the character very intimately, just him and me, so we spent two days in his hotel room going through the script line by line, developing for ourselves that thing that is always so useful on a film set, a very easy shorthand. I think once we’d found that, the frustration that the complexity of that character might present actually became quite enjoyable and rewarding to play around with.

Filmmaker: When did Guy Pearce become involved? How instrumental was his involvement in being able to secure financing?

Michod: I have no doubt having Guy on the project made those who were interested in investing in the project see it as a less risky proposition. I just feel lucky that he was my first choice for the character anyway. When we sent him the script, he responded to it very quickly and very enthusiastically. He became attached to the project about a year before we started shooting. He demonstrated a genuine willingness to do whatever he could to make sure the film happened, which was very reassuring for me.

Filmmaker: Do you list and board your films meticulously? I ask because whereas Crossbow feels like a film in which every image is carefully designed and thought out beforehand, leaving nothing to chance, this film has a slightly more offhand quality about it at times.

Michod: I approached this film the way I approached all the shorts. I don’t storyboard. I very often start storyboarding and then just get bored. I get bored very quickly and can’t stand looking at my drawings. I shortlist quite meticulously though and I love using maps of locations.

Michod: That’s right. I think a looser, more freeform thing comes more easily with experience, but almost all my anxiety when I’m on set is about coverage, about knowing whether or not I’m getting the basic building blocks that I’ll need to get me through that long, grueling, lonely process that is the edit. All of the other stuff I revel in. I love working with actors, I love talking to designers and answering questions and getting lost in the world of the film, but I’ve had that experience making shorts before where you begin editing and you realize that there is some crucial piece of the puzzle that you neglected to get. I always want to do whatever I can to make sure that doesn’t happen again.