“The Cinema Gods Smiled Upon Us”: DP Andrij Parekh on The Pod Generation 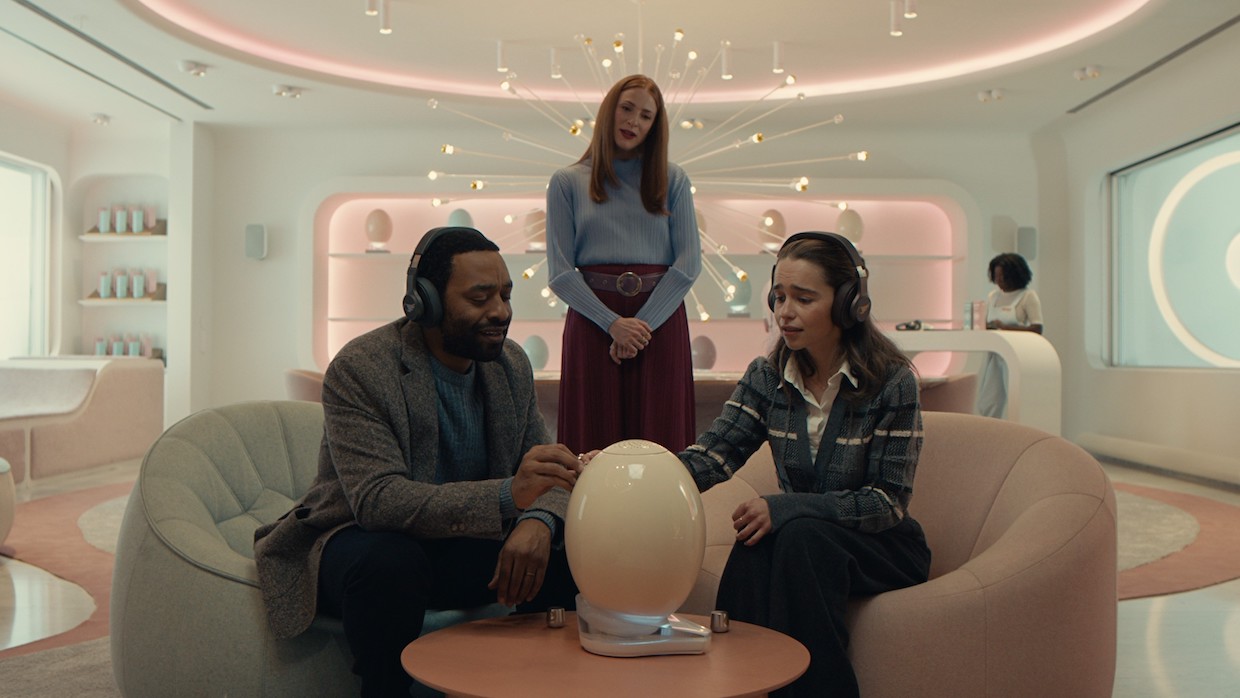 In the not-so-far-flung future, a New York Couple (played by Emilia Clarke and Chiwetel Ejiofor) manage to snag a spot at the coveted Womb Center, which offers conveniently detachable vessels that foster fetuses without a human toll. This is the premise of Sophie Barthes’s latest film, The Pod Generation, a meditation on the rampant commodification of natural processes in our tech-obsessed culture.

Cinematographer Andrij Parekh—Barthes’s husband and long-time collaborator—delves into the specifics of shooting the film, including his painstaking efforts to utilize as much natural light as possible.

Parekh: We set out to make a very untraditional sci-fi, and as the film centers on the themes of birth and the return to nature, it was important that the visual image had a roundness, a feminine quality, with a soft pastel color palette. We wanted to make the film feel organic, but also to subtly address the alienation of city living and our tech-obsessed culture. The frames in the city tend to be more composed and formal, and as we enter into Rachel’s subconscious through her dreams, the image begins to feel more subjective and we begin to use a looser camera.  Finally, as the characters return to nature, the camera is free, either through steadicam or hand held.  We didn’t want to be too didactic with the rules, but hopefully the feeling translates on either a conscious or subconscious level.

Parekh: As life partners, our references span nearly 20 years! Before any film, we tend to go back and watch Fellini (8 1/2), Bertolucci (The Conformist), Lynch (Mulholland Drive) and Woody Allen (Annie Hall) on a regular basis. We also spend a lot of time in museums and are deeply influenced by painters Francis Bacon, Vilhelm Hammershøi, Marie Laurencin and Georgia O’Keeffe, specifically for this film. We chose a  Scandinavian color palette with soft, muted pastel colors (soft pink, pale turquoise, pastel blues, soft greys, very soft orange and warm greens with some high-contrast blacks). No primary colors. Soft directional natural light. And, of course, photography! We looked at Saul Leiter and American fashion photographer Deborah Turbeville, who greatly influenced the palette of the film.

Parekh: Alexa LF, with Tribe 7 Blackwing Primes. I had been using that combination on long-form and commercial projects recently, and really liked the depth of field when shooting wide open with the larger sensor.

Parekh: In the best case scenario, I use natural light as much as possible and argument only when absolutely necessary (especially if the scene requires coverage). We shot much of the apartment location with available light, and I find that it is so freeing for the director, actors and crew—with no lights on the floor, we can move the camera wherever we want, and quickly.  And if I have to light, I try and use very large sources that are off the film set. I usually spend a lot of time with the AD trying to schedule the days based on the movement of the sun, and it usually works.

Parekh: There were a couple of difficult scenes to manage lighting-wise/time of day. One was a sequence that occurs in four rooms that happens in real-time, and we were trying to shoot the whole sequence at magic hour. When I pitched the idea to Sophie and the first AD, they thought I was crazy (and still do), but we managed to pull it off with clever scheduling and a rehearsal ahead of shooting. We shot that one sequence over three days, all at magic hour. For me, it was important to give the apartment location many looks, as we spend so much time there. Another difficult scene lighting-wise was when we shot Rachel going to the “nature pods.”  The space we shot in, Gare Maritime in Brussels, has incredible windows that allow the sun in from above—but only for two 45-minute periods each day. We had a number of grey days in Brussels, but managed (with a bit of luck) to have the magnificent sun right where and when we needed. Again, good planning and crossed fingers. The cinema gods smiled upon us that day.

Parekh: The palette of the film was set quite early by Sophie, and I always like to involve the creative heads to discuss as early as possible in prep.  The production designer (Clement Price-Thomas) and costumer (Emmanuel Youchnovski) were excellent collaborators, and they understood immediately what Sophie was looking for—and, in some ways, more importantly—what she wasn’t looking for. I think the palette is very harmonious between all departments.

We finished the film with colorist Peter Bernaers in Brussels, and he did an incredible job of unifying all the work on screen through color and texture. We had a shooting LUT that we used (I like to have the LUT in camera so that everyone viewing a monitor can see how colors are rendering). We worked with Peter on Sophie’s last film, Madame Bovary, and we used Peter again because of his sensitivity to not just color, but tone and feeling. He truly is a master.