“Nothing Is Harder To Shoot Than a Dinner Party” | Ira Sachs, Passages 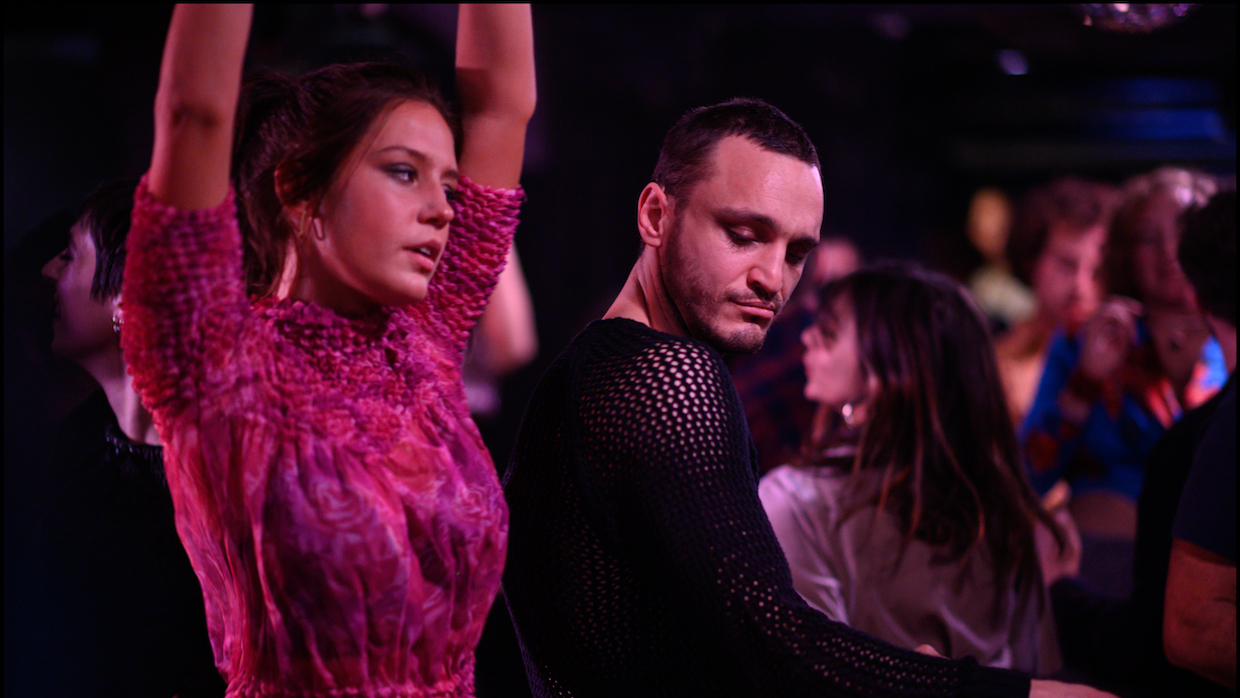 For weeks before production, the film’s cinematographer Josée Deshaies and I begin a long process of creating a storyboard for the film. At some point, after we’ve established our own rhythm, we invite an illustrator—in this case, our production manager Marianne Germain’s brother Gabriel—to join us to translate our conversations into images.  The work of the three of us then alternates between drawing and re-drawing scenes from the script and a close study of a select number of films that I think of as “key” to our visual strategy, including Maurice Pialat’s Graduate First and The Mouth Agape, Jean Eustache’s The Mother and the Whore, Godard’s Passion, Frank Riploh’s Taxi Zum Klo, Pasolini’s Teorema, and Jacques Nolot’s Before I Forget (a film on which Josée was the cinematographer). Now focusing on our script, Gabriel begins to draw frames and movement; Josée translates those images into camera placements that she notates onto location blueprints, and then, finally, I use those diagrams to create shot lists. We have in this way moved from the abstract (influences) to the real (shotlists) through a relaxed, patient process that includes good food, strong coffee and several moments when the whole thing seems impossible. Over the course of several weeks, and many hours, the film has slowly come to life. We’ve successfully managed to break down the monolith of the script into distinct and concrete elements—a series of shots and camera angles. As I don’t rehearse with my actors in advance of the shooting, it is this process that gives me the ground I need to feel confident and ready to shoot the film.

But then sometimes there are days during production when nothing you have carefully planned seems to work on set. Towards the end of production of Passages, we had a night shoot at a restaurant in the 9th Arrondisement of Paris for a scene in which Tomas (Franz Rogowski) and Agathe (Adèle Exarchopoulos) are having dinner with friends when Tomas’s husband Martin (Ben Whishaw) arrives unexpectedly. I find that nothing is harder to shoot than a dinner party, particularly if the characters are going to be stationary during the meal. We have our drawing, as well as a map of who will sit where around a round table, but after placing the table and chairs where we had planned for them to go, it’s obvious to me that it’s not going to work: the good shots that serve the scene are just not going to be there.

In the restaurant, there is a good feeling in the room: everyone’s happy to be in a comfortable location, food is being cooked, extras are outside smoking their last cigarettes. There is a general feeling that things are going as they should. I know, however, that is not the case, that time is passing quickly. The day will be over before we know it, and I still don’t what kind of table will be best (round, square, rectangle) or where the five actors in the scene will be seated. Until I figure that out, everything has stopped—the lights can’t be placed, the extras can’t be seated, the actors can’t be called. We are at a total standstill. Joseé has some ideas to offer, but I can sense future trouble in the editing room—too many singles, too much cutting—if I don’t figure out a better solution.  This is a moment that will come back to me for months to come in my dreams.  The moment of “not knowing” as the clock ticks, and you can feel the morning coming and, with it, the end of the shooting day.

Fortunately, I carry with me on set an iPad that contains every film that we’ve referenced in prep, and, when needed, I can go back to the films that inspired me in the first place. I retreat to a banquette in the corner and begin to look again at Pialat, Eustache, Nolot. I scroll at high speed, one film after the next, until I find what I’m looking for. In Pialat’s Passe ton bac, there is a scene of a large group of teenagers in a bar in the south of France, and I notice within the scene a shot of three kids together on one side of a table—a three shot—that solves my problem in a flash. I now know what to do: instead of a round table (with the option of one and two shots and over-the-shoulders), my five actors can be placed tightly on two sides of a rectangular table.  There will be a two-shot of Franz and Adele and then a three-shot of their three friends on the other side. The scene can cut between the two, and I will always have Franz and Adèle in the same shot, without needing a single.

And so, we are in motion again: the table is set, lights are being placed, actors are called to set, and before half an hour has passed, we have started to shoot the scene. As always on set—look at Truffaut’s Day for Night for a better understanding—a private drama, this time mine, has gone unnoticed.  If the scene works in the film, the images are what lasts, and everything else—all the preparation, all the doubt, all the moments of illumination—disappears.