Here is the first of two diaries from Rachel Libert, a producer and director who brought her project Semper Fi: Always Faithful to the Sundance Doc Film Creative Producing Lab.


I’m on my way home from the Sundance Documentary Film Creative Producing Lab and Summit and struggling to describe the experience. 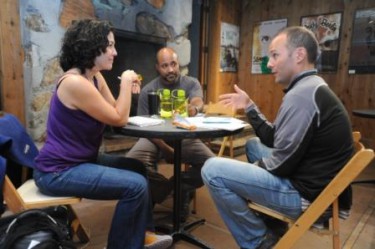 Nearly four years ago I was researching a documentary film about a public health organization and, while the idea was intriguing, it was becoming increasingly obvious that it was an impossible film to make. Before I graciously made my exit from the project I went to lunch with the Communications Director of the organization. At lunch she told me that her brother was in the process of exposing a Marine Corps cover-up of a toxic water contamination and asked me if I knew any filmmakers who might be interested in his story. As we sat at the lunch table, she laid out this incredible story of intrigue, heartbreak and betrayal. Two weeks later my Co-Director Tony Hardmon and I showed up in Washington DC to meet a gruff retired Marine on the mission of his life.

In that moment, we couldn’t have imagined that this would lead to receiving grants and support from the Sundance Institute and ultimately bring us to a fabled Sundance Lab. We are nearing completion of our film, Semper Fi: Always Faithful and what we’ve discovered at the Lab is that the finish line looks a lot different than it used to.

The lab began with a contemplation of the role of a creative producer. The discussion was led by Cara Mertes, the Director of the Sundance Institute’s Documentary Film Program. Something that really stood out for me was the notion that documentary funding and distribution is migrating from traditional broadcasting sources to a range of multi-platform media and technology. In this new paradigm, public engagement is not just crucial to extend the life of a film but critical to the creation of a film in the first place. Basically it’s not enough to have a film, a website and if you are lucky, a sales agent and distributor. This theme launched us into the three-day lab in which our amazing advisors, Jennifer Arnold, Josh Braun, Ted Richane and Joseph Tovares laid out this new territory.

Joseph Tovares from the Corporation for Public Broadcasting explained that even PBS isn’t satisfied with just a film and a website anymore. When you come to them for money you have to show the potential to reach and engage your audience beyond the broadcast. Sales agent extraordinaire Josh Braun shared stories from the sometimes exciting but often sobering world of documentary film sales. This reinforced the idea that we had to look beyond broadcast and theatrical sales in order to have a sustainable life for both ourselves and our films.

If you are like us you already feel stretched thin by making a film and a website. How can you even begin to plot a fancy outreach and engagement campaign? Advisor Ted Richane with Cause and Affect outlined a list of amazingly doable ideas from social networking (Twitter, Facebook etc..) to webinars that can help build a movement and an audience. Jennifer Arnold, director of the wonderful documentary A Small Act, described making her film and the incredible impact it has had. $1,500,000 has already been donated to the foundation featured in her film!

This leads me to my fellow Fellows: Dara Kell, Chris Nizza, Mike Brown and Megan Gelstein. The opportunity to connect and commiserate with other filmmakers doesn’t usually happen until you are at a festival and then you are just swapping war stories. At the lab you are grappling with similar obstacles and coming up with interesting solutions.

In addition to the information offered at the lab, we were given assignments that challenged us to face our fears and address our weaknesses. I went into the lab really nervous about presenting a “work in progress” of our film at such a prestigious place. Tony and I stumbled onto the plane to Salt Lake City after pulling several “all-nighters” in order to perfect our work sample. We even joked about whether they could take back the grant if they didn’t like our cut. We quickly learned that it’s not like that. Sundance Institute has created this incredibly supportive environment of advisors and fellow filmmakers who all want you to succeed and you can feel that intention behind every critique. And of course there are the intangibles of screening your rough work at the Sundance Resort. Where else can you have Robert Redford stroll into your screening and offer constructive criticism and commentary!?! Many of us are so used to selling our films and having to project an air of confidence that taking the leap towards vulnerability might be one of the most valuable lessons from the lab.

In my next installment, I’ll tell you about the Creative Producing Summit which happened right after the lab. — Rachel Libert

Rachel Libert (Producer/Director) is a New York-based director. Her critically acclaimed documentary Beyond Conviction premiered in competition at the Los Angeles Film Festival and was broadcast as a primetime special on MSNBC and featured on the Oprah Winfrey Show and the TODAY Show. Libert made her directing debut with the award-winning short film Undertaker. This film premiered at the Sundance Film Festival, screened at thirty film festivals worldwide and aired on Lifetime Television. It received many awards including a Golden Spire from the San Francisco Film Festival and a national CableACE award for best dramatic short film. Her broadcast credits include work for MTV, Discovery Health, HBO, Court TV, Food Network and Oxygen. She is currently the Executive Producer/Creator of a documentary series for DISCOVERY/Planet Green which follows the effects of an oil boom on a small town in North Dakota.