CONOR HORGAN ON POST-APOCALYPSE AND ONE HUNDRED MORNINGS 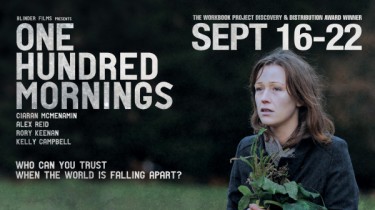 There’s an old saying, that you should write what you know. I think you should also write about what scares you, and the world we’ve created in One Hundred Mornings scares the hell out of me. As we prepare for our week of screenings at the Downtown Theater, I’m reflecting on some of the real-life inspirations for the film, and what motivated me to make it.

The first question I’m usually asked after a screening of the movie is “Do you have an idea what happened in the film to cause the breakdown?” My answer is usually “Yes.” I’m not being disingenuous — I have good reasons for not putting an explanation for what has caused the breakdown into the film. I wanted to make a film about how we tend the deal with the consequences of our actions, and we all already know which of our actions are going to have the most challenging consequences. I also knew from other post-apocalyptic films that no matter how you set out the premise of how the world of the film came to be, a section of the audience would quite likely spend the first half of the film locked in a silent, internal argument about the plausibility of that particular set of circumstances happening in such a way and at such a time. I think that kind of internal chatter can often in itself be a form of denial, a way of avoiding a larger and usually far more inconvenient truth. So I didn’t set out to make a cautionary tale about an easily-avoided catastrophe — I wanted to make a realistic portrayal of what a societal breakdown might actually feel like, and how it would affect a group of very human characters.

The characters in the film are hugely important to me — as well as being distict characters in their own right, each of them reflects a part of myself, and how I might deal with the various situations, and I’ve learned that many other people can see themselves very clearly in the four of them as well. Realising those characters was a very enjoyable part of the process, and it was a relaxed atmosphere right from the start of rehearsals. However, there was one thing I was absolutely adamant about — there were to be no heroes and no villains in the film, just some very human people trying to deal with extraordinary circumstances. I’m really proud of how the actors embraced that, and how they made the film with me.

As I’ve taken part in post-screening Q&A’s, I can see different reactions on people’s faces, especially as the discussion turns to the breakdown. Some people are engaging fully with the implications of the film, while others are looking for a happier ending, trying to interpret the events so they don’t need to ask themselves some difficult questions. I find myself wondering if Margaret Atwood looked out over a similar sea of conflicted faces when she gave a talk in Dublin that I attended in late 2005. The event was in support of a reworking of the Greek classics she’d just published, but I know I wasn’t the only person there to sit up when she started speaking about some of the current challenges we face. She spoke clearly and knowledgably about how she’s been aware from an early age (her father is an eminent natural scientist) that “any species that outgrows its resource base won’t survive.” Very simply, and devastatingly put. She referenced a book for those members of the audience that wanted to find out more (A Short History of Progress by Canadian author Ronald Wright) and I’m sure that I wasn’t the only one who rushed out the next day to get a copy. I’m also sure that there were many members of that audience who somehow tried to stuff that knowledge back into their subconscious in an attempt to remain unbothered by it. When I think about it, those are the people who I really hope will get to see One Hundred Mornings.

I’ve been interested in the larger picture outlined by Atwood for some time, but it was only in the last few years that I really started to do the research and find out just how precarious most civilisations are — how easily and quickly they can fall, often when just one of the supports fails and the others follow in rapid succession. One of my childhood memories of a trucker’s strike in the UK was hearing the rather chilling estimation that all civilised societies are nine meals away from anarchy, and for more recent examples I needed look no further than the aftermath of Hurricane Katrina, where within days the remaining police in New Orleans had become no more than the best organised and best armed gang in town.

Of course, like many of us, one of the reasons it had taken so long for me to do this research was because a large part of me just simply didn’t want to know. It’s like putting off writing your will — a primitive part of the brain keeps telling you that acknowledging your inevitable death might somehow bring it closer.

But the books and blogs I read weren’t just material for a film, they had huge implications for my life and that of my son. So I can understand the people who’ve confronted me with their response to One Hundred Mornings, protesting loudly that a relatively easy way forward will undoubtedly be found because it has to be found. And the more I thought about the question of would I do in the event of a societal breakdown, the more I wanted to make a film that showed what it really would be like. It’s probably not going to be an exciting new world, where all the normal rules don’t apply and I can drive around the countryside doing whatever I want — it will much more likely be a time of not knowing what the hell is going on and being woefully underprepared to boot. Alex Steffen from worldchanging.com put it very well in a 2004 post called “Night, Hoover Dam”: “Real apocalypses are sordid, banal, insane. They present not a golden opportunity for lone wolves and well-armed geeks, but a reality of babies with diarrhea, of bugs and weird weather and dust everywhere, of never enough to eat, of famine and starving, hollow-eyed people, of drunken soldiers full of boredom and self-hate, of random murder and rape and wars which accomplish nothing, of many fine things lost for no reason and nothing of any value gained. “

And what will I do if things start to come asunder? I still don’t have an adequate answer for that one. I do know one thing, though — making this film has made me very grateful indeed for all of the benefits of the kind of world we live in. My greatest hope is that we come to terms with the fact that, as Steffen says, “Of all the lies we tell ourselves, this is the biggest: that there is any world worth living in that involves the breakdown of society.”

For a long time this film was something I felt compelled to make. I didn’t think that movies could change the world — if that were the case, the world would be a very different place — but I did feel that they can focus attention where it needs to be focused, and at least if the film helped others experience in some way what probably lies ahead, they might be a bit more prepared for it. So you can imagine how pleased I was to see a recent Facebook update from an Irish film festival programmer : “Am boiling spuds grown in my own raised beds, a project inspired by the film 100 Mornings. If you see it, you’ll understand” — Conor Horgan