by Zachary Wigon
in Filmmaking, Post-Production
on Sep 22, 2010

Editor’s Note: Part one of this essay, “Things That Seem Real: A Three-Part Essay on Catfish and Other Movies,” appeared yesterday on the site and can be read here. These essays contain major spoilers regarding the film Catfish. 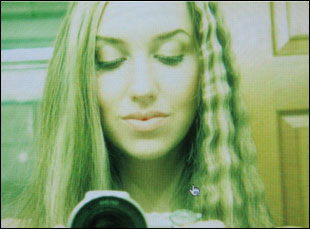 Over the course of an eight-month relationship that contained no physicality, Nev and Megan stayed in touch constantly. Using email, Gchat, Facebook walls, text messaging and phone calls, they pushed the boundaries of what are commonly understood to be the limits of an online-only relationship. Megan tells Nev about her family and the horses she takes care of. Nev fills Megan in on the quotidian details of his life. They fantasize about how easily they could fall into a relationship upon meeting one another. They send illicit text messages back and forth.

For Nev, the appeal of Megan is obvious: she’s utterly gorgeous, for starters. With model good looks and a down-home Midwestern charm, it’s not difficult to see how a hip metropolitan fellow like Nev could drop his defenses for her. Young and uncorrupted, there’s something seductive about her innocence. She’s a talented singer as well. And who could blame Megan for falling for Nev? Also good looking, he’s a skilled photographer who’s thriving in New York City. Clearly ambitious without being annoyingly so, he possesses an effortless charm.

There’s just one small glitch in the scenario: Megan doesn’t exist. She’s a pieced-together creation of Angela, a housewife in Michigan. The photos that adorn Megan’s Facebook profile have been taken from the account of an unknown stranger named Aimee Gonzales. Megan’s sexy voice is merely Angela with some softer, quieter alteration. The songs she records and sends to Nev are, in fact, random covers that Angela has found all over the internet. Megan’s “house” is abandoned — when Nev finally drops in for a surprise visit, he finds the mailbox filled with all of the postcards he’s sent. Megan is a ghost, she’s a phantom made of vapors.
It may be a jarring moment for viewers when they realize that Megan does not exist, but Megan and Nev’s story is hardly new, cinematically speaking. Characters in films have been falling in love with artificial constructs for practically as long as movies have been around. Think about any film noir, any bad espionage film (and for that matter, many conceptual romantic comedies — like Heartbreaker, another film about falling in love with someone who doesn’t exist, which came out September 17th) — have we not heard the line “but falling in love wasn’t part of the plan” ad nauseum? 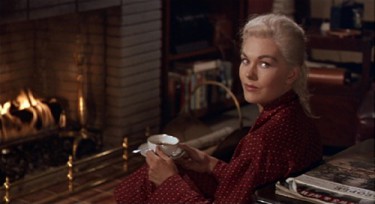 “But falling in love wasn’t part of the plan” may by now be a horribly clichéd trope in films where one character falls in love with another who turns out to be not what they seem, or where one character who is not what they seem falls for someone who is unaware of their true intentions. Yet it is a central quote in the ur-film of this subgenre, and perhaps the ur-film of cinema, period, Alfred Hitchock’s Vertigo. “He planned it so well,” Judy writes of Gavin Ellster in the letter to Scotty that she will soon rip up. (No explanation necessary, I presume — if you haven’t seen Vertigo, surely you are on the wrong website.) “He made no mistakes. I made a mistake. I fell in love. That wasn’t part of the plan. I’m still in love with you. And I want you so to love me. If I had the nerve, I’d stay and lie, hoping that I could make you love me again as I am, for myself, and so forget the other and forget the past. But I don’t know whether I have the nerve to try.”

Vertigo is almost a literal narrative adaptation of the Jacques Lacan quote that “Love is giving something you don’t have to someone who doesn’t exist.” Scotty falls in love with a woman — Madeleine Ellster — who literally does not exist, who is a creation of Gavin Ellster and his mistress, Judy Barton. Dressed up like the real Madeleine (whom we never meet), with her hair dyed the same platinum blonde, Judy is an avatar-Madeleine, a creation upon which Scotty can easily endeavor his own fantasies and desires — because Judy has been coached to pretend to fall in love with him, to be receptive to those desires. Of course, action always begets belief (think of Pascal’s advice that doubting subjects should get down on their knees and pray, and they will find belief), and in pretending to fall in love with Scotty, Judy actually does fall in love, making Scotty all the more ensnared in Judy and Gavin’s ruse. He becomes so wrapped up in it that when, after Madeleine’s death, he meets a woman who looks quite a bit like her (in the film’s second half, which Chris Marker has compellingly argued is a dream that Scotty has in his mental institution), he stops at nothing to not-so-subtly make her over as Madeleine. This is all the more complicated by the fact that this woman is Judy Barton, the very woman who played Madeleine in the first place — and so Scotty attempts to refashion the woman who accidentally fell in love with him as the woman who she created who he fell in love with, who in fact never actually existed.

Catfish demonstrates that the cinematic tradition of falling in love with someone who doesn’t exist is alive and well, over 50 years later, and can have new life breathed into it despite the clichés associated with the gambit. Angela and Scotty have more in common than one might realize at first glance. Like Scotty, Angela tries to create the perfect woman (Megan), a woman who by definition cannot exist. Like Scotty, Angela’s creation is predicated upon a need for self-deception, as well as the deception of a loved one. Like Scotty, Angela wishes to construct an artificial being who will enable her romantic fantasies to come true.

However, there are key differences. Whereas Scotty re-creates Madeleine in order to conjure up a love he had (or at least thought he had), but lost, Angela creates Megan in order to conjure up a love that would have otherwise been impossible. Scotty, as Marker has noted, is trapped not only in a vertigo of space, but in time, and is unable to keep himself from falling dizzyingly back into the past; his re-creation of Madeleine is what enables his fantasy of the past to seemingly still exist. Angela’s confusion — her vertigo, if you will — is not one of time, but of the fantasy/reality barrier. Spurred on by the internet’s potential for rewriting one’s own life, Angela has created a new person so that she might enable her fantasy of a different life — one where she is a talented artist dating an equally talented, hip New York photographer — to come into being. 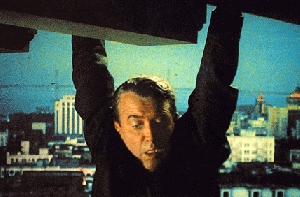 Additionally, Scotty’s deception is primarily a self-deception — he knowingly turns Judy into Madeleine so that he can relive a past that he knows is gone, yet on some level chooses to believe in a future for anyway. Judy, fully understanding what is going through his mind, allows herself to be his pawn, out of pity, as well as guilt for what she has done to him. Angela’s deception is both the deception of someone else (by making Nev fall in love with someone who doesn’t exist) and a self-deception; she is both Judy/Gavin and Scotty at the same moment. Her deception of Nev is the obvious one; her deception of herself is slightly less so.
In creating Megan, and entering into a digital relationship with Nev as Megan, Angela has tricked herself, on some level, into believing that she (Angela) is the object of Nev’s affection. Even as she is knowingly deceiving Nev, she is warping who he is, from her perspective. Like looking at an object from an odd angle in a convex mirror, she is seeing Nev through someone else’s eyes, rather than her own — she is seeing him as he would behave when in correspondence with a beautiful young musician, who takes care of her horses on her horse farm. Megan may not exist, but neither does the Nev that Angela has been corresponding with; that Nev is as much a fictional creation as Megan. He is a response to who Megan is, not a response to Angela herself. In attempting to deceive Nev, Angela has enabled him to become someone who is out-of-joint with Angela’s own existence, a sort of heterogeneous element that has not been constructed for Angela’s orbit.

Why, then, is the myth of falling in love with someone who doesn’t exist so prevalent in cinema, and so wildly effective? Any number of formalist arguments could be made regarding the nature of the cinematic medium; how we, as audience members, are in effect constantly falling in love (as well as being manipulated to hate) characters who do not exist, phantoms who live onscreen for two hours and then vanish. Watching a movie is an intoxicating experience, and the disconnect between what goes on in that darkened theater and the real world is often difficult to grasp; it’s part of the reason that there is always a market for a candid photo of Brad Pitt or Julia Roberts in a shopping mall or on the beach. On some level, we are unable to believe that the characters they’ve played, who we’ve fallen in love with, are not real people.

Yet there’s another reason this storyline is so effective, one more based in reality than the inner workings of cinema. It’s that it happens to all of us. The story of Nev and Megan’s relationship, of Scotty and Madeleine’s, is merely an extreme version of what occurs in every romance. It’s the natural coordinates of dating taken to their logical endpoint. When dating, when entering a serious relationship, when falling in love, we never bare ourselves to our significant other. That’s an act that takes years of intimacy and commitment to seriously do, if it’s done at all. When dating and then falling in love, we edit, construct, and otherwise modify our personalities so as to engineer a positive outcome, to manipulate the other person into falling for us, to make them see in us not who we are, but who they want us to be. We attempt to fashion ourselves into their object of desire. Consciously or not, it’s an unavoidable process. When you consider that both people in the relationship are doing it at the same time, you begin to see what resonates in the stories related above. It’s two people generating fiction while they grasp in the dark for something that feels like what they’ve been searching for. Joan Didion once said “We tell ourselves stories in order to live.” Indeed, but additionally, we tell stories about ourselves in order to love.