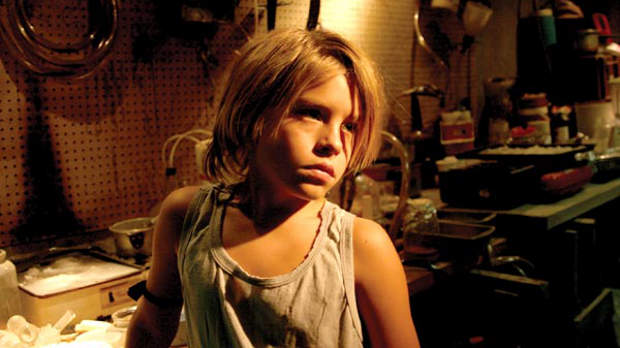 Years ago, before I worked in film, I was a curator and programmer at The Kitchen, New York’s center for contemporary performance and video. In my first year there, the organization produced a one-off TV special entitled “Two Moon July,” and in it David Byrne performed a work of solo performance art that involved the Talking Head running in giant circles through The Kitchen’s Soho loft space, chanting out the names of future movies culled from the AFM issue of Variety. It might sound a bit slim, but it was a nice piece — there is something oddly poignant and culturally optimistic about all the cinematic potential that lies within the margins of those sales listings.

It wasn’t until I moved into film production that I realized that with that poignancy and optimism came the pain and heartache produced by all those film projects that never see a first-day’s call sheet. Witness, for example, the recent high-profile flame-out of Terence Malick’s Che, which would have starred Benicio del Toro. The production — for which production personnel had been hired, some of whom had given up their U.S. apartments for the summer and moved down to Ecuador for the shoot — was halted when Malick, who had been pitting two groups of producers against each other for his services, pulled out to direct another film, The New World, for New Line. (A U.S. distribution deal was apparently the prize both producers were seeking; Che hadn’t come up with one yet.)

But occasionally I do experience Byrne-like moments of optimism, and I slid into one recently as I put together a list of films in production, pre-production, or just out of post for Filmmaker to track in the months ahead. I am optimistic about each of the below films for various reasons. While I haven’t seen any of the films listed here, I have either read the scripts, know the filmmakers, or know something about the production and the footage, and I think that they might be pretty special.

1. The Heart is Deceitful Above All Things. I’m a big fan of Asia Argento’s first film, the brash and brutal coming-of-age tale, Scarlet Diva. For her follow-up, she’s adapted J.T. Leroy’s collection of short stories which features a young protagonist not dissimilar to the one found in his acclaimed debut novel Sarah. So, while Sarah tosses around from Gus Van Sant to Steven Shainberg to direct, Argento finishes her film, which was shot in the fall and features Asia as the mother Courtney Love would kill to play along with Peter Fonda, Ornella Muti, and Elephant‘s John Robinson.

2. Down in the Valley. Ed Norton recently signed on to David Jacobson’s Sundance-Lab project, Down in the Valley, the follow-up to his surprisingly subtle indie serial killer movie Dahmer. The new film is about two teenage siblings and a stranger who comes to town. This time, though, the town is contemporary L.A. and its suburbs, and the stranger is an odd Jewish cowboy.

3. The Weather Man. When Steve Conrad’s script went out as an open directing assignment, every indie director wanted it. But the job went to Gore Verbinski, who is hard to argue with after his Ring-Pirates of the Caribbean winging streak. And suddenly a small-scale, post-American Beauty tale of a Chicago weather man trying to reconnect to his family while pursuing a job at “Good Morning, America” attracted Nick Cage and a decent-sized Miramax budget. Both Cage and Verbinski can certainly do good work with the offbeat comedy and real pathos found in Conrad’s screenplay.

4. Palindromes. Solondz is another director who, after making his previous film, Storytelling, for a studio (New Line), has seized all controls for his next. Again, I know little about it except that the great Tom Richmond shot it and that playwright Steven Adly-Guirgis stars in it alongside Ellen Barkin.

5. Innocence. Lucille Hadzihalilovic’s Innocence is a parable of female adolescence set within a mysterious, other-worldly boarding school for young girls. The Paris-based Hadzihalilovic’s previous film, La Bouche de Jean-Pierre, was produced and shot by her partner, Gaspar Noe and dealt with pedophilia. The new film, pictured at right, is a kind of magical fairy tale for adults and looks to be quite different in tone while retaining the cool formal control of her previous work. Look for it to be somewhere in Cannes this year.

6. Neo Ned. I’m very curious what’s up with this film, which stars Jeremy Renner and Gabrielle Union. Directed by Van Fischer and written by Wentworth Vaughn, the story, about a neo-Nazi imprisoned in a mental hospital who falls in love with a black woman who thinks she’s Adolf Hitler, has a log-line that sounds a bit over-the-top in a particularly indie kind of way. But the screenplay for this strange, edgy and ultimately quite beautiful romance is really good…

7. The Girl from Monday. After the Zoetrope-produced No Such Thing, Hal Hartley and longtime colleague, editor and now producer Steve Hamilton of the post-house Mad Mad Judy went back to their indie roots and put together this beautifully-titled film which Hartley calls “a fake sci-fi about the way we live now.” It’s currently in post.

8. Haven. This debut feature from Frank E. Flowers, a young, hustling writer/director from the Cayman Islands who bounced from a decent short to a well-financed Lions Gate feature starring Bill Paxton, Orlando Bloom, Agnes Bruckner, and Raising Victor Vargas‘s Victor Rasuk, also has a sharp script. It’s the story of a white-collar criminal who must flee abruptly to the Cayman Islands with his teenage daughter. There’s the proverbial suitcase-full-of-cash, but much of the story is a gentle teen romance set in a unique setting. When I met him, Flowers had the mixture of charm and drive that made me feel he could pull off something interesting.

And then there’s one more film to look forward to: Che, this time directed by Steven Soderbergh, who has committed to replace Malick and begin the project in summer, 2005.