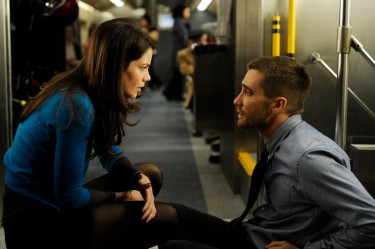 The smart action thriller is the second feature from SXSW Alum Duncan Jones (Moon), and stars Jake Gyllenhaal (Love and Other Drugs, Brokeback Mountain), Michelle Monaghan (Eagle Eye, Due Date), Vera Farmiga (Up in the Air, The Departed) and Jeffrey Wright (Quantum of Solace, Syriana). The South by Southwest Film Conference and Festival runs March 11 – 19, 2011 in Austin, Texas.

When decorated soldier Captain Colter Stevens (Gyllenhaal) wakes up in the body of an unknown man, he discovers he’s part of a mission to find the bomber of a Chicago commuter train. In an assignment unlike any he’s ever known, he learns he’s part of a government experiment called the “Source Code,” a program that enables him to cross over into another man’s identity in the last 8 minutes of his life. With a second, much larger target threatening to kill millions in downtown Chicago, Colter re-lives the incident over and over again, gathering clues each time, until he can solve the mystery of who is behind the bombs and prevent the next attack.

Opening in theaters nationwide on April 1, 2011, the film was written by Ben Ripley. A Mark Gordon Company production, and presented by Vendóme Pictures, the film was produced by Mark Gordon, Philippe Rousselet and Jordan Wynn, with Hawk Koch, Jeb Brody, and Fabrice Gianfermi executive producing.

“We are delighted to welcome Duncan Jones back to SXSW. His debut Moon showed an intelligence, skill, and exceptional use of limited resources that’s exactly the kind of filmmaking we love to support,” said Film Conference and Festival Producer Janet Pierson. “Source Code is a terrific follow-up; it’s a smart, suspenseful thriller, and a perfect fit for our 2011 Opening Night!”