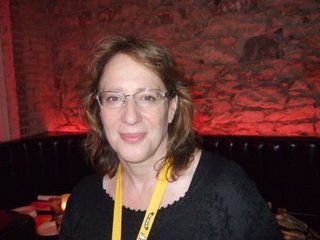 The goal in any festival director transition: to maintain the quality of a festival and begin to put one’s personal stamp on it while not slowing its momentum or dampening its good will. Mid-way through SXSW, I’d say that for new director Janet Pierson, pictured here at the BMI dinner, that mission has been handily accomplished. Attendance is up; audience reaction to a good number of films is positive; the panels are informational and packed; there’s the requisite fanboy buzz from the opening night I Love You, Man plus today’s sneak of some of the Bruno footage; and there are even bits of controversy here and there, like the heated Q and A that followed Brett Gaylor’s RIP! documentary. Congratulations to Janet on what so far has been a very good SXSW.