by Mary Anderson Casavant
in Sundance Features
on Jan 18, 2011 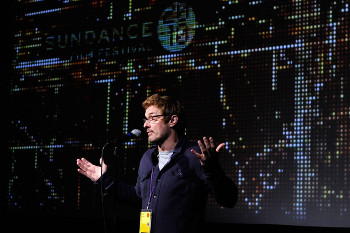 For the independent film industry, January isn’t just the start of a New Year, it’s also exam season. At this very moment, documentary filmmakers around the world are in edit rooms deep into the night, hoping to ace the Sundance finals. The reward for those late night cram sessions is certainly worth it: the most gifted alumni of previous festival’s have been awarded the best graduation gift of all — a career as a working filmmaker. To find out more about this year’s class, I spoke to David Courier, Senior Film Programmer at the Sundance Institute.

Filmmaker: I noticed a lot of names in the catalog this year that I recognized from previous festivals. Do you and your colleagues purposely reserve slots for filmmakers you know and trust?

Courier: It’s interesting you ask that, particularly this year… People love to premiere at our festival because we love documentaries; they’re on par with narratives here. This year, we made a big decision to make a documentary premiere section, which is the equivalent of the narrative premieres section…Last year we came to realize that we needed to make a place for master documentarians alongside a space for new directors. Many of the names you have heard of are probably in our doc premieres section; they are filmmakers who have won the Oscar or have been here many times. This year, they’re out of competition, and our doc competition this year has less big names…It’s not the list of Oscar winners that we had last year.

Filmmakers: One of the big stories of Sundance last year was Catfish, a truly microbudget documentary that caused a big splash. Going into the festival, do you have an idea of what might be the break-out film?

Courier: We definitely didn’t predict Catfish. You just can’t predict things like that. We watched it happen at the festival. We loved the movie, which is why we programmed it. But what’s interesting this year is that if people look at our documentary competition, they’ll probably notice that the topics are lighter. It’s not like we set out to lighten things up, though. It just kind of happened. And yes, there are films like Catfish that could take off and shock us by becoming part of the zeitgest.

Courier: Well, Resurrect Dead, this documentary about these mysterious tiles that have popped up on the streets of Philadelphia and South America. It’s about the filmmakers trying to find out the story behind these crazy tiles. But you never know how the films will play — it’s probably not something you should talk about ahead of time.

Filmmaker: Does the festival feel a responsibility to program a range of films, one that reflects larger documentary trends?

Courier: We definitely see that as part of our job. We try to program a variety of topics so we are covering the range of what is out there. We like to have a program that has some scope so we definitely have political documentaries, social-issue docs, music docs, sports docs and just pop-culture stuff. It’s always a very wide range, but it’s even wider this year.

Filmmaker: You watch a lot of documentaries. Have you noticed any trend from all the films you watched this year?

Courier: Documentary filmmakers are becoming freer to tell a story and to do what they want to do…There used to be a lot of talking heads and experts…but now people are taking their personal journeys and sculpting them into something, like a thriller. I know there was a lot of controversy about Catfish and whether the filmmakers were being honest. I don’t know what the answer is, but I do know that it’s a riveting film.

Filmmaker: It’s true, last year was a big year for documentaries that were popular but got accused of playing fast and loose with the facts. Catfish and Exit From the Gift Shop both come to mind. Are there any docs this year that might cause a similar controversy?

Courier: I don’t know that there’s anything this year that is going to cause that kind of controversy. There’s Shut Up, Little Man!, a doc about two guys who rigged up a microphone and taped their neighbors, who happened to be two older alcoholics. One was a raging homophobe and the other was a gay guy. They’d have these fights all the time, and one would scream, “Shut up, little man!” Unbeknownst to them, they became a viral sensation, so this film gets to the bottom of how this whole phenomenon happened.

Filmmaker: As the senior film programmer, how do you approach the process of narrowing down a huge number of submissions to just a chosen few?

Courier: We’re unique at Sundance in that there’s not one programmer of any section. There are seven of us, and we all program everything, but we do specialize. Caroline Libresco and I oversee all the documentaries, so we hone our list. Then we have these weekly meetings where we watch everything on the list and fight it out in the room. There are certain moments where it’s just a slam dunk with everyone. We do stay conscious of mixing it up and not having too many films on the same topic. It breaks our hearts, but we have to say no to films that we loved. I could do an entire second festival of films I love.

Filmmakers: For filmmakers currently working on docs right now, do you have any recommendations about things not to do, clichés to avoid?

Courier: There’s a trend now that bugs me — filmmakers putting themselves in their films for no reason. If it’s a personal story, of course, it makes sense, but if they’re in it and there’s no reason for them to be in it, it drives me buggy… Let the story tell itself. Also, voiceover narration is kind of a cliché of documentary filmmaking, but sometimes it’s the best way. However, it should never be redundant to what we’re witnessing… If you have to use it, make sure it lends some other element.