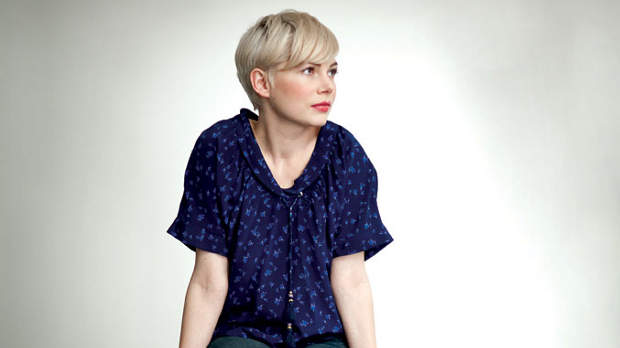 This piece was originally printed in the Winter 2011 issue. Meek’s Cutoff is nominated for Best Feature.


Encompassing a diverse range of roles, 2010 was a banner year for Michelle Williams, one of the most gifted actresses working today. She began the year at Sundance with Derek Cianfrance’s acclaimed drama Blue Valentine, where she plays Cindy, a woman falling out of love with her husband (Ryan Gosling). After the film gained attention for its surprising NC-17 rating by the MPAA, it was released at the end of the year with a won-on-appeal R rating, and Williams’s gripping performance garnered her a Golden Globe nomination. In February she had a small but pivotal part in Martin Scorsese’s studio thriller Shutter Island, playing Dolores, whose mental illness and ghastly death drives her U.S. Marshall-husband (Leonardo DiCaprio) to madness. Then, lastly, in the period drama Meek’s Cutoff, her second collaboration with neorealist Kelly Reichardt, Williams plays Emily, a tough-minded settler who along with her husband and two other couples become hopelessly lost while on a wagon train searching for gold. The film premiered at the Venice Film Festival and Oscilloscope Laboratories opens it this April.

As she did in her previous Wendy and Lucy, Reichardt crafts a character for Williams that downplays her exquisite beauty and accentuates her ability to convey worlds of meaning  with looks and gestures. Williams, 30, says she enjoys working with Reichardt because the director is headstrong about her cinematic intentions, but Williams also admits that what’s even more gratifying is the sense of camaraderie she has with Reichardt, a rarity in a profession where moving quickly in and out of people’s lives is routine. “I like to feel connected and feel part of a community, but I’m an actor so I’m kind of a gypsy,” she says over the phone. “But playing another character for Kelly made me feel that my life wasn’t just a series of good-byes.”

Here Williams delves deeper into working with Reichardt and the challenges of getting in and out of character. The most recent one she’s trying to shake: Marilyn Monroe. — Jason Guerrasio

How did Kelly approach you with Meek’s Cutoff? The story came fully formed. She and Jon [Raymond] worked on it and then she brought it to me. I come late in the game. She had been teasing me for a while; she sent me a postcard from Oregon and it’s a picture of the salt flats. On the back she just wrote, “Meet me here.” I have it taped to my wall next to my bed.

Was it difficult to get into the Emily character after the intensity of the Cindy character in Blue Valentine? It did take me a while to shake Cindy. I wasn’t able to take the wedding ring off that I wear in the movie until two weeks after we stopped shooting; I just couldn’t bring myself to do it. I think I must have had only a month in between jobs because I had a whole comedown process for Cindy and then I had a whole prep period for Emily.

What did you do to prepare for Emily? It was a lot of familiarizing myself with the journals that the women wrote during their time on the trail. Luckily, I like doing this kind of stuff. A great portion of my life takes place in the country, so things that I needed to learn for Emily are things that I in my real life are trying to learn. [laughs] Self-sufficiency, getting by without a man to help, and a lot of my progression was also physical — learning how to bake bread so it didn’t look clumsy, shooting, loading and firing a gun, target practice. I like this Emily Dickinson quote, “I’ll walk where my own nature would be leading.” I like that for the Emily character very much.

Was there more flexibility to shape your character in Wendy and Lucy, where you played the lead, compared to Meek’s, where you’re part of an ensemble? It was a very similar process. Kelly knows what she wants. Possibly more than any filmmaker I’ve worked with. It’s a place where I feel my ideas are always welcomed, but Kelly is very specific about what she wants. For Wendy I had a lot of ideas and Kelly said yes to two of them — thank God because boy, did I have some stinkers. But the thing is that I felt comfortable bringing her my most embarrassing middle of the night, off-the-cuff ideas and she felt comfortable sharing with me what her day was like, what her struggles were as a filmmaker. Sometimes when you’re making a movie and you’re an actor it’s like being a child in a household. There is so much information kept away from you because people want to baby you or perhaps think that they’re protecting you. But instead it makes you very anxious because you know that there are things going on above your head and you can’t define them and that leads to anxiety and fear. Kelly isn’t like that with me. She shares everything, the petty grievances, the larger concerns, the budget, the lighting —  whatever it was we were in it together. She felt comfortable taking me to those places so I in turn felt comfortable taking her to my dark places, and ideas come out of that. You have to be willing to muddle through mistakes, mess, ugliness, bad ideas, embarrassments to get to something that’s worthwhile. Like, for Wendy I said, “A limp. Let’s give her a limp.” I mean, I needed something to do. And Kelly, rightfully so, said, “No, but keep thinking and get back to me.” So I did and the limp was whittled down to an Ace bandage around Wendy’s ankle. So there’s a process.

So how does creating a character with Kelly differ from, say, creating Cindy for Blue Valentine? With Kelly my goal all the time is how do I fill her frame? How do I understand the world that she wants me to inhabit down to the minutia? And I feel like if we are successful as a team that’s where it lies. But for Blue Valentine, for Cindy, I was at sea and that’s two different styles of working, two different styles of directing, both equally valid and exciting as an actor. Derek [Cianfrance] would have let me put on a dog costume and start barking and said, “Okay, let’s explore it.” That’s not the case with Kelly.

It seems you’ve picked up your workload from years past, would that be correct? No, my goal is to work once a year but my life and my work is also about falling short of my goals. It’s aiming high and falling short and not pinning myself up for those mistakes but knowing my aim is true. My aim is to work once a year. I wound up working twice this year and twice last year but I mixed in small films, and two small movies equal one big movie, I guess. [laughs]

When you’re considering projects, what does it have to have for you to become interested? I’m open to anything. I don’t know, as other processes in my life have sputtered and fallen and died at my feet and I don’t know how to make them work anymore, my decision-making process has remained intact. The way I make a decision is if a script hits me the first time I read it. Does it physically affect something in my body or not?

Though Wendy and Emily are vastly different, they are both searching for something. Is that a coincidence? Kelly wouldn’t talk to me about it. Anytime I would try and say, “How is she different than Wendy?” She would go, “Michelle! She’s nothing like Wendy, we’re not having this conversation.” I had actor’s nerves about repeating myself and also because they’re both in the position of being the watcher I didn’t want to take a passive approach this time with Emily. So it was on my mind but not Kelly’s.

Emily is certainly less of a watcher. Good. Whew.

But there’s also anonymity in both roles, too. Is it fun to play characters that blend in with their surroundings, don’t stand out; characters that are vastly different than what you have to deal with in real life? Well, if I really can’t have that in life then I have to quit. If I can’t watch then I can’t work because I wouldn’t have any source material, I wouldn’t have inspiration, I wouldn’t have any connection with people outside of myself. So I find that I can still have that in some places and to some extent. Not in Los Angeles or Brooklyn, but the world is wide and there are many places to go. But it did appeal to me enormously. I thought a lot about how Wendy as a person behaved when they thought she was invisible. Wendy gets to the point where she is stealing cans of dog food in the grocery store. I think she was able to do it because she had some kind of cloak of invisibility surrounding her. It’s when you’re not performing for anybody. There’s an extent of performance in all of our lives. We’re trying to affect people with our stories or make them see our point, make them feel our situation, and Wendy, and to an extent Emily, don’t have that. They aren’t allowed that because they’re in a position where they have been taught either by society or by experience that their feelings don’t matter.

Are you through with filming My Week with Marilyn? Yes.

Have you been able to comprehend yet that you played this icon? I might be able to answer that question in a year; I think I’m still in shock. It wasn’t that long ago we were shooting. I was still filming it two weeks ago. It’s still very much in my head.

What are the tricks you do to get out of character? I hate saying good-bye, I hate saying good-bye to people and I hate saying good-bye to characters. I don’t know why. With Cindy it took me two weeks to take off the wedding ring, with Wendy sometimes I still think about where she is, if she ever got back to the dog. But really it’s just time. And I’m lucky because I do like my life when I go back to it. I go back into my life wholeheartedly but there’s still some part of me that are still attached to the characters. I don’t think it would be noticeable to my friends. It’s a feeling in  me. I guess in some ways you never really let go.t