by Scott Macaulay
in Distribution, Filmmaking, Financing
on Feb 28, 2011

“We want to encourage people to make good documentaries because we feel like there’s not enough good explaining in the world.” That’s The Economist Film Project’s editorial director, Gideon Lichfield (pictured right), about the recently announced partnership between the British weekly and the PBS News Hour. Beginning April, that “good explaining” will arrive in the form of segments on the PBS News Hour that will include six-to-eight minute clips from full-length and short documentaries as well as related discussions by the anchors, outside experts and, sometimes, the filmmakers. 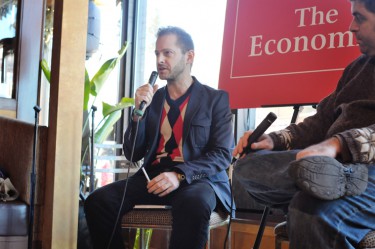 The Economist Film Project is currently in the midst of a submission campaign that will extend until January, 2012. Films will be curated by an editorial team drawing from both The Economist and PBS, and selected films will receive $4,000 grants intended to cover the cost of preparing the short broadcast edits. According to its website, “the project will feature films whose new ideas, perspectives, and insights not only help make sense of the world, but also take a stand and provoke debate.” “Obviously film can do that in ways 600-word articles can’t,” adds Lichfield. “So one of our goals is to encourage filmmakers [to make] the kind of films that stimulate intelligent discussion, and to explain things in ways that give [the audience] insights. And, I suppose you could say that that jibes with The Economist’s more general mission of making the world a more intelligible place.” Films that advocate a specific point of view are welcomed “as long as they give some credence to the other side, or provide the context for why one point-of-view is different from another. And they don’t have to be from a position that agrees with The Economist, obviously.”

More than 300 films were submitted just in the first month since launch, says Lichfield, and three particular themes have appeared frequently. “The first is civil conflict,” he says. “In Korea, specifically, there are stories about issues between older and younger generations and North/South issues. And there have been lots of stories about struggling developing nations in Africa, and several on the wars in Iraq and Afghanistan, often from soldiers’ perspectives. [The second theme] revolves around women’s issues of all kinds, particularly around development in Third World countries, reproductive rights, social rights, and family employment. And then there are U.S. issues — obviously a big segment — and a lot of that has not surprisingly to do with the recession and the financial crisis.”

Joining Lichfield will be The PBS News Hour’s Managing Producer, Patti Parson, who will also serve as editorial director. Says Lichfield, from the first batch of viewing “we’ve actually come to quite divergent conclusions. As we get going, we’re refining our criteria and getting a sense of what we agree on. The Economist and PBS Newshour have different editorial viewpoints sometimes, so we won’t agree on everything, but we’ll reach a consensus.”

“We want this to be a global project, and we want submissions from all over the world,” he continues, “but there is a preference for films in English whenever possible.” As for the types of filmmakers sought, Lichfield says, “I’m hoping to get a mix, and I hope we get new filmmakers too.”

Lichfield, who is a deputy editor at The Economist, comes to The Economist Film Project after 15 years with the weekly. “I started on the science desk and then became a foreign correspondent,” he says. “I’ve been based in Mexico City, Moscow, and Jerusalem. And then I came here to [New York]. I’ve got a great interest in documentary [after seeing documentary films] portray some of the places that I have reported from. Particularly, while I was based in Jerusalem there were a couple of big film festivals in Israel that featured a lot of documentaries. I was always astonished by the capacity of people to produce films on new subjects in this place where there’s the highest concentration per meter of journalists in the world. It feels like [everything has] been reported, yet every year there’d be things [in these documentaries] you had never heard before.”

The Economist Film Project was announced in December, 2010, but it had been in development for months earlier. During its development, the Project embarked on an extensive outreach campaign, beginning with a series of discussions — a “road show” — with veteran documentarians and film professionals. The feedback they received shaped the design of the program as well as gave the Project a base of filmmakers primed to submit their work. Following the announcement, media promotion followed, including ads on Facebook and Google and filmmaker-oriented websites like indieWIRE and Filmmaker. The Economist Film Project has also sponsored events at Sundance, the Cinema Eye Honors, and has reached out to film schools. The goal has been to make sure that the entire documentary community, including both established as well as new filmmakers, knows about the project.

For The Economist, says Lichfield, the project is intended to reach new audiences and show that “The Economist brand is broader than just the magazine” — a goal embodied by other current ventures too, including “e-learning courses for executives.” For documentary filmmakers, The Economist Film Project is, of course, about exposure for both films and subjects. There are relatively few national television platforms that regularly feature documentaries — especially those not opening in the theaters that weekend — and The Economist Film Project could become an important stop on a path towards their greater public awareness. In addition to their play on the News Hour itself, the film segments will also appear on The Economist’s website and The Economist’s YouTube channel, “500,000-strong Facebook page,” and PBS News Hour website, always accompanied by relevant articles. If the complete film is available elsewhere — on iTunes, for example — the Economist will link to these other outlets.

For more information on The Economist Film Project, and to learn more about submitting a project, visit its website.